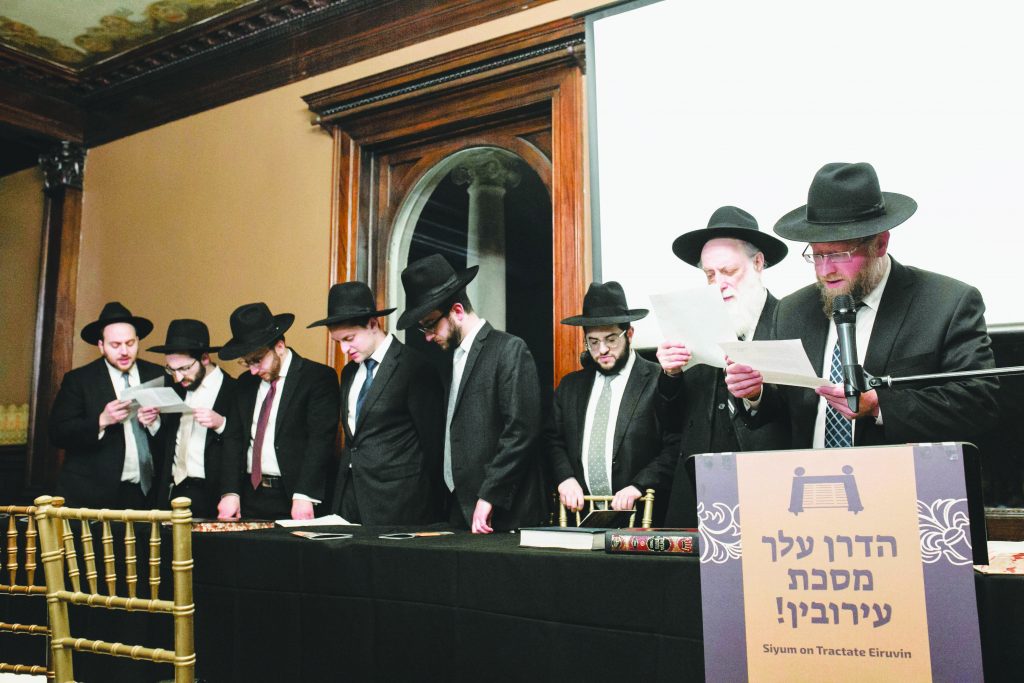 On Wednesday evening, January 30, in the midst of the polar vortex, the Minneapolis community gathered en masse to celebrate a siyum on Maseches Eruvin, marking the completion of this monumental masechta by 11 yungeleit of the Minneapolis Community Kollel.

Rabbi Avigdor Goldberger, Menahel of the kollel, explained, “At the time of the siyum, the temperature in Minneapolis was -20 degrees. School had been canceled, and many businesses were closed. We hosted the siyum at the Semple Mansion, and earlier in the day, the owner of the mansion called and said that we needed to cancel, because no one will show up, and in addition, the elevator was frozen, and part of the program was scheduled to be held on the third floor.

“I responded that people would come, because they are machshiv Torah, and that we would get volunteers to carry the food and other supplies up the stairs. In the end, an overflow crowd of over 200 people came. It was absolutely incredible!”

The kollel arranged for complimentary valet parking and gave out hand warmers to all the guests. Once they arrived inside the mansion, it was warm, cozy and pleasant.

There were some challenges, including the cancellation of many flights, which precluded the attendance of some of the parents of the yungeleit, who had planned to attend. (Other families arrived earlier and were able to participate in the siyum.)

In addition, Harav Uren Reich, Rosh Yeshivah of Woodlake in Lakewood, New Jersey, was scheduled to attend as the guest speaker. While he was not able to attend personally due to the canceled flights, he shared his divrei chizuk via live hook-up.

The celebration began with a seudah for the yungeleit, their families, and out-of-town guests, held in the grand ballroom on the third floor of the mansion. Rabbi Yaakov Skolnik, one of the yungeleit, said the Hadran and Kaddish, in memory of his father, Reb Zelig ben Aryeh Leib, z”l.

Rabbi Meir Yehuda Lichtman, Menahel of Yeshivas Meor HaTorah in Chicago, whose son and son-in-law both learn in the kollel, delivered divrei brachah.

After the seudah, the celebration moved to the grand foyer, on the ground floor of the mansion, and included the participation of over 200 community members.

The Rosh Kollel, Harav Chaim S. Gibber, emphasized the tremendous accomplishment of the yungeleit, having completed Eruvin over a two-year period. He asserted, quoting the Gra, that a siyum is a simchah both for those who are mesayem, and for those who are attending, and both enjoy equal reward.

Harav Uren Reich explained that when a person comes to a siyum, it demonstrates his understanding of the value of Torah. The community is saying to Hakadosh Baruch Hu, “You can send the most freezing weather, but we will still be there to participate. We know what this town gains from having bnei Torah that understand dedication to Torah.”

The Chazon Ish, zt”l, wrote how much a community is elevated by having an environment of talmidei chachamim, and Rav Reich praised the Minneapolis community for recognizing this.

“You should continue to grow and flourish spiritually in every area,” Rav Reich concluded, “and we should be zocheh to the ultimate simchah of the binyan Beis Hamikdash, bimheirah biyameinu.”

Following Rav Reich’s address, Rabbi Yossi Lowinger, Rosh Chaburah of the kollel, said the Hadran at the second siyum made for the entire community, and all went back up to the third floor for a hot buffet and dancing, accompanied by music from Yisroel Appelbaum from Lakewood.

“The dancing just went on and on. People did not want to stop, as there was such a strong feeling of simchas haTorah,” recalls Rabbi Goldberger.

“I received so much wonderful feedback. One attendee told me that it was the nicest event he ever attended in Minneapolis, and yet another said, ‘Now I understand why I am connected to the yungeleit.’”