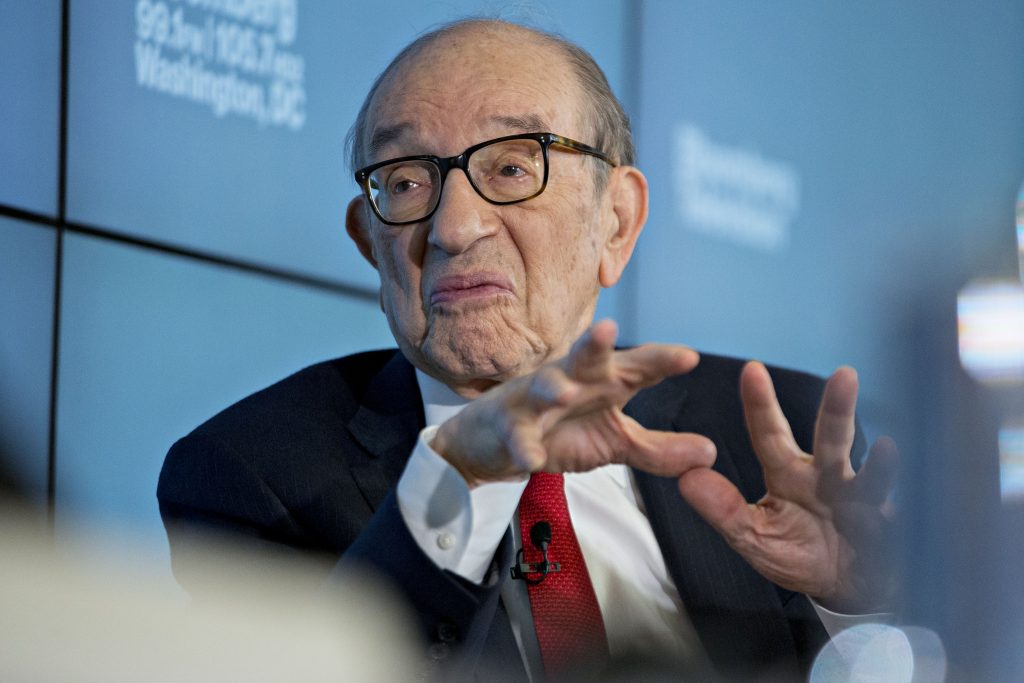 While American politicians on both sides of the aisle have been mostly silent as the U.S. deficit swells toward $1 trillion and beyond, former Federal Reserve Chairman Alan Greenspan says the lack of attention won’t last.

“This is an extremely imbalanced situation,” Greenspan, who led the Fed from 1987 to 2006, said in a phone interview. “Politically, budget deficits really don’t matter. What matters is the consequences.”

For Greenspan, 92, the ultimate concern is inflation. The last time the nation had to plug a shortfall this large was in the wake of the recession that ended in 2009. Now the economy is in its 10th year of expansion, with the tightest job market since the 1960s.

Inflation is under control — data Wednesday may show it’s the tamest since 2016. But should investors start to worry that U.S. spending will spur price pressures, they could curtail purchases of Treasuries at a time when a key source of demand ؅— international buyers — is already waning.

“It is only when eventually the budget deficits, as they always do, engender inflation that you get the political system responding,” Greenspan said. “We see right now the beginnings of stagflation, but we are not there yet,” he said, referring to a mix of slow growth and high inflation.

The federal deficit will exceed $1 trillion in fiscal 2022, according to the Congressional Budget Office. In Donald Trump’s first full fiscal year as president, the shortfall grew to $779 billion, the highest since 2012, even as tax cuts boosted growth. Deficits were already on course to worsen amid rising outlays for entitlements and interest expenses.

The deteriorating fiscal backdrop combined with the Fed’s move to shrink its balance sheet led the Treasury to boost net issuance to $1.34 trillion in 2018, more than double the level of 2017. Beth Hammack, chair of the Treasury Borrowing Advisory Committee, said in a report to Treasury Secretary Steven Mnuchin last month that U.S. borrowing needs may tally more than $12 trillion over the next decade.

While fiscal hawks on Capitol Hill seem few and far between, investors and business leaders are raising red flags.

Although so far the U.S. has avoided having to offer higher yields as it ramps up borrowing, Mark Kiesel of Pacific Investment Management Co. says that won’t last. That’s because foreign demand is ebbing, and he sees more upside than downside risk to inflation. DoubleLine Capitals Jeffrey Gundlach has also sounded alarm bells, calling the increased debt load a “horrific situation.”

Ten-year Treasury yields were at 2.69 percent Wednesday, having dropped from a seven-year high of 3.26 percent in October.

Former Starbucks CEO Howard Schultz, who is considering running for president in 2020 as an independent, last month said the debt overhang is an example of both major parties’ “reckless failure” regarding their constitutional responsibility.