General So Far, So Good, Mnuchin Says of Trade Talks in China 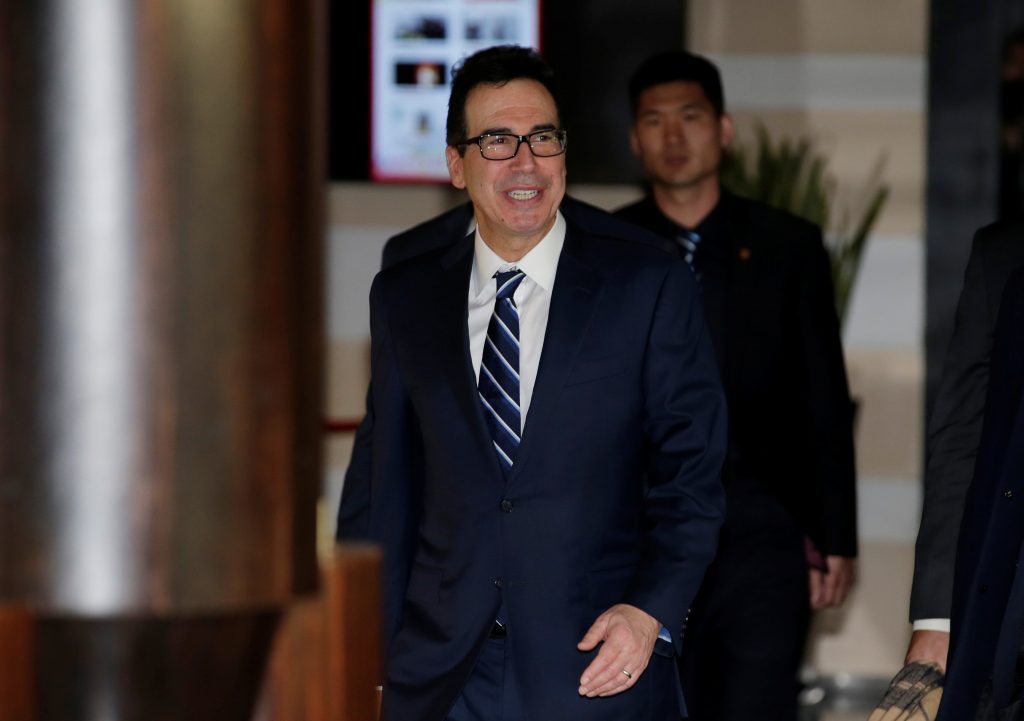 U.S. Treasury Secretary Steven Mnuchin said trade talks with China went well on Wednesday, as the world’s two largest economies try to iron out an agreement to resolve their dispute.

“So far, so good,” he said when asked by reporters on how the meetings in Beijing went. He did not say who he met.

Mnuchin said earlier he hoped for “productive” trade meetings as the two countries seek to end a festering dispute that has seen both sides level tariffs at one other.

U.S. tariffs on $200 billion worth of imports from China are scheduled to rise to 25 percent from 10 percent if the two sides cannot reach a deal by March 1, increasing pain and costs in sectors from consumer electronics to agriculture.

Asked by reporters as he left his Beijing hotel what his hopes were for the visit, Mnuchin said “productive meetings.” He did not elaborate.

Mnuchin, along with U.S. Trade Representative (USTR) Robert Lighthizer, arrived in the Chinese capital on Tuesday.

U.S. President Donald Trump said on Tuesday he could let the deadline for a trade agreement “slide for a little while,” but he would prefer not to do so. The president said he expects to meet with Chinese President Xi Jinping to close the deal at some point.

Trump’s advisers have described March 1 as a “hard deadline,” but Trump told reporters a delay was now possible.

He said in December that the 90-day truce could be extended, but that he could revert to tariffs if differences could not be resolved.

Speaking to Fox News on Wednesday, White House Press Secretary Sarah Sanders said: “We’ll see what happens on whether or not the president makes a move to change the deadline.”

She also raised the possibility of a meeting between the leaders of the two economic superpowers, saying Trump’s personal retreat of Mar-a-Lago in Florida would make a good venue.

“It will ultimately take … President Trump and President Xi sitting down face-to-face figuring that out and getting that final deal because they are the only two that’ll ultimately be able to nail that down,” Sanders said.

A growing number of U.S. businesses and lawmakers have expressed hopes for a delay in the tariff increase while the two sides tackle the difficult U.S. demands for major structural policy changes by China. They include ending the forced transfer of American trade secrets, curbing Beijing’s industrial subsidies and enforcing intellectual property rights.

Trump said last week he did not plan to meet with Xi before the March 1 deadline.

Mnuchin and Lighthizer were scheduled to hold talks on Thursday and Friday with Vice Premier Liu He, the top economic adviser to Xi.

The latest round of talks in Beijing kicked off on Monday with discussions among deputy-level officials to try to work out technical details, including a mechanism for enforcing any trade agreement.

China’s Foreign Ministry referred questions on the talks to the Ministry of Commerce, which did not respond to a request for comment.

A round of talks at the end of January ended with some progress reported but no deal and U.S. declarations that much more work was needed.

James Green, a senior research fellow at Georgetown University, believes China was looking to secure an Xi–Trump meeting in the hope that it would make a near-term deal on tariffs far more likely.

“From their point of view, they would have dodged a bullet,” Green, who was USTR’s top official at the U.S. embassy in Beijing until mid-2018, told Reuters by telephone.

But there is growing bipartisan concern in the United States about increasing state control of China’s economy, military activity in the South China Sea, and security issues around its technology companies.

Even if the two sides could come to terms on tariffs, that might not mean an end to trade friction, Green added.

“I think that whatever we might get for an agreement, it will be a pause, because the U.S. government is still going to move forward in the telecoms sector, on law enforcement and legal action, and on sanctions-related issues.”

U.S. Secretary of State Mike Pompeo cautioned allies on Monday against deploying equipment from Chinese telecoms giant Huawei Technologies Co Ltd on their soil, saying it could make it more difficult for Washington to “partner alongside them.”

The United States and its Western allies believe Huawei’s apparatus could be used for espionage, and see its expansion into central Europe as a way to gain a foothold in the European Union market.

Both the Chinese government and Huawei have dismissed these concerns.