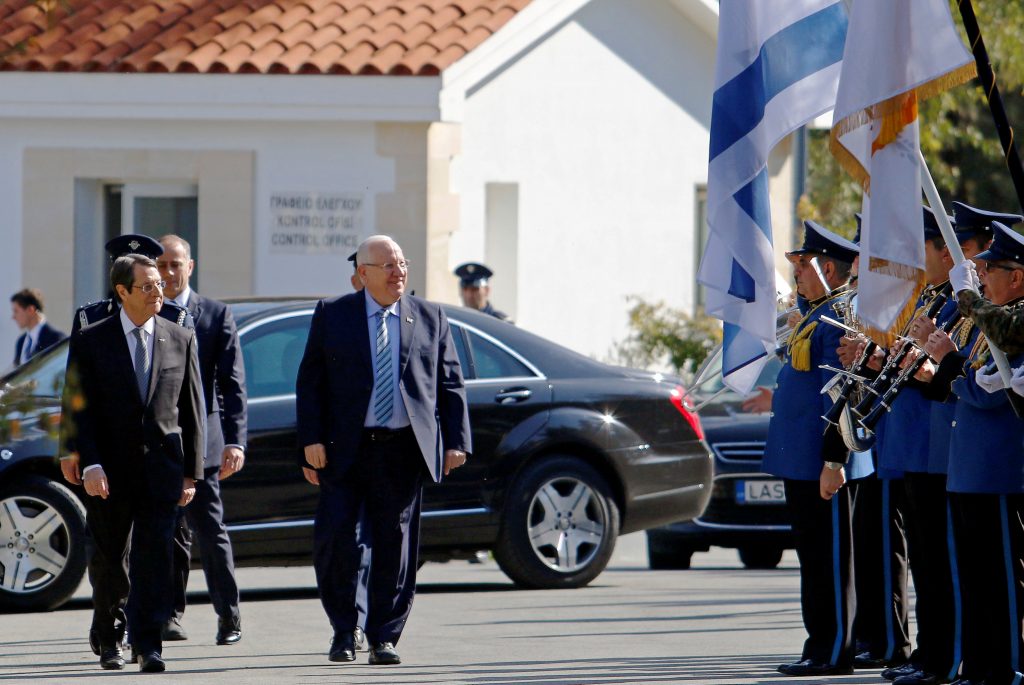 President Reuven Rivlin on Tuesday hailed his country’s flourishing ties with Cyprus, saying that cooperation between the two neighbors on intelligence, security and terror prevention has made the eastern Mediterranean “much, much safer.”

“Security ties between our two countries have never been better,” Rivlin said after talks with Cypriot counterpart Nicos Anastasiades during a visit to the island nation.

“Our navies and commando units share space, knowledge and experience,” he added, without elaborating.

Rivlin said the prime focus of the strategic partnership that includes Greece is developing the East Med gas pipeline that “could be one of the greatest underwater projects in the world.”

The envisioned pipeline would carry natural gas from deposits in the eastern Mediterranean to Europe via Greece and Italy.

Anastasiades said Cyprus and Israel share a joint commitment to the East Med project that would diversify Europe’s hydrocarbons supply and bolster its energy security.

“Our synergies are beacons of hope,” Anastasiades said.

Israeli-Cypriot relations have blossomed in the last decade following gas discoveries in waters off both countries. Israeli company Delek has a stake in Cyprus’ Aphrodite gas field, which lies close to Israel’s massive Leviathan deposit.

Currently, energy companies including Italy’s Eni, France’s Total and ExxonMobil are involved in a hydrocarbons search in the waters of Cyprus’ southern coastline.

Turkey, however, insists the exploration infringes on its rights and the rights of breakaway Turkish Cypriots to east Mediterranean hydrocarbon reserves. Turkish Foreign Minister Mevlut Cavusoglu said last month that Turkey planned to send a ship to search for gas around Cyprus.

Rivlin said energy cooperation in the eastern Mediterranean could also benefit Egypt, Jordan and the Palestinians. He said he discussed with Anastasiades the possibility of expanding the Israel-Cyprus-Greece partnership to include other countries.