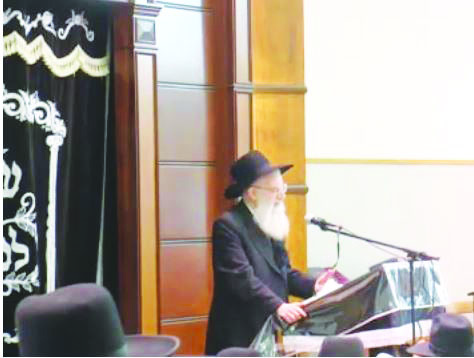 “Vos vet zein mit di meidele?” Eighty-four years ago, when the wife of Harav Avraham Kalmanowitz, zt”l, who was serving as the Rav of Tiktin at the time, passed away, many expressed their apprehension about the future of the young orphaned girl, a mere 10 months old. Who would raise her and guide her in the ways of her ancestors? As a granddaughter of Harav Chaim Shlomo, zt”l, one of the asarah batlanim who learned in the kloiz of Vilna, and the granddaughter of the Mareh Kohein, Harav Betzalel Hakohein, zt”l, of Vilna, she indeed had a lineage and a legacy to uphold. Who would instill in her the mesirus nefesh and ahavas haTorah to raise her family in the ways of her forebears?

Yet Rebbetzin Devorah Svei, a”h, did in fact live her life with just those traits; she assisted and supported her husband, Hagaon Harav Elya Svei, zt”l, the esteemed Rosh Yeshivah of the Yeshiva of Philadelphia and Rosh Moetzes Gedolei HaTorah of Agudas Yisrael, with devotion and distinction. She raised a family of Gedolei Torah and educated generations of Yiddishe kinderlach as a teacher for over half a century.

In an emotional hesped on Monday morning, Hagaon Harav Shmuel Kamenetsky, shlita, bemoaned the loss of Rebbetzin Svei by describing the mesirus nefesh she displayed by moving to Philadelphia more than 60 years ago. “Who knew what was in store for her children? Yet she raised a mishpachah mefu’eres, and left over beautiful doros. Everything she did was with shalom and shalvah. She made an indelible impression on the community of Philadelphia as she touched her students’ hearts.”

Her son, Harav Shimon Yehudah Svei, who succeeded his father as Rosh Yeshivah of Philadelphia, spoke of the manner in which his mother was mevatel herself to his father. “All that he built, the yeshivah, his talmidim, the family, was all possible because of the mesirus nefesh she had. She was the consummate eishes chaver. As long as she was with us, the influence of my father, too, remained. Now, it is as if we are losing both at once.”

Harav Osher Kalmanowitz, Rosh Yeshivah of Mirrer Yeshiva, spoke of her caring for every member of the family, as well as her commitment to the mitzvah of halva’as hameis that she performed with great tznius. Although she always attended each family simchah, there was one time when she was not able to come to New York due to her commitment to performing a chessed shel emes. Nevertheless, she took a train to New York to attend a sheva brachos so that she could participate in the simchah.

The Mirrer Rosh Yeshivah explained how his aunt had a portion in all the myriad deeds of her illustrious husband by pointing out that the prohibition to remove the badim (poles) from the aron is mentioned before the Torah tells us to place the luchos inside of it. “This teaches us,” said Rav Kalmanowitz, “that the badim which carry the aron were part and parcel of the tavnis [structure] of the aron itself. So, too, Rebbetzin Svei, who enabled her husband to lead a generation, had a chelek in all his endeavors.”

“Rav Elya spent thousands of hours giving advice and encouragement to people from all walks of life. At 2:00 a.m., he was on the phone answering questions posed to him by people from Los Angeles. All this was facilitated by the constant devotion of Rebbetzin Svei.”

Talmidim relate that on Friday nights, after they completed the seudah, they would gather in Rav Elya’s house where he would deliver a shmuess. Rebbetzin Svei would prepare an elegant arrangement of food, and could be seen positioned behind the door, listening intently to the words her husband was telling his talmidim. Indeed, her mechutan, Harav Abba Brudny, described this middah as nireh ve’eino nireh — she was seen through her actions, which were performed with such tznius that they left her nearly undetectable.

Despite this attribute of shunning the limelight, she nevertheless showed tremendous caring for these talmidim. A former talmid had done a successful business deal and wished to donate the maaser from the profits to the yeshivah. He wished to honor the Rebbetzin by delivering the donation directly to her, so he drove down to Philadelphia to hand her the check. Upon his arrival, he was told the Rebbetzin was not home and would not return until late in the afternoon, since she had gone to deliver soup to a former talmid, one of the first talmidim of her husband, who was in the hospital.

“Why will it take her so long to return?” he asked.

“Because she took the train to the hospital,” he was told, “and will be returning by train as well.”

“I’m shocked that no one offered to drive her,” he exclaimed. “She is already getting on in her years. Couldn’t one of the talmidim have driven her to the hospital and brought her back?”

“We begged her to let us drive her,” they responded, “but she absolutely refused. She said she would never take a talmid away from his Gemara for her personal needs.”

Rebbetzin Svei exemplified the middah of histapkus, refraining from partaking in unnecessary comforts. A talmid once joined the Rosh Yeshivah for the seudah on Hoshana Rabbah and noticed a challah shaped in the form of a hand. Rebbetzin Svei explained that Rav Elya’s mother had had this minhag, since on Hoshana Rabbah we receive our kvittel for the new year, and the “hand” was to “receive” the kvittel.

“Does the Rebbetzin bake shlissel challah as well?” he asked. “We do not do segulos for extra parnassah,” she replied, implying that what little they had was enough for their needs.

Her home was bare, and she was happy with the little she had. There was a time when some talmidim wished to replace the bare carpeting in her home; they were met with her staunch refusal. Yet her frugal ways were limited to her own affairs; when it came to the concerns of others, she was joyful to see to their comfort, and she fahrgint them with a full heart.

Di meidel, who grew up in the home of Hagaon Harav Chaim Ozer Grodzensky, zt”l, and was even fed by the Gadol Hador, developed her unique style of mesirus nefesh, ahavas haTorah and middos, which guided her to be the ezer k’negdo of her illustrious husband and sustain him and his talmidim throughout her life.