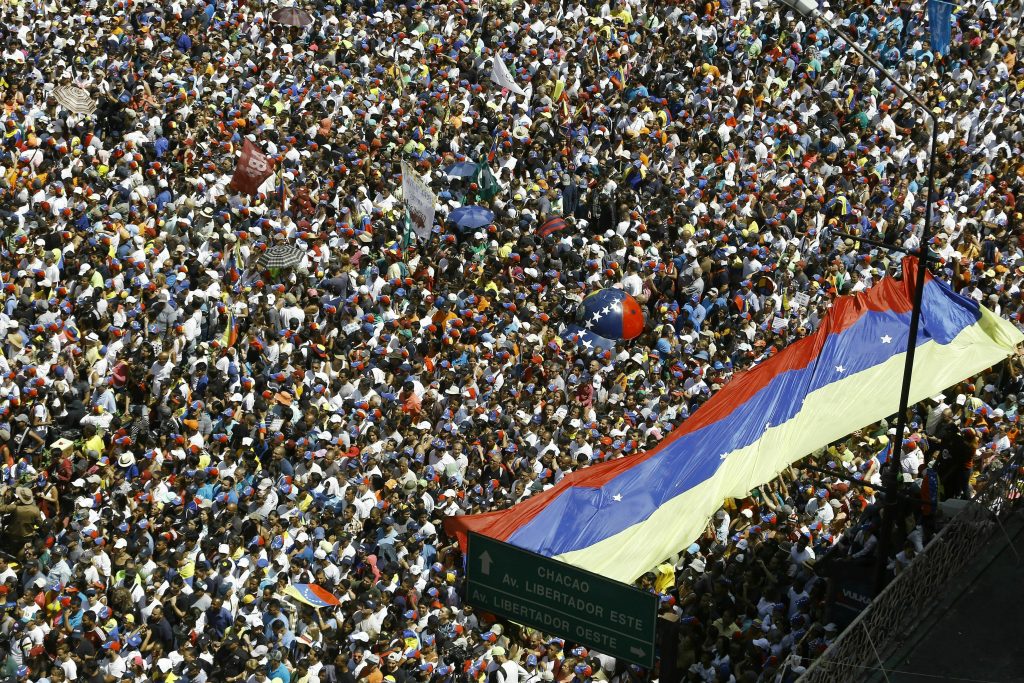 Opposition leader Juan Guaido called Tuesday for mobilizing caravans of Venezuelans to bring emergency food and medicine across the border from Colombia in a daring plan to outmaneuver President Nicolas Maduro.

With thousands of cheering supporters surrounding him, Guaido set Feb. 23 as the date for bringing in the badly needed U.S. assistance, but provided no details.

That means another 11-day wait for the aid, which has been warehoused on the Colombian border since last week — and a full month since Guaido declared himself Venezuela’s rightful president — a timeline that threatens to deflate momentum toward unseating the entrenched socialist leader.

“Right now, I’m going to give this order to the armed forces,” Guaido told the mass of people gathered in Caracas. “Allow in the humanitarian aid. That’s an order.”

Despite that authoritative assertion, there has been little evidence that the allegiances of the security forces — the country’s key powerbroker — have swung behind Guaido, a virtually unknown lawmaker until last month, when he took the helm of the opposition-controlled National Assembly.

The 35-year-old lawmaker has rallied masses of Venezuelans into street demonstrations that have left at least 40 dead since he declared himself interim president on Jan. 23.

On Tuesday, he told supporters that thousands of volunteers he’s recruited online will help organize the food and medical supplies and help get them across from Colombia. He also announced a second collection point for aid to be brought in from Brazil.

Using such popular mobilizations carries the risk of more violent confrontation with the armed forces, a fact that opposition leaders acknowledged on Tuesday.

Jose Manuel Olivares, Guiado’s representative in helping lead the aid mission from Colombia, said he and other lawmakers plan to be at the front of the Feb. 23 push to get the aid in, even if it means risking their lives.

“We have never told people to do something we are not willing to do,” he said. “We’re going to be there with people taking the risk.”

Maduro backers, meanwhile, gathered Tuesday in a square in the capital, cheering and waving flags. They spoke out on state TV against intervention from what they called the “U.S. empire,” saying that Maduro is Venezuela’s rightful president.

“We know that behind this supposed humanitarian aid is the intention to intervene in Venezuela,” Vice President Delcy Rodriguez said on state TV. “It’s a cheap show.”

Maduro says the humanitarian aid is part of a U.S.-led coup to topple him and won’t let it across the border. Venezuela’s military last week barricaded a key bridge between Venezuela and Colombia in an apparent attempt to keep the aid from entering.

On Tuesday, protesters called on Maduro to relent, citing epidemic hunger and illnesses that can’t be treated in Venezuela, once among Latin America’s wealthiest nations, with the world’s largest oil reserves.

“Nicolas Maduro should put his hand on his heart and accept that aid,” said Mayerly Prada, among a group of protesters on the Colombian side of the Tienditas International Bridge. “It’s help for many Venezuelans like my son.”

Prada, a 24-year-old mother of two, said she left her home in Venezuela last week after her 2-year-old son came down with a rash and he wasn’t able to get treatment at home. She hoped to get medicine and return to Venezuela.

Juan Carlos Capacho, a councilman from the Colombian border city of Cucuta, which has been inundated with Venezuelan migrants, said the outcome depends on what the people of Venezuela do next.

“The call to the Venezuelan people is to get out and define their destiny,” he said. “We are certain there is no barricade, no chain, no obstacle that can detain the march of history.”