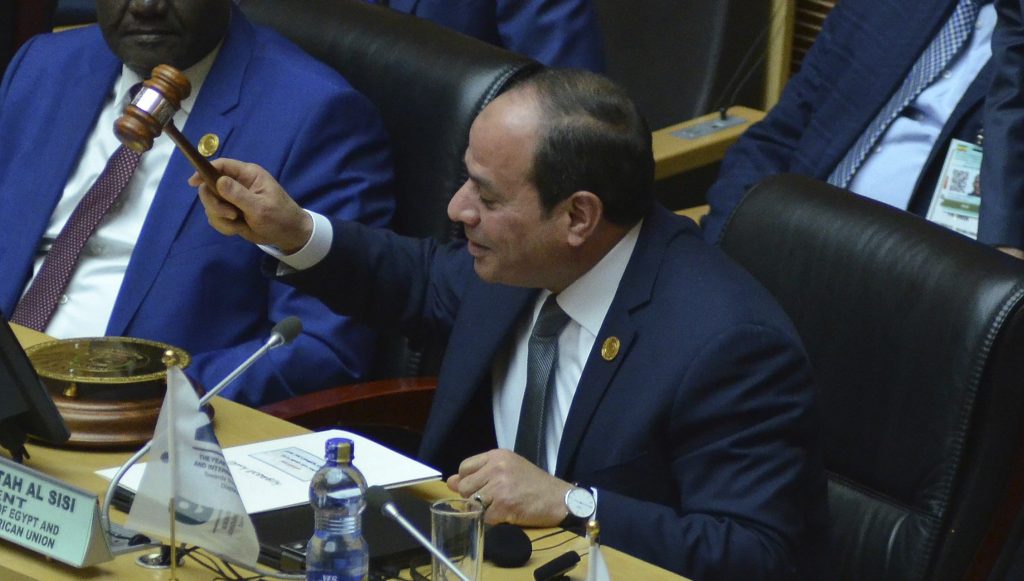 Egypt’s President Abdel Fattah el-Sisi has been elected chairman of the African Union at the continental body’s summit in Ethiopia.

Also at the African Union meeting Sunday, a statue of Ethiopia’s last emperor was unveiled. Afterward a scuffle erupted between security guards for some African leaders and African Union guards, causing a delay in the entry procession of the heads of state into the main meeting.

El-Sisi addressed the summit after being elected the new chairman, saying he would focus on security on the African continent.

“Our work must continue to improve peace and security in Africa in a holistic and sustainable manner,” el- Sisi said. “Mediation and preventive diplomacy will remain one of the priorities of the African Union.”

The new African Union chairman said that “counter-terrorism requires the identification of those who support and finance it and combating them collectively. While we are aware of the difficulty and complexity of the struggle, this remains the only appropriate way to uproot terrorism and eradicate it.”

“During his time in power President Abdel Fattah el-Sisi has demonstrated a shocking contempt for human rights. Under his leadership the country has undergone a catastrophic decline in rights and freedoms,” said Najia Bounaim, Amnesty’s North Africa Campaigns Director. “There are real fears about the potential impact his chairmanship could have on the independence of regional human rights mechanisms and their future engagement with civil society.”

The rights group said Egypt since 2015 has orchestrated a sustained political attack against the African Commission on Human and Peoples’ Rights, the body that aims to monitor African states’ human rights records. “Dozens of cases alleging serious human rights violations have been lodged against Egypt at the ACHPR,” it said.

Egyptian leaders have been absent from African Union meetings since 1995 when an assassination attempt was made on the life of former leader Hosni Mubarak.

African Union chairmen set agendas of issues to be addressed during their one-year tenure.

During his tenure, Kagame dramatically challenged the election results in the Democratic Republic of Congo.