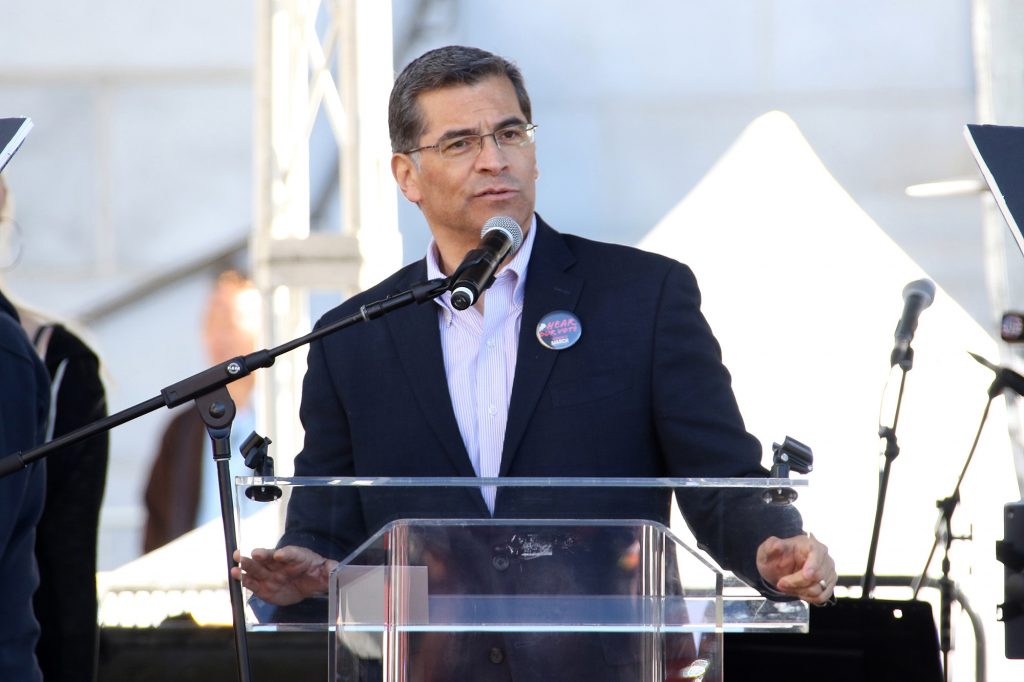 California Attorney General Xavier Becerra warned in a nationally broadcast address Tuesday that he is prepared to take President Donald Trump to court if he declares a national emergency to fund a wall at the U.S.–Mexico border while cutting federal funds to fire-damaged communities in this state.

Becerra delivered the remarks as part of the Democrats’ Spanish-language response to Trump’s State of the Union address. Speaking of his own upbringing as the son of Mexican immigrants, he denounced the president’s characterization of immigration, and the partial government shutdown over the construction of the wall.

“What we heard tonight was the same tired refrain of building walls,” Becerra said in a speech given at Sacramento’s C.K. McClatchy High School, the attorney general’s alma mater. “The idea of declaring a nonexistent state of emergency on the border — in order to justify robbing funds that belong to the victims of fires, floods, hurricanes and droughts — to pay for the wall is not only immoral, it is illegal.

“We are ready to reject this foolish proposal in court the moment it touches the ground,” Becerra told an audience of students and parents.

The attorney general’s statements come after a recent social media post in which the president threatened to cut off federal disaster relief money sought by California for areas hit by deadly wildfires.

In January, Trump tweeted that he ordered the Federal Emergency Management Agency not to send more disaster funding to state officials “unless they get their act together, which is unlikely.”

The border wall “is not the only wall that this administration is trying to build,” Becerra said in the prepared remarks. “They are putting a wall between you and your doctor, dictating what services you can receive.”

Becerra, 61, also accused the Trump administration of putting a wall up between voters and the ballot box, and between veterans and health care.

“They’re putting a wall between parents and their children, by putting children in cages away from their families,” the attorney general said.

Becerra’s response, which was carried by Spanish-language networks Univision and Telemundo, will further burnish his credentials as a national figure in the Democratic Party’s resistance to Trump, said Bob Shrum, director of the Center for the Political Future at the University of Southern California.

“He is one of the leading Latinos in American politics. He’s a natural choice to do this,” Shrum said. The national appearance, he added, “just adds to the sense that he’s an important figure who can speak for the party.”

As attorney general, Becerra has gone to court 45 times with legal challenges to the Trump administration over federal actions on issues including immigration, health care, the environment, the U.S. census, education and the internet.

The lawsuits include nine actions over immigration, including a case that has temporarily halted the termination of the Deferred Action for Childhood Arrivals program, which provides temporary protections to some 800,000 immigrants who were brought to the country illegally as children.

Other pending cases include a lawsuit filed to challenge the construction of the border wall in San Diego and Imperial counties and the separations of migrant families at the southwestern border.

In announcing that Becerra was chosen for the speech, Senate Minority Leader Charles E. Schumer, D-N.Y., praised what he called “his moral and vigilant leadership.”

Becerra rose to prominence during 24 years in Congress representing Los Angeles before then-Gov. Jerry Brown appointed him the first Latino attorney general in California history. Becerra has been seen as a rising star in the party and a potential future candidate for governor or U.S. Senate.

In his speech, Becerra said his parents came to the U.S. from Guadalajara, Mexico, “to work hard and give their children a better life,” as many other families have done.

“I know I am the product of those who fought to open the doors of opportunity,” he said. “The optimism — that characterizes the waves of immigrants who have come here — runs through my blood. And if the state of our nation can be characterized as ‘strong,’ it is because people like my parents — citizens or immigrants — built this country.”

He touted a historic Latino and Democratic voter turnout that helped flip control of Congress, and praised Democratic policies on gun control, climate change and immigration, including efforts to help “Dreamers,” young people brought into the country illegally as children.

“There is no country like the United States,” he said. “If America falls, everyone gets hurt. The State of the Union decides destinies.”

Becerra’s address was seen by some as another sign that California is leading the discussion among Democrats at the national level.

“His selection is an imprimatur to his ability to leverage the California platform to drive progressive values and a testament to the fact that for national Democrats California is not merely the heart of the resistance but the vanguard of the offensive,” said Chris Lehane, a Democratic political strategist who worked in the Clinton White House.