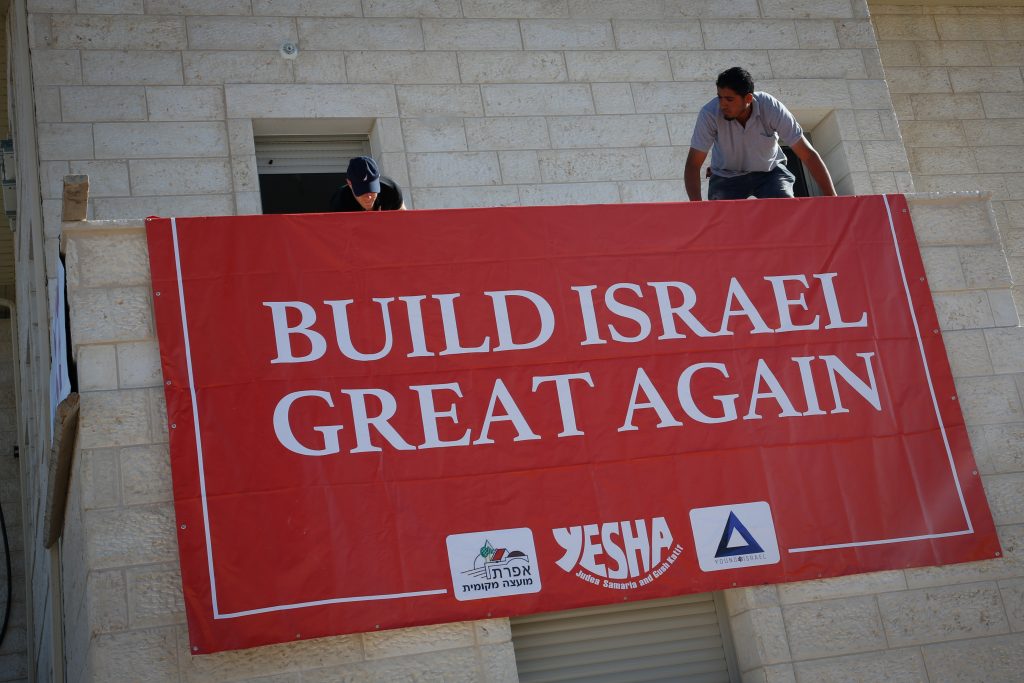 An Israeli demographic report on Tuesday said the number of people living in Yehudah and Shomron surged at a much faster rate than the overall population last year and predicted even more rapid growth, thanks to the policies of the Trump administration.

Baruch Gordon, director of West Bank Jewish Population Stats, said the White House has created a much friendlier environment, clearing the way for more construction in the coming years.

“It’s just simply opened up. There’s no longer this cloud looming over it,” Gordon said.

Gordon’s project conducts an annual study of official population data obtained from the Israeli Interior Ministry. The report is sponsored by “Bet El Institutions,” that has ties to some of President Donald Trump’s closest Mideast advisers.

In comparison, Israel’s overall population grew 1.9 percent last year to 8.907 million people, according to the Central Bureau of Statistics.

The Interior Ministry was not immediately able to confirm the scores of figures, but said it had been in touch with Gordon’s group and the numbers appeared authentic.

The data showed robust growth across the board, from large towns located near Israeli population centers to isolated communities deep inside Yehudah and Shomron.

Gordon cited several reasons for the rapid growth. An estimated two-thirds of the population in question are religious Jews, who tend to have larger families. In addition, he said the cheap costs of housing have lured many young families that cannot afford homes in Israel proper.

But he also said the Trump administration’s attitude is also having an effect.

President Barack Obama, like a string of Republican and Democratic predecessors, opposed the regional building as obstacles to peace and put heavy pressure on Israel to halt construction.

Trump, in contrast, has done little to stop the construction. While urging restraint at times, the White House has otherwise remained quiet as Israel has pressed forward with numerous developments.

This, in effect, has given Israel a green light to lay the groundwork for a surge in construction that should materialize over the next year or two, Gordon said.

“Since the change of the U.S. administration, the atmosphere for construction permits has become much easier. They’re being given with greater ease,” he said.

“I think possibly the next report and certainly in the ones after that, I think we’ll start to see a huge surge in the numbers here,” he added.

The figures did not include data for east Yerushalayim, where well over 200,000 Israeli Jews now live.

“The American support for settlements through silence is doomed to failure because there is no peace and stability without an agreement with the Palestinian people and its legitimate leadership,” he said.

A U.S. Embassy official said Trump has made his position on the matter “clear” and has received Israeli pledges to take his concerns into consideration.

“The administration is firmly committed to pursuing a comprehensive peace between Israelis and Palestinians,” the official said, speaking on condition of anonymity under diplomatic protocol.

The report echoed separate findings by Peace Now, a left-wing NGO that said last month Israel has pushed forward plans for thousands of new communities in the region since Trump took office. It also predicted a huge increase in construction in the next few years.

Gordon said the latest data should put an end to the international community’s longstanding support for a two-state solution.

“Those who continue to talk about a two-state solution, in my mind it’s just a sign that they’re removed from the reality and the facts on the ground,” he said.