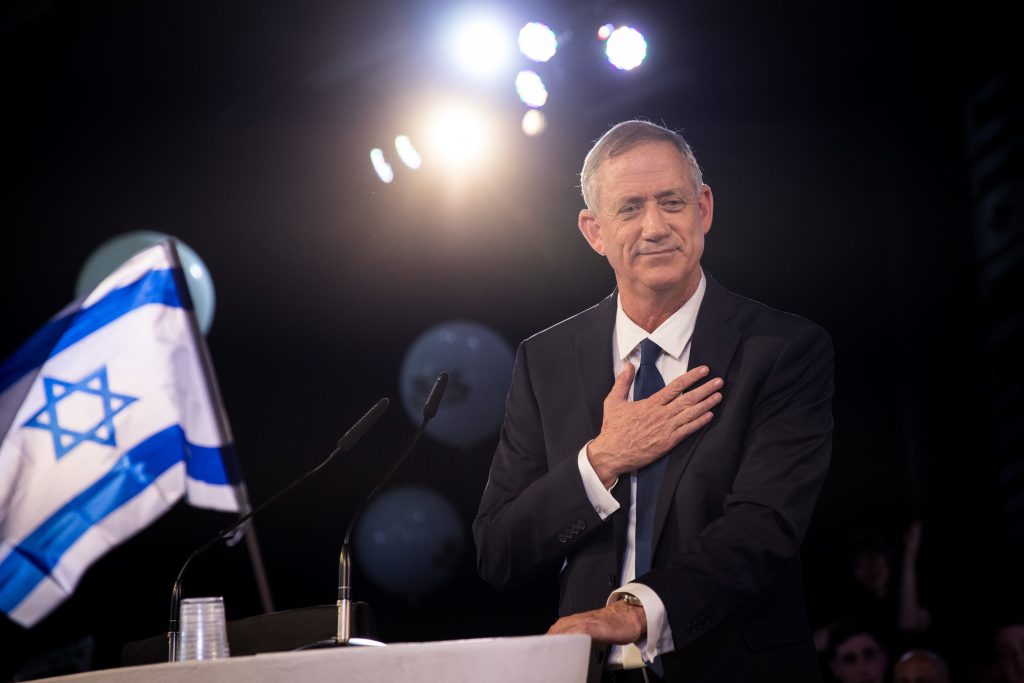 It did not take long for Prime Minister Binyamin Netanyahu and others on the right to find an opening in Benny Gantz’s election campaign once he started making speeches and giving interviews.

On Wednesday, as Netanyahu commented approvingly on the outcome of the Likud primaries, he seized on the opportunity to take a swipe at Gantz.

“I am very pleased that the Likud members have chosen, in a precise and democratic way, a strong, impressive list that is good for Israel,” Netanyahu said.

“But the trouble is that Mahmoud Abbas is also pleased, because Benny Gantz said today that he will carry out a second disengagement in Yehudah and Shomron, and Abu Mazen wished him success in the elections.

Gantz, responding in more combative tone than in recent appearances, shot back, “You expelled Jews. You paid protection money to Hamas. Your time has passed — we are moving on.”

A statement from Gantz’s Israel Resilience party said: “Netanyahu, who voted for the disengagement, and [Culture Minister Miri] Regev (Likud), who sold it with a smile on her face, won’t preach to us about diplomatic and national-security responsibility.”

During an interview released partially earlier in the day, when asked “if, in fact, you support something like the [2005] Disengagement,” from Gush Katif, Gantz seemed to do so.

“The disengagement was born of Israel’s diplomatic policy. The parties involved got very high grades for managing to prevent a rift in the nation as they carried it out,” Gantz replied.

“So you’re not saddened that we uprooted settlements from there?”

“It was a legal action,” Gantz said. “It was approved by the government of Israel and carried out by the IDF and the settlers, with great pain but done very well. We have to take its lessons and implement them in other places.”

The Likud party subsequently accused the former IDF chief of admitting he had plans to withdraw unilaterally from Yehudah and Shomron:

“We told you,” the party said, “Gantz will form a left-wing government with the help of a parliamentary bloc that relies on [Arab lawmaker Ahmad] Tibi and the Arab Joint List.”

Gantz disputed the Likud reading of his remarks, saying in a statement later that “the point about ‘lessons’ in his interview, was about ‘the importance of preventing a rift in the nation, and ensuring that our non-negotiable defense needs are part of any future policy.’”

“The Israeli public will not again support someone who proposes evacuating Jews from their homes, even if he does so humanely and with sensitivity,” Bennett said.

“After the elections, when the ‘Deal of the Century’ for the establishment of a Palestinian state comes, only one thing will be the deciding factor: Will this be a ‘BibiGantz’ government or a ‘BibiBennett’ government?”

“Only a strong New Right will prevent the establishment of a Palestinian state,” he concluded.