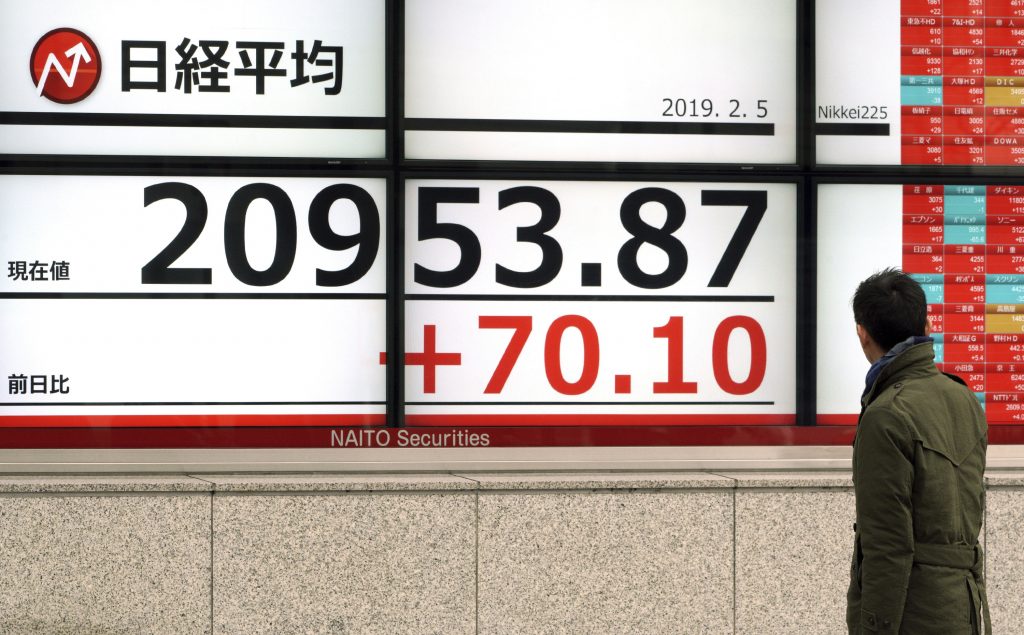 Europe’s miners and banks helped world stocks extend their white hot start to the year on Tuesday, while the dollar was straining for a fourth day of gains as traders waited for President Donald Trump’s State of the Union address.

The Federal Reserve’s cautious turn last month was continuing to drive up appetite for riskier assets but there were also a number of idiosyncratic factors feeding outsized moves.

News that oil giant BP had doubled it profits and another tick up in crude prices overnight pushed the oil and gas sector up 1.5 percent.

Miners were also up sharply as traders digested news that Brazil had ordered Vale, the world’s largest iron ore miner, to close eight of its dams following a deadly collapse that killed over 300 people last month.

Iron ore prices surged 14 percent at the end of last week in anticipation of the move and are now at a near two-year high.

“Our fundamental view is, there no reason for this incredible move, so is it just speculation, a frenzy about possible stimulus in China?” said Saxo Bank’s head of FX Strategy John Hardy. “What should we do with it? I don’t know, but it should be noted.”

China and large parts of Asia were closed for Lunar New Year celebrations overnight but the bits that were open made some headway too.

Japan’s Nikkei average marked its highest level in seven weeks at one point before fading to finish slightly lower.

Australian shares suffered no such fatigue. They jumped 2 percent, with long-battered financials surging on short-covering after a special government-appointed misconduct inquiry left the structure of the country’s powerful banks in place.

On Wall Street, the S&P 500 gained on Monday, with technology and industrials the biggest winners, 100-day moving averages sliced through and the VIX “fear gauge,” dropping to its lowest in four months.

With Europe continuing to rally, MSCI’s gauge of stocks across the globe reached a two-month high. It has just had its best January on record, rising more than 13 percent from a near two-year low hit in late December.

Having changed tack on rate rises last week the Fed took the unusual step of issuing a statement on Monday saying that its head, Jerome Powell, had told President Donald Trump and Treasury Secretary Steven Mnuchin that “the path of policy will depend entirely on incoming economic information.”

In the currency markets, the dollar held on to recent gains against its major peers as investors continued to lap-up Friday’s strong payrolls number and a manufacturing survey.

The dollar index against six major currencies was a fraction higher at 95.916, having gained 0.27 percent the previous day.

The euro weakened slightly to $1.1420, as data showing that Euro zone business growth almost stalled in January knocked it further away from a three-week high of $1.15405 set last week.

The Australian dollar gained 0.5 percent to $0.7260 , erasing earlier losses, after the Reserve Bank of Australia left policy unchanged at its first meeting this year, but sounded less dovish than the markets had wagered on.

The Aussie had earlier fallen as much as 0.5 percent after a slump in retail sales reinforced concerns about the health of the economy.

Traders’ focus was already shifting to President Donald Trump’s delayed State of the Union address, as well as U.S. ISM nonmanufacturing figures, also due later in the day.

Trump told a White House event over the weekend that he might declare a national “emergency” because Democrats in Congress weren’t moving toward a deal to provide money to build a wall on the border with Mexico. Such a step would likely prompt a court challenge from Democrats.

“If President Trump persists in his long-promised wall along the U.S.-Mexico border in the upcoming address, it would cap the dollar’s rally,” said Kengo Suzuki, chief FX strategist at Mizuho Securities.