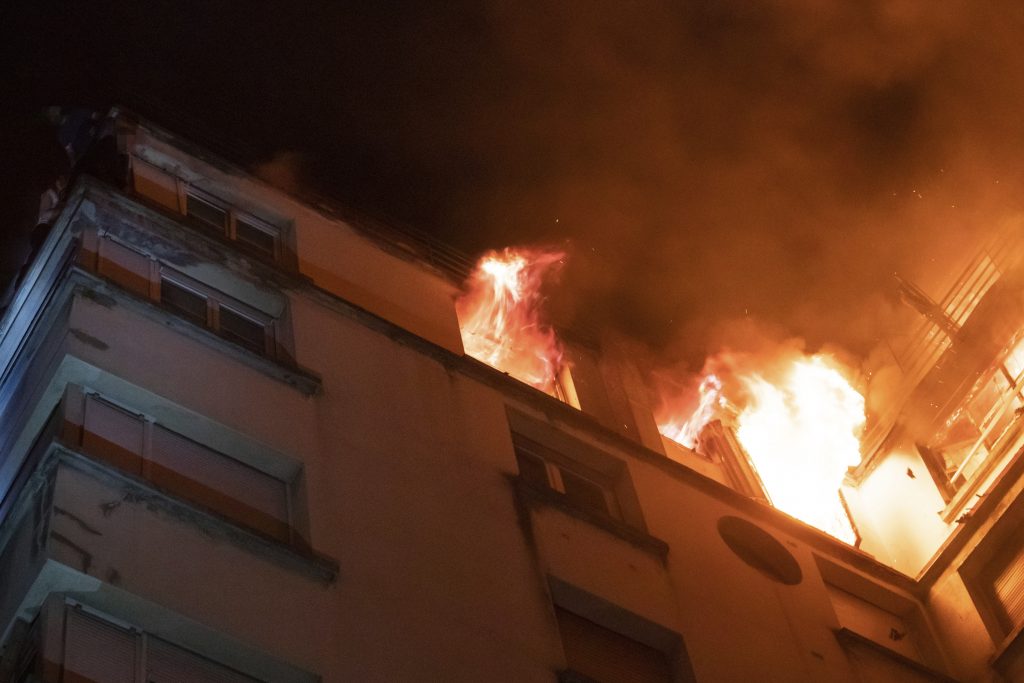 Paris’ deadliest fire in over a decade killed at least 10 people on Tuesday as flames engulfed a nine-story apartment building, sending residents to the roof and clambering across balconies to escape.

A 40-year-old woman who lived in the building, said to have a history of psychiatric problems, was arrested nearby and held on suspicion of having set the fire not long before. French police opened a criminal investigation for voluntary arson resulting in death.

Multiple neighbors said they heard the suspect and her neighbor, an off-duty firefighter, arguing over the woman’s music before the fire broke out.

Police responding to the dispute stopped by the woman’s apartment. The firefighter and his friend told officers they were leaving to sleep elsewhere in peace and thought the neighbor had lost her mind and one day there would be an accident because of her, according to a police report seen by The Associated Press.

In an interview with Le Parisien newspaper, the 22-year-old firefighter said he returned to the building a few minutes later, shortly after midnight, hoping the woman had gone. Instead, he ran into her in the stairwell, which was already beginning to smell of smoke.

“She wished me good luck, telling me that I loved flames,” he recalled in the interview.

Another resident later told him the woman put paper and wood in front of his apartment door, the firefighter told Le Parisien, which did not give his name.

Survivors described a chaos of smoke and flames, and the young firefighter said he ran upstairs to try and evacuate the building. One neighbor recalled clambering out of her eighth-floor apartment and over balconies to reach safety.

“I climbed across several balconies, with nothing beneath, and then was backed into a corner. There were people climbing hand-over-hand to get to where I was and escape the flames,” said a resident identified only as Claire, her eyes wide with shock soon after her rescue.

Another resident, an off-duty police officer, threw on clothes and rang doorbell after doorbell, trying desperately to alert his neighbors.

“I couldn’t save everyone. I can’t forgive myself,” the man identified as Fabrice told France Info radio, adding that smoke and flames prevented him from climbing higher than the fourth floor.

Jacqueline Ravier, who lives on the same street as the apartment building, described seeing a young man blackened by smoke and a woman motionless on the ground.

For hours, she said, flames shot out from the top of the building as smoke-covered victims fled. Shaken residents were brought to her building and the one next door.

Interior Minister Christophe Castaner spoke to reporters at the scene on Tuesday morning, as plumes of smoke speckled the sky.

“I want to salute the huge mobilization of the Paris firefighters,” he said. “More than 250 people arrived immediately and, throughout the night, saved over 50 people in truly exceptional conditions.”

It was the deadliest fire in Paris since the April 2005 hotel fire near the capital’s famed Opera that killed 24 people. Over 30 people were being treated for “relatively” light injuries, Castaner said. Among the injured were at least eight firefighters.

Authorities suspect the fire resulted from a criminal act, he said.

Officials said the suspect had “a history of psychiatric problems.”

A judicial official, who spoke on condition of anonymity as an investigation was ongoing, told the AP the woman was drunk when officers detained her.

A police patrol responding to a trash can fire around the same time spotted the woman with her hand in another trash can, according to a second police report obtained by The Associated Press. She was staring at the firetrucks streaming toward the building, the document states. The young firefighter said he saw her as well.

“She was waiting to see what would happen,” he said in the newspaper interview.

The document says the officers put the woman under brief surveillance and detained her at 12:45 a.m. after she allegedly tied a scarf around a car’s rear-view mirror and raised a cigarette lighter to it.

She was undergoing medical tests on Tuesday evening.

City fire service spokesman Clement Cognon told the AP that firefighters were going door-to-door to ensure there are no more victims, and to prevent residual fires.

“The situation was already dramatic when the firefighters arrived,” Cognon said.

Firefighters plucked some people from the roof and balconies, at one point pleading with a man to stay where he was. The fire was extinguished by midmorning.

Emergency workers also sought to shore up the building, which was badly damaged. Images released of the operation released by the fire service showed flames shooting out of windows and stretching across the upper floors.

The building is on rue Erlanger in the 16th arrondissement, one of the calmest and priciest districts of Paris.