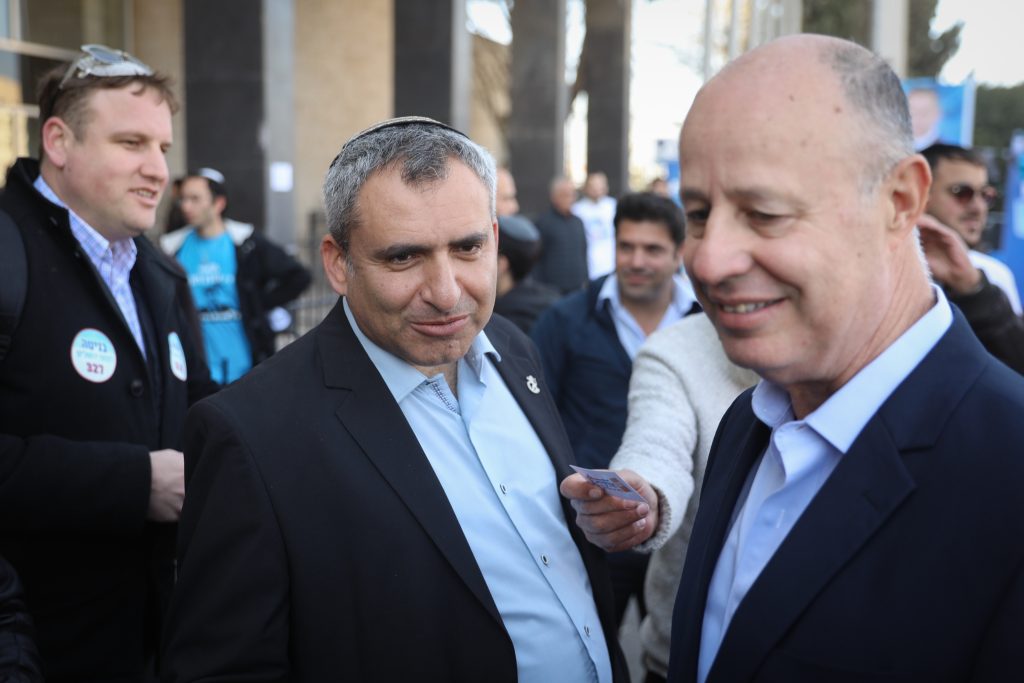 By the end of the day Tuesday, Likud members – and the rest of Israel – will know who will represent the party in the Knesset after the upcoming April elections. With polls consistently showing the Likud achieving around 30 seats, the Likud will be by far the largest single party in the Knesset – which means that regardless whether party head Binyamin Netanyahu forms the next government, Likud MKs will be prominent as ministers, Knesset committee heads, and lawmakers.

One hundred forty two candidates are running for the full party list of 120 candidates, but the fight among candidates is to get the party’s 120,000 voting members to place them as close as possible to the top of the list. There has been much wrangling and politicking among current MKs and potential candidates in recent days, as each tries to secure the support of interest sub-groups within the membership.

The most controversial issue in the primary has been the candidacy of Gideon Sa’ar, the former minister who six years ago quit the Knesset. At the time, Sa’ar said that he was taking a “time out,” but many believe that Sa’ar resigned because of personal tension between him and Netanyahu, with disagreements on several issues. Netanyahu is thought to have seen Sa’ar as a rival for the Likud leadership.

In recent months Netanyahu supporters have accused Sa’ar of conspiring with President Reuven Rivlin to recommend another MK to the president to form a government after the election, an accusation Sa’ar has rejected.

On Monday, Netanyahu’s son Yair made the accusation again, saying that Sa’ar and Rivlin are “looking for ways to get rid of my father.” Sa’ar again denied the charge, saying that he would commit to recommending Netanyahu to form the government.

The hostility Netanyahu has shown Sa’ar has created a significant schism among party members, many of whom still support him. On Tuesday, local authority heads in Yehuda and Shomron called on Likud members to choose Sa’ar among the slate of names they could submit.

“Gideon Sa’ar worked very hard against the disengagement and dispossession of the Jews of Gush Katif, and as Education Minister instituted school visits to Me’aras Hamachpelah. He also worked to construct the fence on the southern border to keep out illegal migrants.” Sa’ar “is among the best of the Likud and a loyal party member. We call on voters to show loyalty to Gideon, who has always been loyal to us.”

Also in question is the status of Communications Minister Ayoub Kara. While the relations between him and the Prime Minister have been excellent, media reports in recent weeks point to a growing division between the two, meaning that he may not get the full support he needs from Netanyahu to attain a high spot on the list. Kara until now has run on the Likud list in a spot that was reserved for a Druze candidate, but Likud officials recently decided to require him to run for a spot on the general list. As Kara’s natural base in the party is not considered strong, he is said to be in danger of falling to an “unrealistic” spot on the list – considered to be anything after the 25th slot.

Also at issue are reserved slots Netanyahu has sought on the list, which party members must approve on Tuesday as well. Netanyahu is said to be preparing for the possibility that smaller parties will merge with the Likud, as parties finalize their lists for the upcoming April elections.

Netanyahu has asked Likud members to allocate to candidates of his choosing the 21st, 28th, and 36th slots. In his appeal to members, Netanyahu wrote to members “given the likelihood of parties merging on the left as they attempt to replace the Likud in leading the country, I ask you to allow me to select three additional candidates for the Likud list.” In the previous election, Netanyahu was allocated two slots.