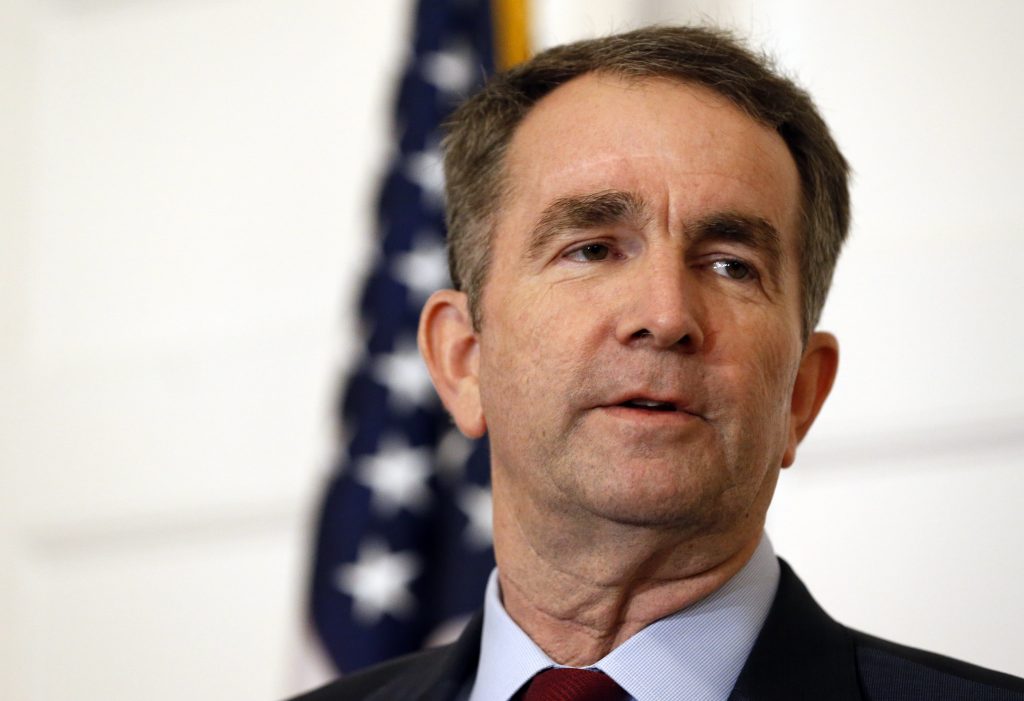 Virginia Gov. Ralph Northam met privately on Monday with top administration officials but gave no public signal he intends to step down amid unrelenting pressure to resign over a racist photo on his 1984 medical school yearbook page.

Practically all of the state’s Democratic establishment — and Republican leaders, too — turned against the 59-year-old Democrat after the picture surfaced of someone in blackface and another person in a Ku Klux Klan hood and robe.

Northam stayed out of sight early Monday as he met with his Cabinet and senior staff, following a meeting the night before with minority officials in his administration.

The furor erupted on Friday. Northam first admitted he was in the picture without saying which costume he was wearing, and apologized. But a day later, he denied he was in the photo, while also acknowledging he once put on blackface to imitate a pop icon at a dance contest decades ago.

The scandal threatens to cripple Northam’s ability to govern. In another sign Monday of the challenges he could face if he tries to stay in office, Katherine Rowe, president of the College of William & Mary, canceled an appearance by Northam at an event this Friday because his presence would “fundamentally disrupt the sense of campus unity we aspire to.”

Northam, who is one year into his four-year term, has also lost the support of many declared and potential Democratic presidential candidates.

The state’s Republican House speaker said there is “a rightful hesitation” among lawmakers to seek Northam’s impeachment or removal, and they are hoping he steps down instead.

“Obviously on impeachment, that’s a very high standard,” Speaker Kirk Cox said. “And so I think that’s why I think we have called for the resignation. We hope that’s what the governor does. I think that would obviously be less pain for everyone.”

If Northam does resign, Democratic Lt. Gov. Justin Fairfax would become the second African-American governor in the state’s history.

Those weighing in over the weekend included the chairwoman of the Congressional Black Caucus, who said that Northam “still does not understand the seriousness of his actions.”

“I think he’s been completely dishonest and disingenuous,” Rep. Karen Bass, D-California, said on NBC’s “Meet the Press.” ”He knew this picture was there, and he could’ve come clean and talked to African-Americans that he’s close to decades ago.”

Former Virginia Gov. Terry McAuliffe predicted that Northam — who served as McAuliffe’s lieutenant governor — will “do the right thing” and eventually leave office.

One of the few voices backing Northam on Sunday was former Virginia Rep. Jim Moran, a Democrat who served in Congress from 1991 to 2015.

Moran told ABC that Northam’s record — including his support of Medicaid expansion and of public schools in minority neighborhoods — shows that the embattled governor is a friend of African-Americans and that he should ride out the storm.

“I think it is a rush to judgment before we know all of the facts and before we’ve considered all of the consequences,” said Moran, who is white. “I don’t think these public shamings really get us all that much.”

Northam, a pediatric neurologist who came to politics late in life, spent years courting the black community in the run-up to his 2017 race for governor.

He recently came under fire from Republicans who have accused him of backing infanticide after he said he supported a bill loosening restrictions on late-term termination of pregnancy.