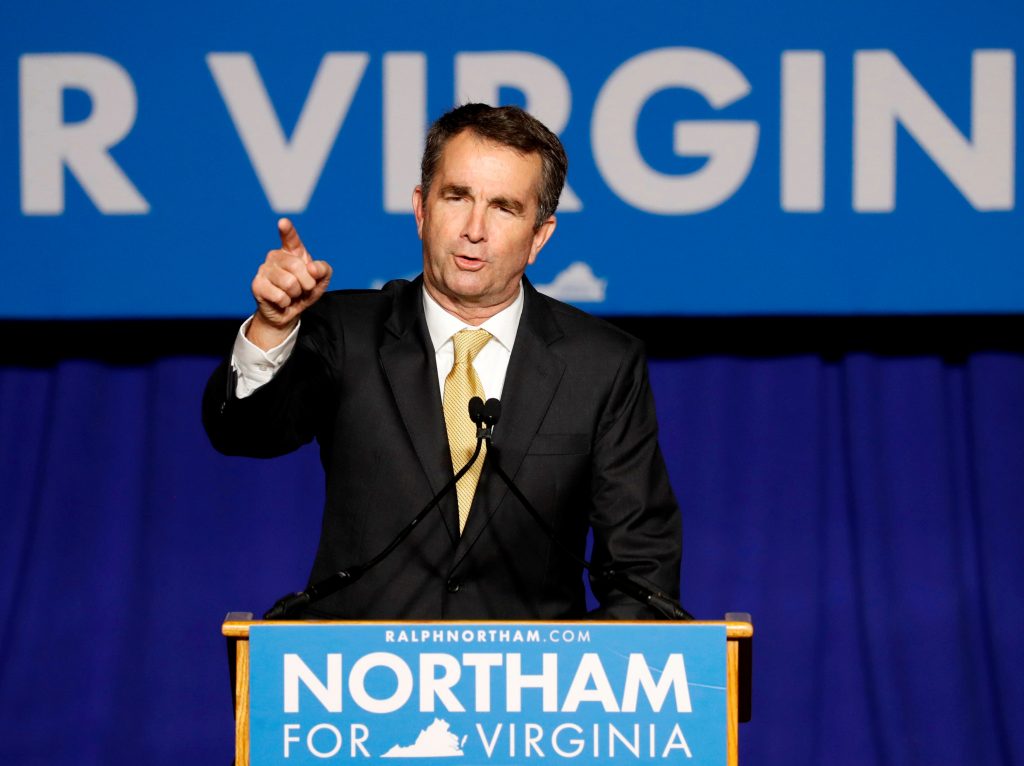 Both of Virginia’s U.S. senators say they have called the state’s governor, Ralph Northam, to tell him that he must resign after a racist photo was discovered on Northam’s page in a 30-year-old medical school yearbook.

Sens. Mark Warner and Tim Kaine are joined by the dean of Virginia’s congressional delegation, Rep. Bobby Scott, in a statement Saturday night that says they have told Northam that they no longer believe he can effectively serve as governor.

Their statement says Northam has served Virginians faithfully for many years but that the events of the last 24 hours “have inflicted immense pain and irrevocably broken the trust Virginians must have in their leaders.”

Nearly every major declared and potential Democratic candidate called for Northam’s resignation after disclosure of the photo, which shows one person in blackface and another hooded in white Klan regalia.

Their reactions came before Northam, 59, who is white, said during a news conference Saturday that he was not in the photo on his page of the 1984 yearbook. He acknowledged using blackface when he dressed as a pop icon for a dance contest, also in 1984.

That leaves Democrats running for president or considering bids to navigate an explosive and embarrassing story as they mount campaigns intended to serve as a contrast with racial divisions that have intensified under the presidency of Donald Trump.

“The candidates were right on this, but this one was easy; the questions and issues on race will only get harder,” said Symone Sanders, one of the Democratic Party’s most visible black strategists and an aide to Bernie Sanders’ 2016 presidential campaign.

Northam’s refusal to step down, Sanders added, threatens to “bring down the Democratic ecosystem” when candidates already face challenges explaining their own records on racially fraught matters. “How do you tell black, brown and young disillusioned voters who didn’t vote in 2016 to come out and take on Donald Trump and take America with this in the party?” she said. “It’s a real concern.”

That means more potential pitfalls for candidates as varied as California Sen. Kamala Harris, the daughter of Indian and Jamaican immigrants, and former Vice President Joe Biden, a white man who prides himself on his working-class heritage.

Harris touts her record as a prosecutor but faces critiques from the left for her role in a system that has for decades disproportionately imprisoned young men of color. Biden, a longtime senator before he was President Barack Obama’s political partner, recently expressed regret for supporting a 1994 crime bill that toughened sentencing laws. He had defended the vote for years.

Antjuan Seawright, a veteran of campaigns in South Carolina, which hosts the first presidential primary with a large black vote, said candidates must explain their pasts and use them — and Northam — to talk about institutional racism. “There’s a larger discussion here about the poisonous effects of racism on the country and how these things really serve a hindrance for all of us moving forward,” he said.

Harris and former Housing and Urban Development Secretary Julian Castro were the first declared candidates to call for Northam to step down. Among the party’s most prominent Latino figures, Castro called the photo “racist and unconscionable.” Harris wrote on Twitter that “the stain of racism should have no place in the halls of government.”

Massachusetts Sen. Elizabeth Warren, who has faced her own troubles over her claims of Native American heritage, followed suit.

New Jersey Sen. Cory Booker, a black man who launched his campaign Friday, the first day of Black History Month, put the incident into historical perspective. “These images arouse centuries of anger, anguish and racist violence,” he wrote on Twitter.

New York Sen. Kirsten Gillibrand, campaigning in the first primary state of New Hampshire, initially stopped short of calling for resignation, telling reporters she’d not seen the picture that she still called “very racist.” She later issued a statement saying she’d seen the image for herself and believed Northam should step down.

“There aren’t two sets of rules for our friends and our foes: Right is right and wrong is wrong … and racism cannot be excused in our government or anywhere else,” she wrote.

Gillibrand helped lead calls for Minnesota Sen. Al Franken to resign after he was accused in 2017 of improper behavior.

Most of the presidential hopefuls sidestepped what would happen should Northam resign: A black man, Lt. Gov. Justin Fairfax, would become the state’s second black chief executive.

The most prominent white men in the potential Democratic field, Biden and Vermont Sen. Bernie Sanders, both waited until Saturday morning to issue resignation calls.

Biden has deep ties in the black community, both from two unsuccessful presidential campaigns but also from two terms as the top lieutenant to the nation’s first black president.

Sanders, who represents a state that is almost 95 percent white and less than 2 percent African-American, has tried to expand his relationships in the black community after his gaps proved a major liability in his 2016 presidential nominating fight against Hillary Clinton. Sanders, who hasn’t said whether he’ll run again, did well in much whiter states, but Clinton dominated him in states where black voters held strong sway, building an early delegate lead Sanders couldn’t reverse.

Seawright, the South Carolina Democrat, dismissed any concerns over comparing candidates’ response times over less than 24 hours. He said Republican leaders had ignored years of racist comments from Iowa Rep. Steve King before finally issuing a condemnation and ousting him from House committees in January after he questioned why “white supremacy” is considered offensive.

“We just can’t be the party of hypocrisy … and direction is more important than immediate timing,” Seawright said.

North Carolina NAACP leader William Barber, a minister who has spoken at Democratic National Conventions, said he is keeping no scorecard on who has called on Northam to step down.

“People calling for his resignation, or Steve King’s for that matter, they have a right to do so,” Barber said. But “to simply have all this discussion about racism when we have some pictures and some words, as ugly and grotesque as they are, but not call out the structural racism that is often presented in more genteel ways — by denying health care, by gerrymandering unconstitutional legislatures, by a prison system that is the new Jim Crow to do that is not to deal with what racism actually is.”