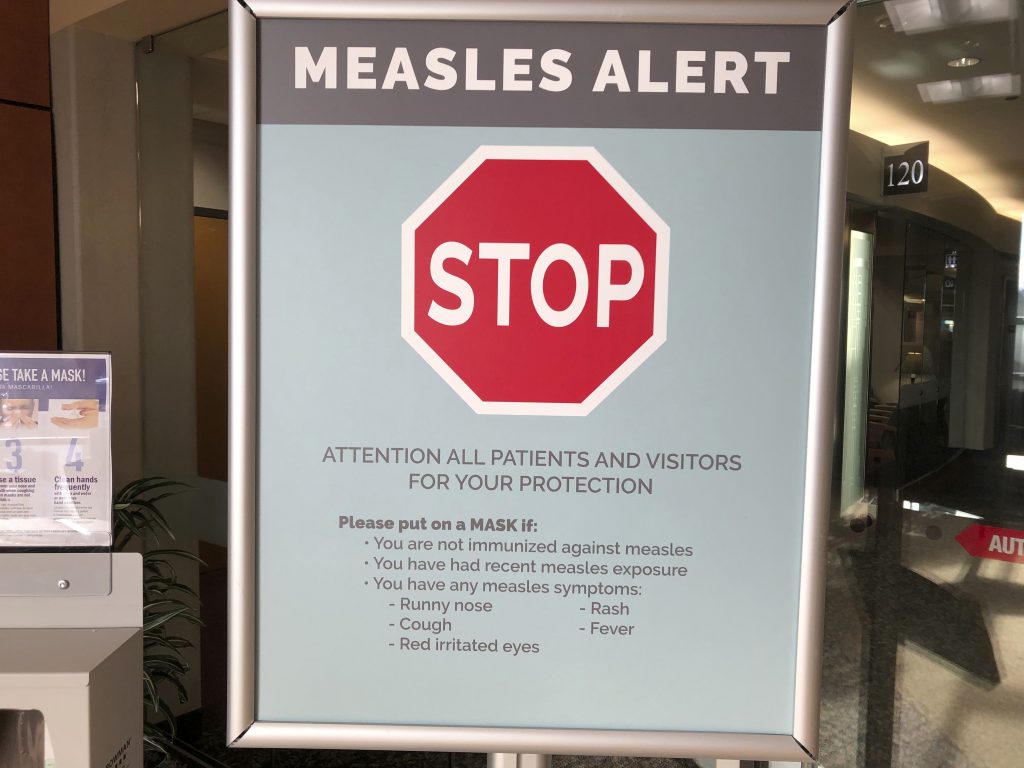 A measles outbreak near Portland, Oregon, has revived a bitter debate over so-called “philosophical” exemptions to childhood vaccinations as public health officials across the Pacific Northwest scramble to limit the fallout.

At least 43 people in Washington and Oregon have fallen ill in recent weeks with the extraordinarily contagious virus, which was eradicated in the U.S. in 2000 as a result of immunization, but arrives periodically with overseas travelers. More than a dozen more cases are suspected, and people who were exposed to the disease traveled to Hawaii and Bend, Oregon, raising the possibility of more diagnoses in the unvaccinated.

Washington Gov. Jay Inslee last week declared a state of emergency because of the outbreak.

“I would hope that this ends soon, but this could go on for weeks, if not months,” said Dr. Alan Melnick, public health director in Clark County, Washington, just north of Portland. The county has had most of the diagnosed cases so far. “This is an exquisitely contagious disease.”

The outbreak has lawmakers in Washington state revisiting non-medical exemptions that allow children to attend school without vaccinations if their parents or guardians express a personal objection. Liberal-leaning Oregon and Washington have some of the nation’s highest statewide vaccine exemption rates, driven in part by low vaccination levels in scattered communities and at some private and alternative schools.

Four percent of Washington secondary-school students have non-medical vaccine exemptions. In Oregon, which has a similar law, 7.5 percent of kindergarteners in 2018 were missing shots for non-medical reasons.

They are among 17 states that allow some type of non-medical exemption for vaccines for “personal, moral or other beliefs,” according to the National Conference of State Legislatures.

A common reason cited by those who don’t want their kids immunized is the belief that vaccines cause autism, though many studies have shown it does not. Those opposed to certain vaccines also object to an outside authority mandating what they put in their children’s bodies, and some have concerns about the combination of the measles vaccine with the mumps and rubella immunizations, which is how it’s routinely given.

A measure introduced last month by Republican Rep. Paul Harris of Vancouver, Washington — the epicenter of the current outbreak — would remove the personal exemption only for the combined measles, mumps and rubella vaccine, commonly called the MMR. It’s scheduled for a public hearing in Olympia on Feb. 8.

Democratic Rep. Monica Stonier of Vancouver, a co-signer on the bill, said she would prefer a more sweeping bill, but “right now we’re looking at what we can get moved.” Previous attempts have failed.

“We’re trying to respond to a very specific concern here and recognize that there may be broader concerns we can consider down the road,” Stonier said.

Oregon has the nation’s highest statewide vaccine-exemption rates, and some communities have rates that are even higher. Washington’s exemption rate, although lower, is also high when compared with other states. Nationwide, the median exemption rate for at least one vaccine for children entering kindergarten in the 2017-2018 year was just over 2 percent.

Oregon state Sen. Elizabeth Steiner Hayward, a Democrat and family physician, dropped an attempt to revoke the state’s non-medical exemption in 2015 after virulent opposition. The Legislature now requires parents to either watch an educational video or talk to a doctor before claiming the exemption.

In Washington state, legislation that would have removed the personal- or philosophical-belief allowance never made it to the House floor for a vote in 2015 amid stiff opposition.

The National Vaccine Information Center, which opposes mandatory vaccination laws, said it opposed that bill and the current one. Another anti-vaccination group, Informed Choice Washington, had its members at the statehouse on Thursday trying to dissuade lawmakers.

“People are feeling extremely oppressed and feeling like they can’t make an educated decision,” said Barbara Loe Fisher, co-founder and president of the group. She said the legislation would “bring a hammer down and threaten people instead of allowing them to make informed decisions.”

California is one of the few states that stripped away personal-belief vaccine exemptions for children in both public and private schools. The law passed in 2015 after a measles outbreak at Disneyland sickened 147 people and spread across the U.S. and into Canada. It occurred despite an earlier law that required parents to talk to a doctor to opt out of vaccines. Vermont also abandoned its personal exemption in 2015.

California state Sen. Richard Pan, a pediatrician who sponsored his state’s bill, said he got death threats over it and had anti-vaccination advocates jam his phone lines and harass him on social media.

The overall vaccination rate for children entering kindergarten in California rose to 95 percent in the two years after the law passed. Parents who don’t want to immunize their children can homeschool or enroll their children in independent study at the local public school.

“The opposition likes to say it’s about parental rights. No, it’s about the rights of other children and the rights of us to go around our community without getting sick,” said Pan, a Democrat.

Measles is still a big problem in other parts of the world, and travelers infected abroad can bring back the virus, causing periodic outbreaks.

Last year, there were 17 outbreaks and about 350 cases in the United States.

Before mass vaccination, 400 to 500 people in the U.S. died of the measles every year. Rare but serious complications include brain swelling that can cause blindness or deafness and pneumonia.

Early symptoms include a fever, runny nose and malaise, followed by a rash that starts around the head and moves down the body. Patients are contagious four days before and four days after getting the rash.

Nine out of 10 unvaccinated people who are exposed will get the disease. Someone who has no immunity can get sick up to three weeks after they have been exposed to the virus.