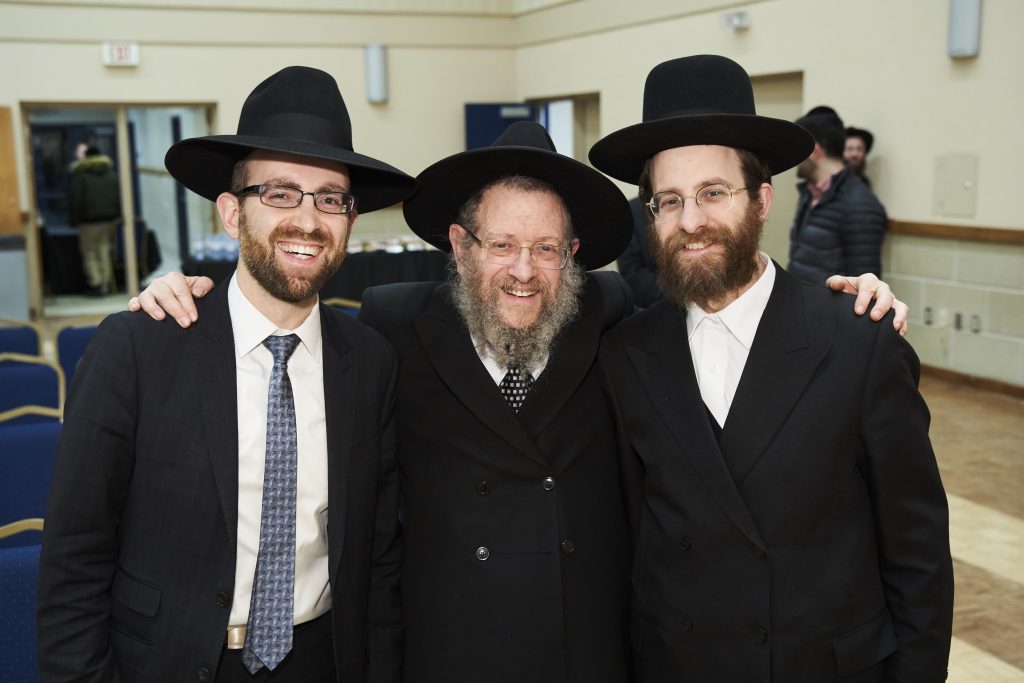 Kesher Yisrael is a newly expanded organization with a goal of empowering the Toronto community to be passionate about Torah life. As part of their programming, Kesher Yisrael has launched a series of parenting presentations with workshops on guiding parents how to be mechanech their children to have a joy in Torah and being a Yid.

This special event was the first in this series, and the Rabbanim spoke on the topic, “Raising Our Children to Love Torah and Mitzvos in Today’s Challenging Environment.”

In a powerful address, Rabbi Adler asserted that we must be mechanech our children to appreciate that we are the Chosen Nation, and that we have a mesorah going back to Yaakov Avinu.

In the early 20th century, many people who came to America from Europe disassociated themselves from the past and sought to begin life anew in the “goldene medinah.” This attitude threatens the existence of Klal Yisrael.

We have to tell our children that they have blood running through their veins that goes back to Yaakov Avinu, and that they have inside of them a chelek Eloka mi’maal. This is the key to our survival. Children must experience the ecstasy of Torah and mitzvos and have to see the excitement of parents involved in mitzvos, not just the excitement of eating kosher pizza and French fries.

Offering some practical advice, Rabbi Adler suggested that when going to buy dalet minin or matzos, parents should take along the children. When returning home, they should dance around the table, full of simchah that they have the zechus to be mekayem this mitzvah. When parents show their excitement for mitzvos, it touches the children profoundly and this feeling will stay with them eternally. This is how we can heal our children from the onslaught of immorality, complacency and lack of enthusiasm.

Rabbi Adler related that when the Steipler Gaon, zt”l, was getting older and could barely walk, some people offered to make a minyan in his home on Simchas Torah. The Steipler agreed on one condition — that no father with young children should come to the minyan. He explained that a child gains the most yiras Shamayim and ahavas haTorah from being in shul on Simchas Torah and watching his father, among all the other men, embracing the Torah with love and passion as he dances around the bimah. In the Steipler’s private minyan, the ruach wouldn’t compare, and he would not risk the future of a child by denying him the opportunity to witness the excitement of Simchas Torah.

Rav Orlowek also spoke on the importance of sending our children the proper messages in regard to our love for Yiddishkeit. Children need to know how to say “yes,” to Torah and mitzvos, and say “no” to those who are doing the wrong thing.

Rav Orlowek insisted that we must never lie to a child, as it is imperative to maintain their trust. He explained that what children want the most is to be respected by their parents, and if we respect them, and show them our love, they will feel that love and then they will be able to extend that love to the Ribbono shel Olam, Torah and mitzvos. The best way to show our children that we love them is through non-verbal messages, such as touch, spending time together, and taking the time to really listen to our children.

Rav Orlowek indicated that we have to assure that we are relaying the proper priorities to our children with our unspoken messages. He told a story of a Rav who was visiting a wealthy man for Shabbos. The man was complaining that he has enough money to support his children in kollel, but they all went into business. Meanwhile, a younger child was running around, and kept turning the lights on and off, and the father remained calm.

However, when the child broke an expensive vase, the father became very angry. The Rav said, “Now you know why your children don’t want to learn in kollel,” as the father was more upset about the broken vase than the chillul Shabbos.

Gashmiyus and physicality have a great draw, as they are quick and taste good without any work. However, ruchniyus has lasting pleasure that tastes much better. We can show our children that mitzvos are a joy, and this will overcome the temptations of gashmiyus. Rav Orlowek ended with a tefillah that all “should be zocheh to harbei nachas amiti.”

Rabbi Leib Irons, director of Kesher Yisrael, was greatly moved by the messages relayed by the Rabbanim and remarked that he received much “unbelievable feedback,” from the event as it was truly unique and impactful for the Toronto community.