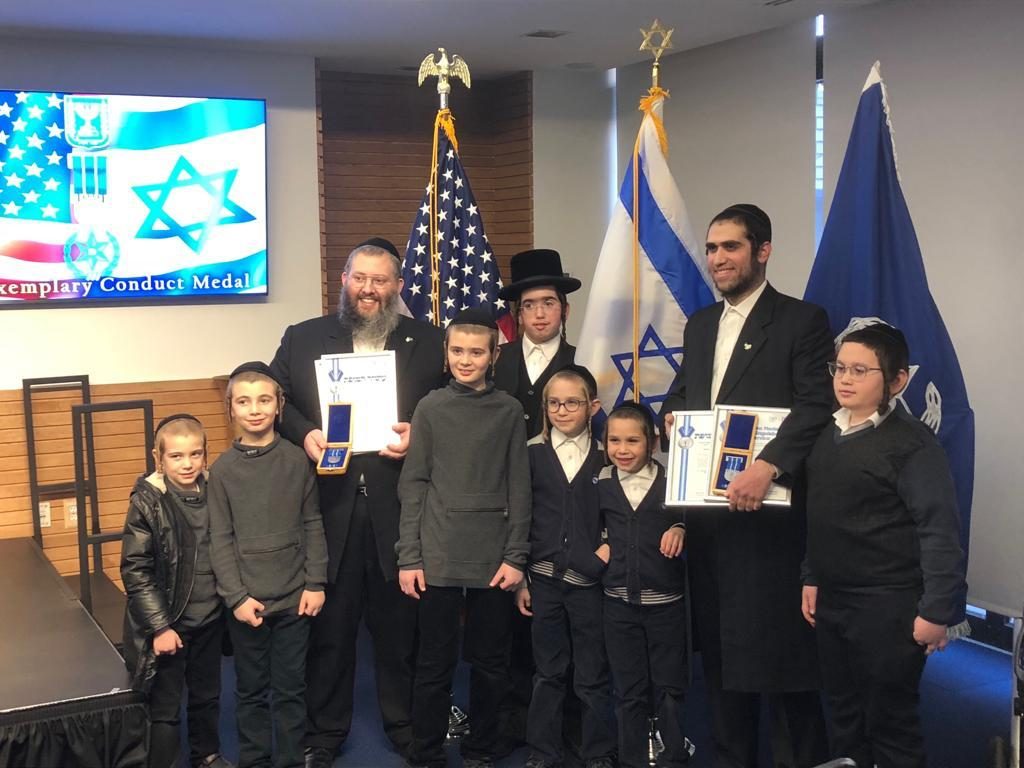 Two Boro Park residents were honored Thursday for heroism in saving the life of an Israeli police officer who was under attack from a stabber.

Mordechai Lichtenstadter and Simche Czin had traveled to Israel for Lag BaOmer 5777. The morning before the festival, on Shabbos, May 30, 2017, they davened Shacharis at the Kosel, then stayed a bit longer to say Tehillim before departing around 1:00 p.m.

“We went home through Shaar Yaffo, through the Armenian Quarter, when we heard a commotion,” Lichtenstadter recalled in an interview Thursday with Hamodia. “We turned around and saw this guy stabbing a police officer.”

As the Druze officer, Naaman Fares, tried to defend himself, he fell backward. The terrorist, a Jordanian, pounced on Fares and stabbed him repeatedly.

That’s when the two Americans sprang into action.

Lichtenstadter jumped in and ripped the terrorist off Fares. “The officer got out, but then the stabber began attacking me,” said Lichtenstadter. “His knife nicked me once on the right hand; it was a light wound. The officer was able to get up, shoot and kill him.”

Czin assisted the wounded officer, using his tallis to stanch the flow of blood.

Fares suffered serious injuries, but the actions of the two Americans saved his life.

“I’m not looking to be famous or anything,” said Lichtenstadter, whose family owns Kineret Florist on 13th Avenue in Boro Park.

Every two years, Israeli police hold a ceremony honoring all officers injured in the line of duty. Before the most recent event, last November, the Israeli National Police Decoration Committee decided to also present the Medal for Civilian Exemplary Conduct to Lichtenstadter and Czin.

But the two Americans were unable to travel to Israel for that event, so the awards were instead presented in a ceremony Thursday at the Israeli embassy in Washington, D.C.

Ambassador Ron Dermer, who presented two citations to each man – one in English, one in Hebrew – said that the incident exemplified the close ties between Israel and the United States.

“We have no greater friend than the United States of America,” said the ambassador. “It’s fitting that the first non-Israeli to ever receive this citation, would [be] two Americans.”

Master Sgt. Fares, who is still recovering from his wounds, spoke via satellite. Lichtenstadter told Hamodia he was also able to speak with Fares privately by phone on Thursday – the first time they’ve spoken since the incident 20 months ago.

In his remarks via satellite, Fares said Lichtenstadter and Czin “were sent by G-d to save my life. From me, my family, and the Druze people of Israel, thank you from the bottom of my heart.”

“You put your life in danger to save mine,” said the officer. “I am hoping to see you soon again.”