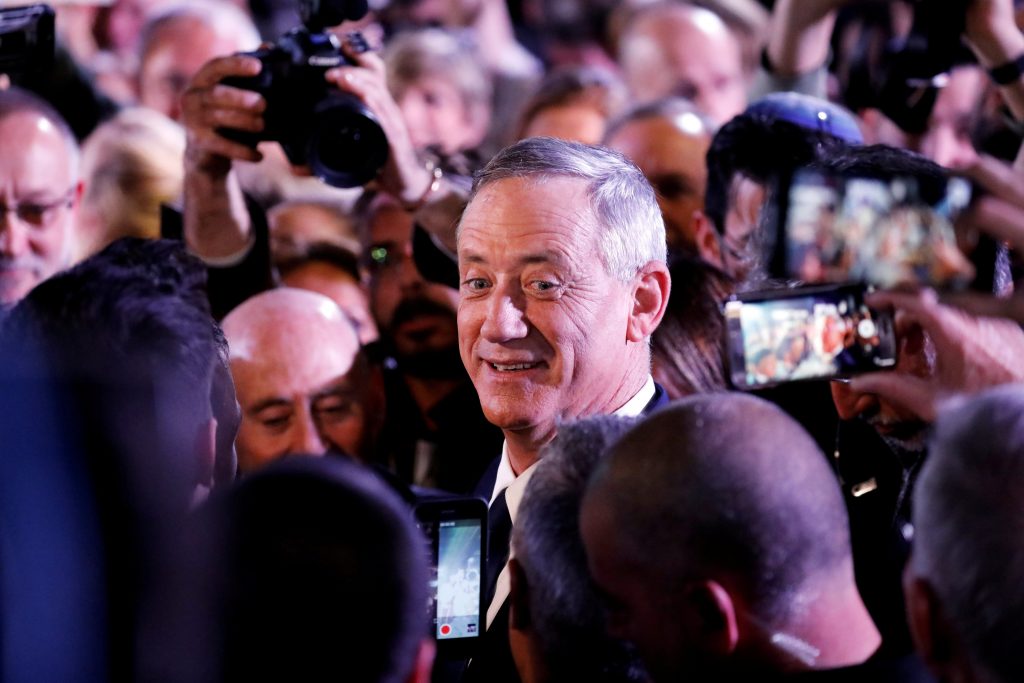 The latest polls on Thursday showed that Benny Gantz was closing in and may have caught up with Israeli Prime Minister Binyamin Netanyahu, and that despite a barrage of criticism, Gantz’s debut speech on Tuesday gave his campaign an impressive jump start.

When asked who is the most suitable candidate to be prime minister, a poll by Reshet Channel 13 News said Gantz matched Netanyahu at 42 percent, the first time this has happened in recent memory. A Keshet Channel 12 poll had Netanyahu with only a slight edge, 36-35 over Gantz. The Israel Public Broadcasting Corporation (IPBC) shows a bigger gap, 47-41.

Netanyahu continued to stick a left-wing label on the former IDF chief, privately telling associates that, if elected, Gantz will form a government with support from Arab MK Ahmad Tibi’s new party, Channels 12 and 13 both reported.

Gantz “doesn’t have an option to form a government without relying on the Joint List and Ta’al,” Netanyahu is quoted as saying, referring to the two Arab Knesset parties running in April.

“Ahmad Tibi has committed to that with his own voice,” he asserted.

“Benny Gantz is a pleasant man,” Gallant, himself former IDF general, said. “There are also good things that Benny Gantz said, and I think that they should be emphasized – for example, security is done in actions and not words – we destroyed 20 tunnels in the south, we began Operation Northern Shield, we captured the Iranian nuclear documents… Those are deeds,” all accomplished under Netanyahu’s Likud-led government.

Gallant further said that “the Likud is the only response to Benny Gantz and to what the Left represents.”

It may be true of his campaign staff, but when Gantz introduced former Defense Minister and former Likud MK Moshe Yaalon as No. 2 on his electoral list at the end of the speech on Tuesday, it belied the left labeling.

Any question about Yaalon’s right-wing credentials was allayed when, on the way out, he was asked by a reporter if he could support a Palestinian state, Yaalon responded, “of course not.” Yaalon’s party reportedly will also occupy the fifth and eighth spots on the list.

Justice Minister Ayelet Shaked tried to dismiss Gantz in similar terms. In an interview on Channel 12 on Thursday she called him a leftist, and “those around him are also of the left,” she said.

When asked if the right should unite, Shaked said that the right “should consider it if the left forms a massive joint party,” as some have suggested. Polls show that if Gantz and Lapid run together, they could unseat Netanyahu.

Shaked belittled the media festival surrounding Gantz. She said that being a politician “is a profession,” and that she “doesn’t like the play-doh parties that you don’t know what their ideology is about,” referring to Gantz’s continued political ambiguity.

Labor party leader Avi Gabbay repeated his call for a center-left alliance to bring down Netanyahu. He urged Gantz and Lapid to explicitly promise they will not join a government headed by Netanyahu after the elections.

“I am happy for new people joining politics and boosting the [center-left] bloc, and it can be boosted even more,” Gabbay told mayors from his party at a conference in Haifa, referring to Gantz.

“But to bring about change, we need to commit to a government change,” he said. “If there is such a commitment, I promise you that on April 9 Netanyahu won’t be prime minister. There will be a new prime minister, a new government, a government of hope.”