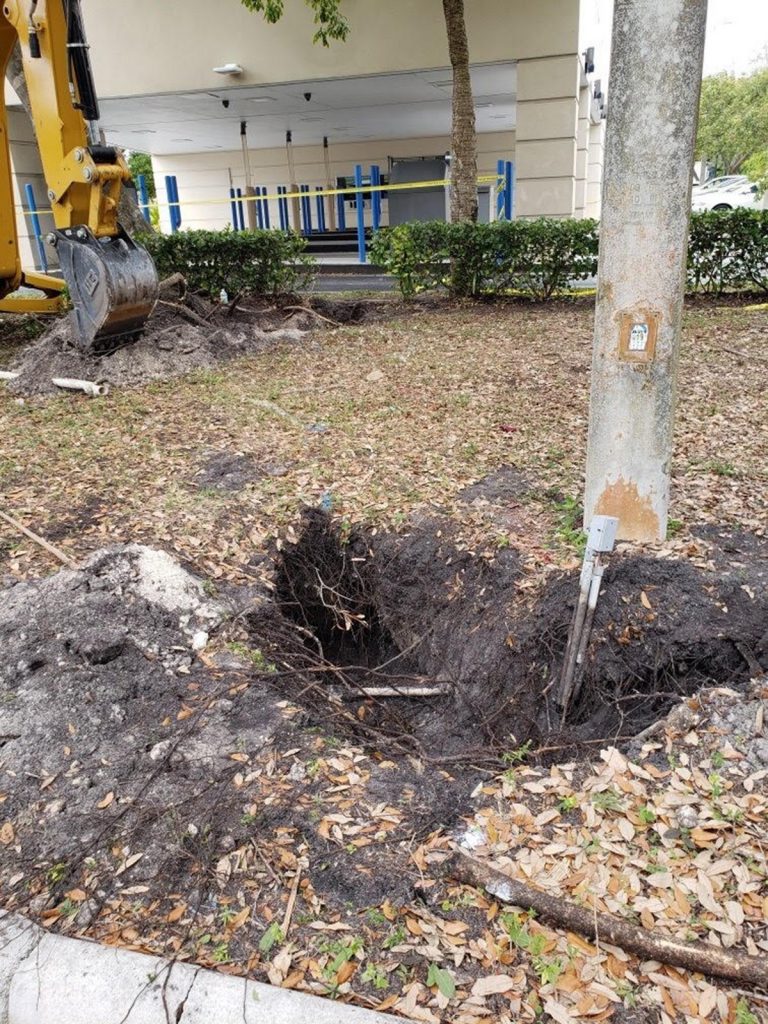 In what sounds like the plot from a bank heist movie, the FBI is on the case of a tunnel that leads to a bank.

On Wednesday, agents swarmed the area to investigate what seems to be an attempt to reach a Chase branch by burrowing underground.

This all unfolded in the middle of South Florida suburbia on a busy weekday, along one of Broward County’s most-traveled intersections.

The clues to what lay underneath started to surface the night before. Someone reported seeing a pothole. The first call went to the Pembroke Pines Public Works Department. What the crew saw was no ordinary pothole.

An orange extension cord was peeking through — the simple kind you might pick up at a grocery or hardware store. That didn’t look right to the work crew.

That’s when they called the cops. The city’s police department also thought the hole looked suspicious. So they called in the feds.

What police and the FBI found at the hole — its entrance covered by a wooden palette at Flamingo Road and Pines Boulevard — was “unique,” said Miami FBI spokesman Michael Leverock.

At the tunnel site, the FBI found a Honda generator, a winch and a wagon above ground near the woods line —indicating that someone was using some sort of rope in the tunnel, Leverock said.

Under the FBI’s supervision, more road crews descended on the site. Using heavy equipment, they tore up a two-lane street leading to the shopping plaza. That allowed investigators to comb through the tunnel.

Seasoned agents marveled at the dimensions.

“I’ve only seen something like this in the movies — and I’m not even sure I’ve seen this because it’s so small,” the FBI’s Leverock said.

How small? Leverock said the tunnel was 2 to 3 feet in diameter and about 50 yards in length. No job for anyone but the slimmest of bank robbers.

“You would have to be really small to get in there and it would be very claustrophobic,” Leverock said. “There’s no way anybody could sit up in there, that’s how small it was.”

But whoever dug through the wooded area to get to the bank wasn’t in a hurry. “They could have been doing this for a month. This was not an overnight thing,” Leverock said.

The FBI is treating the discovery as an attempted bank robbery.

Chase has not commented.

A Palm Beach County Sheriff’s Office K-9 unit was called in Wednesday to pick up the scent of anyone hiding inside. No one was found.

The bank was not breached and no money was stolen, the FBI said.

The FBI’s investigation was ongoing and the bank remained open through the saga.