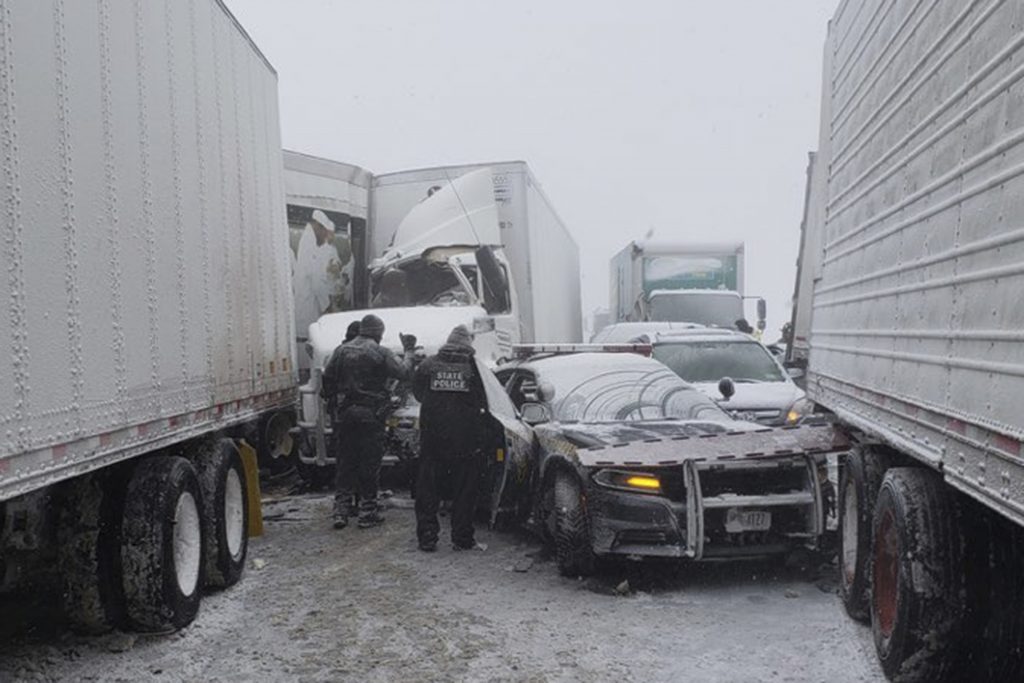 State police will crack down on truckers who violate a travel ban on the western section of the Thruway, New York Gov. Andrew Cuomo vowed Thursday, a day after a tractor-trailer crash near Rochester caused a major pileup that left a trooper with serious injuries.

Violators can be hit with fines up to $450, two points on the license and potential criminal charges, Gov. Cuomo said during a morning news conference at a state transportation facility outside Buffalo.

Tractor trailers and commercial buses are banned from the New York State Thruway from Exit 46 (Rochester I-390) to the Pennsylvania border as well as Interstate 190, Interstate 290, State Route 400, U.S. Route 219 from Peters Road to Interstate 90; State Route 5 from State Route 179 to I-190; and Interstate 81 from the Canadian Border to State Route 104.

On Wednesday afternoon, a truck traveling east on Interstate 90 jackknifed near Batavia, between Rochester and Buffalo. A trooper who had stopped on the highway’s shoulder to assist stranded motorists was injured when the sliding rig hit her patrol vehicle, which was then sideswiped by a second truck. A 19-vehicle pileup ensued.

The injured trooper was treated at a Rochester hospital for numerous injuries but is expected to recover. Two other people were treated and released.

Buffalo and Rochester media outlets reported several instances of truckers ignoring the ban and traveling on highways and roads despite whiteout conditions.

“That tractor-trailer ban is serious.” Cuomo said. “If you violate the law in this situation you could be endangering human life.”

The storm that dumped up to 20 inches of snow on western New York was over by Thursday, giving way to subzero temperatures and dangerously low wind chills. The arctic conditions caused problems from Buffalo to Brooklyn, where about 200 firefighters battling an early morning blaze in a commercial building took turns getting warm on buses amid the frigid conditions.

On Manhattan’s Upper West Side, a water main break shut down a section of Broadway as water gushed from manhole covers and formed icy patches at an intersection. Crews shut off the water and spread road salt on the street as utility workers repaired the break.

In New Jersey, firefighters contended with single-digit temperatures as they fought a blaze in a parking garage at Newark Liberty International Airport. The Port Authority of New York and New Jersey said the fire started on the rooftop of the garage at Terminal C and damaged more than a dozen vehicles. No injuries were reported.