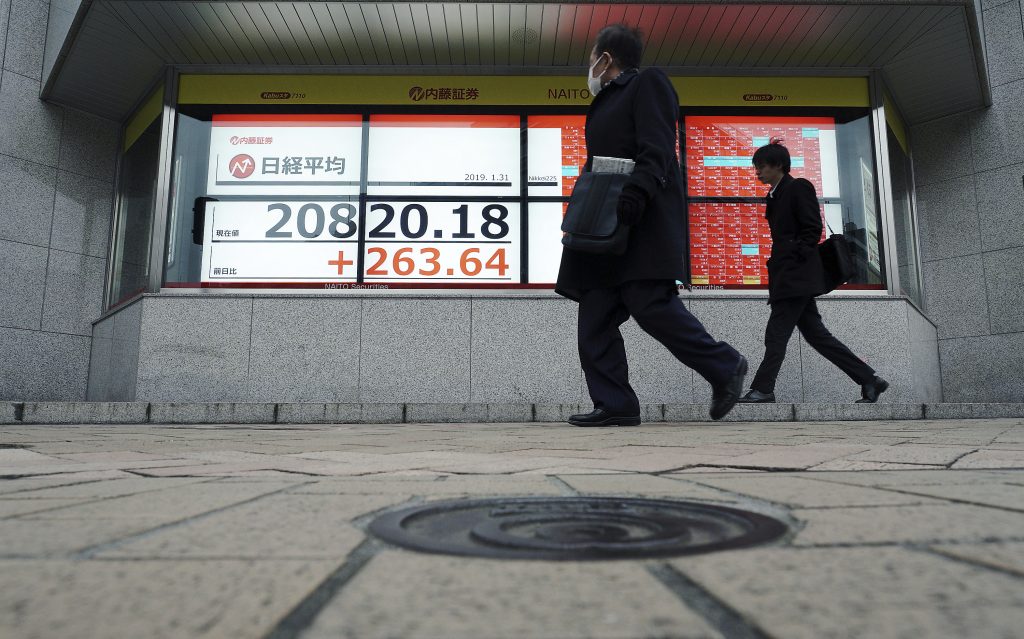 Shares were mostly higher in Asia on Thursday after a survey of Chinese manufacturers showed factory activity improved slightly in December.

Stocks powered higher Wednesday after the Federal Reserve signaled it could hold off on interest rate increases in coming months, citing muted inflation. The benchmark S&P 500 index is now on track to end January with its biggest monthly gain in more than three years. The Dow Jones Industrial Average topped 25,000 points for the first time since early December, gaining 1.8 percent to 25,014.86. The S&P 500 index rose 1.6 percent to 2,681.05. The Nasdaq composite climbed 2.2 percent to 7,183.08 and the Russell 2000 index of smaller companies picked up 1.1 percent, to 1,486.94. The Russell is up more than 10 percent this month.

Trade talks opened Wednesday between the U.S. and China and will loom over the market for the remainder of the week. The high-level talks are aimed at settling a months’ long trade war that has raised fears of slower economic growth. Industrial and technology companies have warned about slowing sales because of the trade impasse.

Samsung Electronics Co. said it posted a near-30 percent drop in operating profit for the last quarter after seeing slowing global demand for its memory chips and smartphones. It still finished the year with record earnings, but Samsung said it expects its overall annual earnings to decline this year because of the sluggish semiconductor market, although it sees its sales of memory chips and organic light-emitting diode panels used in mobile devices rebounding in the second half.

With pressures on the U.S. economy rising — a global slowdown, a trade war with China, a nervous stock market — the Fed signaled it’s in no hurry to resume raising interest rates. And with inflation remaining tame, the rationale to tighten credit has become less compelling. “The situation calls for patience,” Chairman Jerome Powell said at a news conference. “We have the luxury to be patient.”