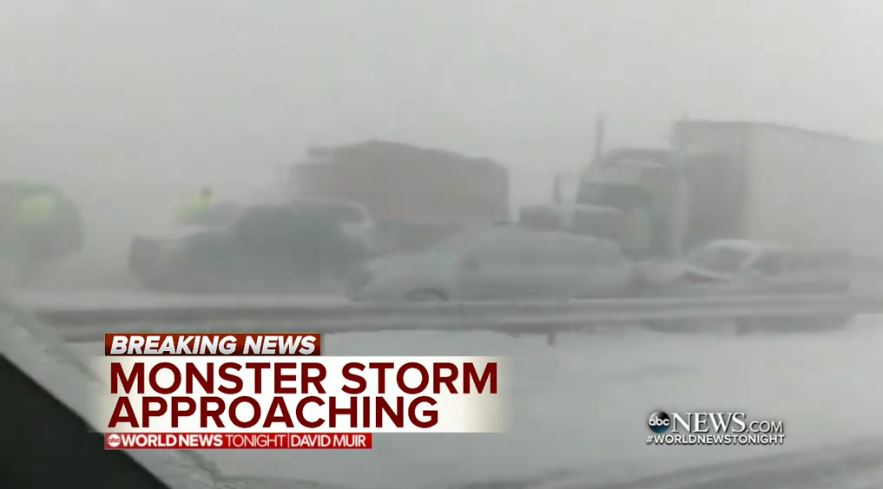 A crash involving more than 20 cars and trucks Wednesday shut down a section of the New York State Thruway in western New York, where blizzard warnings were in place and people were urged to stay inside and out of the wind-driven snow and sub-zero wind chills.

Troopers said some of the vehicles involved in the 2:00 p.m. crash between Buffalo and Rochester were tractor-trailers, even though the trucks had been banned from that part of the thoroughfare because of the storm since Tuesday evening.

A trooper suffered non-life-threatening injuries in the crash, state police said. The number and extent of other injuries wasn’t immediately known.

Earlier Wednesday, Gov. Andrew Cuomo warned that those who defied the ban would be ticketed.

“I anecdotally believe that some tractor-trailer operators are not respecting the ban,” the governor said at a news conference in suburban Buffalo. “They should know we’re going to enforce that ban and the state police will be out in full force.”

Other drivers were glad to comply.

A blast of wind on the highway could “turn you sideways or flip the truck completely over,” trucker Steve Lorber told WKBW in Buffalo.

“Buffalo is a tough city. We’re used to cold weather,” Mayor Byron Brown said during a midday news conference as plows worked to clear the foot of snow that had fallen there since Tuesday. But unless it was necessary to go out, Brown urged, “please stay home.”

Erie County executive Mark Poloncarz issued a state of emergency, along with travel bans in several suburbs as conditions deteriorated through the day.

Blizzard warnings were in effect through 1 a.m. Thursday in Erie, Genesee and Wyoming counties in western New York and Jefferson and Lewis counties in central New York.

Cuomo said plow crews were being sent from downstate to help out.

With up to 2 feet of snow expected by early Friday accompanied by 40 mph wind gusts and dangerous cold, the conditions “should not be taken lightly,” Cuomo said.