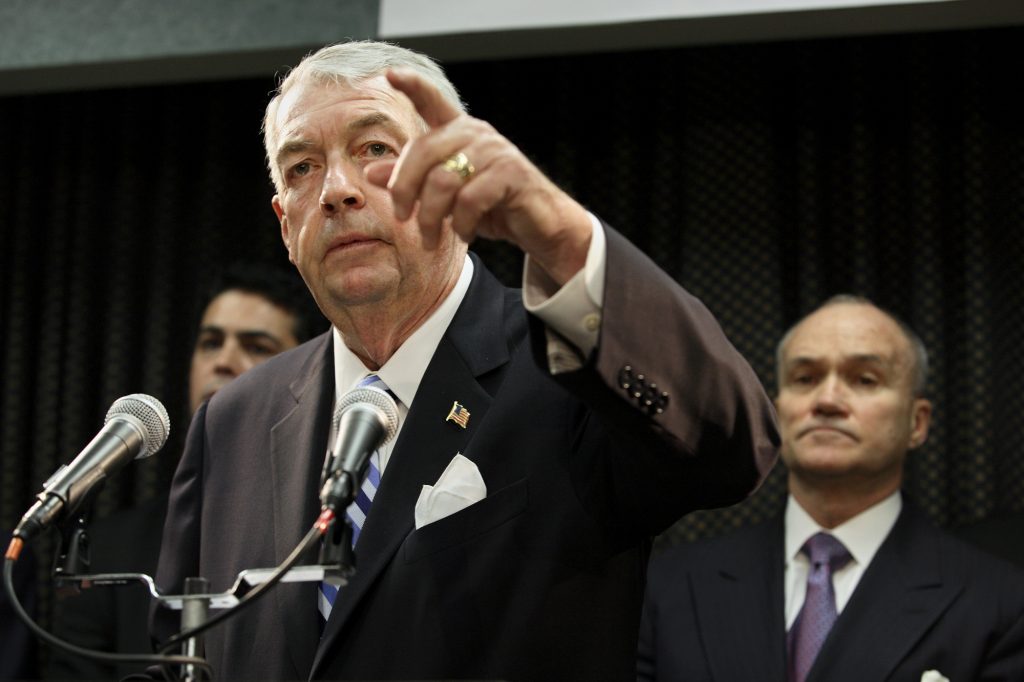 Charles J. Hynes, a former prosecutor who tried to bring order to Brooklyn’s wild streets during an era of racial strife and rampant crime, has died. He was 83.

Hynes, who was the Brooklyn district attorney for 24 years before losing the office in a Democratic primary in 2013, died Tuesday at a hospice in Deerfield Beach, Florida, his son Sean Hynes said Wednesday. He had been in failing health for some time.

Early in his career as a prosecutor, Hynes was a central figure in attempts to wring justice from three of the country’s most notorious episodes of racial violence in the late 1980s and early 1990s, prosecuting men for hate-motivated killings in the Howard Beach section of Queens and the Bensonhurst and Crown Heights sections of Brooklyn.

Later, he was toppled from office by Kenneth Thompson, who argued that under his watch police and prosecutors fighting out-of-control crime took shortcuts that sometimes put innocent people in jail.

A former Legal Aid lawyer who assisted poor defendants, Hynes rose to prominence in 1987, when then-Gov. Mario Cuomo appointed him as special prosecutor in the death of Michael Griffith, a black man who was hit by a car in Howard Beach after being chased onto a highway by white youths. The three main defendants were convicted of manslaughter.

“I realized we were looking at more than a fatal combination of race and violence,” Hynes wrote in a book about the Griffith case. “We were looking at a tragedy. And that tragedy would consume the next year of my life.”

Hynes was elected district attorney in 1989, taking over an office that struggled to stay on top of a bloodbath on the city streets. There were 2,245 homicides citywide in 1990, compared with fewer than 300 last year.

As district attorney, Hynes established a reputation as a reformer, starting pioneering programs to steer defendants to drug treatment and to monitor domestic violence offenders.

But he suffered stinging defeats in prosecutions of two racially charged killings during his first term.

When black teenager Yusuf Hawkins was taunted by bat-wielding white youths and then shot to death in Bensonhurst in August 1989, seven people were charged with murder. Only one man was convicted of the charge, in 1990. The others were convicted of lesser charges or acquitted.

And after black residents of Crown Heights neighborhood rioted in 1991, Hynes’ prosecutors were unable to convict Lemrick Nelson, who had been charged in the stabbing death of Yankel Rosenbaum, Hy”d. Nelson was acquitted of all charges but was later convicted in a federal trial of violating Rosenbaum’s civil rights.

Later in his career, Hynes took on corruption in the legal system. He prosecuted two state judges for taking bribes and sent the powerful boss of Brooklyn’s Democratic Party to jail for forcing candidates for judgeships to hire his political cronies as consultants.

Hynes served until 2013, when he lost his re-election bid to Kenneth Thompson in the Democratic primary. Hynes ran in the general election on the Republican and Conservative lines and lost to again to Thompson, who became the Brooklyn’s first black district attorney. Thompson died of cancer in 2016.

Hynes’ legacy was also tarnished in his later years by accusations that his office had secured wrongful murder convictions.

More than 20 convictions obtained during Hynes’ tenure as district attorney have been overturned through a conviction review process that was revamped after Thompson took over. Critics have accused Hynes of working hand in glove with detectives who coerced witnesses into giving false testimony that sent innocent people to prison.

Hynes denied that his office was complicit in misconduct.

Hynes, who went by Joe, was born and raised in Brooklyn and received both his undergraduate and law degrees from St. John’s University in Queens.

“Mr. Hynes was a lifelong public servant who devoted his life to the borough he loved,” Brooklyn District Attorney Eric Gonzalez, who succeeded Thompson in the post, said in a statement.

Hynes is survived by his wife, Patricia, five children and 17 grandchildren.