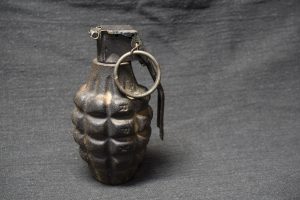 Transportation Security Administration officials said officers found the grenade Wednesday in the bag of a passenger heading to Phoenix.

Officials said the grenade was real but had been rendered incapable of exploding. The man told them that he was on his way to military training.

Spokeswoman Lisa Farbstein told the North Jersey Record that the man wasn’t charged and was allowed to board the flight — without the grenade, which was confiscated.+