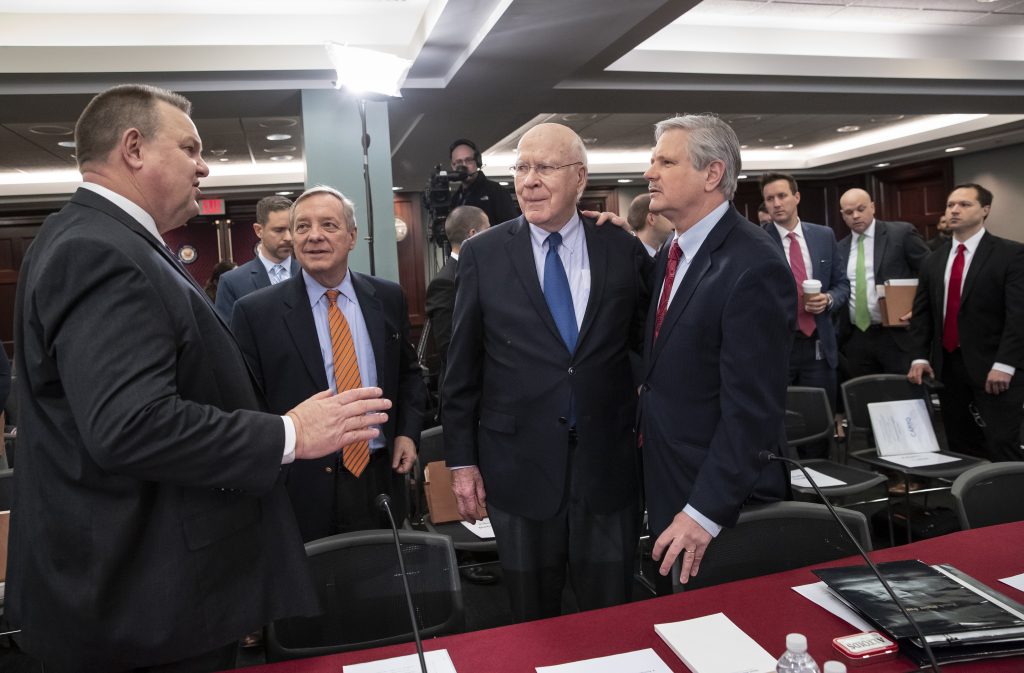 In opening remarks, each party made clear that Trump’s demand for taxpayer financing for his proposed Southwest border wall remained the toughest obstacle to resolve. Underscoring that, Trump tweeted that lawmakers were “Wasting their time!” if they aren’t considering money for a wall.

Trump has demanded $5.7 billion for his proposed wall at the U.S.-Mexico border, but Congress has rejected his plan under opposition from Democrats and the White House stands in a position of weakness in the talks. Lacking the votes to prevail, Trump has begun referring to his proposal as a “physical barrier.”

The comments at once served notice that Democrats weren’t ruling out financing physical structures but would do so only on a limited basis.

Sen. Richard Shelby (R-Ala.), who chairs the Senate Appropriations Committee, said that while Republicans favor improved border security technology, “Smart technology alone does not actually stop anyone from crossing into the U.S. illegally.”

Shelby said physical barriers are needed “not from coast to coast, but strategically placed where traffic is highest.” That echoed recent remarks by Trump as he’s retreated from his more strident comments from the 2016 presidential campaign.

The president surrendered last Friday and agreed to reopen government for three weeks so negotiators can seek a border security deal, but with no commitments for wall funds. If negotiations on the 17-member panel falter, one option would be to enact another temporary funding measure to replace the current one, which expires Feb. 15.

Trump tweeted Wednesday morning, hours before the negotiators were to sit down for their first meeting, that the group of Republicans and Democrats is “Wasting their time!” if they aren’t “discussing or contemplating a Wall or Physical Barrier.”

“He tweets and all you guys do is spend your whole day following up on his tweets,” said House Majority Leader Steny Hoyer (D-Md). “In any event, our answer is the same. We’re in negotiations. These I think are going to be good faith negotiations. And we want to reach an agreement. We want to make sure the government doesn’t shut down again.”

For their part, GOP leaders want to de-escalate the battle over the border wall and suggest they too could be flexible as bargainers seek a bipartisan agreement.

Senate Majority Leader Mitch McConnell (R-Ky.), who pressured Trump last week to end the shutdown, warned the president against triggering another shutdown or declaring a national emergency on the Southwest boundary, a move that could let him redirect budget funds to building segments of the wall.

When asked to describe a border security agreement he’d support, McConnell said, “I’m for whatever works that would prevent the level of dysfunction we’ve seen on full display here the last month and also doesn’t bring about a view on the president’s part that he needs to declare a national emergency.”

But prospects for broadening the scope of the talks to include broader immigration issues such as providing protection against deportation to “Dreamer” immigrants brought illegally to the country as children — or even must-do legislation to increase the government’s borrowing cap — appeared to be fading.

The longest shutdown ever was initiated by Trump after Democrats refused his demand for $5.7 billion to build segments of his border wall. Polls show people chiefly blame Trump and Republicans for the shutdown and widely dislike the wall.

Trump has retreated increasingly from the word “wall” as it became apparent that he lacked the votes in Congress to win taxpayer financing for the full project, which he initially said would be financed by Mexico.

Democrats have repeatedly said they wouldn’t finance the wall, which House Speaker Nancy Pelosi (D-Calif.) has called “immoral.” In recent weeks, they’ve expressed support for fencing or physical barriers but have left ambiguous exactly what they would back. They’ve said they want to spend money on more border patrol agents and technology like scanning devices and drones.

McConnell and many GOP lawmakers have long sought to avoid government shutdowns, aware of the tactic’s long and consistent history of backfiring badly on whoever sparks one. In the one that just ended, 800,000 federal workers went unpaid for five weeks, countless Americans were denied federal services and mushrooming problems included slowed air travel and delayed IRS refunds.

Members of both parties have opposed Trump declaring an emergency on the Mexican border. They say it would set a dangerous precedent for future presidents who might use the strategy to push agendas that stall in Congress. If Trump issued the declaration, it would trigger near-immediate lawsuits that might block the money anyway.