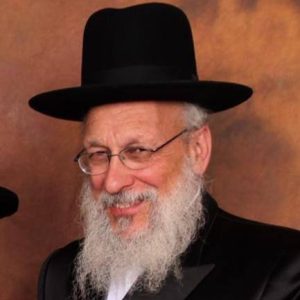 Rav Yidel was known for his selfless dedication to the yeshivah, where no task was too big or too small for him to undertake and to complete with devotion. Whether it involved maintaining the grounds or making sure the Rebbeim and talmidim had all they needed to have a positive day, Reb Yidel was there to ensure that they would be successful.

Yeshiva Bais Dovid has been mechanech several doros of talmidim in the Monsey/Spring Valley area. Throughout the years, the tripartite hanhalah consisted of Harav Mottel Waldman, zt”l, Harav Shaya Dovid Bayer, zt”l, and Harav Yidel Lichter, who together established one of the premier mosdos of chinuch in the Metropolitan area. They were respectfully referred to as the “am segulah” because they form a “segol” of three points to allow the yeshivah to function at maximum capacity. At the levayah of Rav Bayer, Rav Lichter bemoaned that of the three, he remained a lone “pinteleh,” the sole survivor of the original three pillars of the yeshivah.

His commitment to the welfare of the yeshivah and its talmidim was never-ending; he was alert to every aspect of his job. “His attitude towards the needs of the yeshivah included every detail,” said Harav Reuven Jacobs, Menahel of Yeshiva Bais Dovid. “To Rav Yidel, there was no difference in his attention and responsibility whether it meant raising a million dollars to cover the payroll and the budget, or seeing to it that a yingele had the proper seat for his Tehillim group.”

Rabbi Dovid Pilchick, administrator of the yeshivah, spoke to Hamodia about the ehrlichkeit of Rav Yidel. “In all the years I knew him, I never heard him speak negatively about anyone. He was my Rebbi in this aspect, as he showed me how to deal with people. A parent told me recently how he once went through a difficult time financially, and Rav Lichter showed such compassion for his predicament. Today, when his situation is improved, he sends any extra funds to the yeshivah in appreciation for the way Rav Yidel dealt with him.

“I visited him when he was in the hospital, and although he was quite ill, whenever anyone associated to the yeshivah came in, he would ask, ‘What’s happening in the yeshivah?’ When he was recovering from his first surgery, he immediately called the secretary and asked, ‘Where are we holding with the accounts?’ His dedication was amazing.”

Rav Lichter did not view his employment as a difficult job, but rather as a means to build another dor of bnei Torah. At times, when the pressure of his position would become demanding, Rav Yidel would peek through the door or window of a classroom and watch the children learning Torah, which would give him the vitality and energy to continue in his avodas hakodesh.

Despite his demanding schedule, Rav Lichter was known as a person who never slowed down and never took breaks, but was constantly involved either in learning or doing for the klal.

When he got married, he declined an offer from his in-laws to purchase a sofa for his home, since in his mind there was no need for a piece of furniture upon which to relax and waste time. Although many years later he did buy a used couch for his family, until he took ill they never saw him rest on it, as he was always busy trying to accomplish in life by adding to his own avodas Hashem or by doing for others.

For himself, he never sought anything more than was absolutely necessary to sustain himself. “He always drove a secondhand car,” said Rabbi Pilchick, “and when he obtained a new car in his later years, he complained that ‘it’s not for me, I feel so out of place in it.’ Yet when I purchased a new car, he was so happy for me, and went out of his way to show me that he fargined me.”

In addition to his service in Yeshiva Bais Dovid, Rav Yidel was one of the pillars of Khal Birchas Nachal-Breslov in Monsey.

Rav Lichter was a Breslover Chassid for many decades, and would travel behind the Iron Curtain to visit the tziyun of Rav Nachman, zy” a, while it was still under Communist rule and fraught with danger, decades before it became popular to do so. In the Breslover beis medrash, too, no job was beneath his dignity, whether it involved removing the garbage when needed or serving as gabbai, which he did for many years. He took responsibility for any bachur who wandered in to the shul, arranging a place for him to stay, a place to eat, a time to learn with him as a chavrusa, or whatever was needed.

Yet, despite his lofty activities, he was the epitome of humility, often saying, “Loz up mit der Reb, ich heis Yidel — Do not call me Reb; my name is plain Yidel.” A family member declared, “It’s not like he worked on being mevatel [nullifying] himself; he truly felt there was nothing of [importance] within him that needed bitul [nullification].”

At the levayah, which was held in Yeshiva Bais Dovid and in Khal Birchas Nachal-Breslov, the maspidim spoke of his tremendous level of avodas Hashem. Harav Sender Goldring, a Rebbi in Yeshiva Bais Dovid and a mispallel in Breslov, said that when he visited him when he was ill in the later years and asked him, “Vos macht ihr?” Rav Yidel would answer, “Ich mach teshuvah.”

Rabbi Goldring told Hamodia that it was hard to believe the amount of work Rav Yidel was doing. “When he was working for Yeshiva Bais Dovid, it was obvious that he was completely involved in the yeshivah, and could not have any time for anything else. Yet in the shtiebel, he was the mainstay of the kehillah. He literally raised the funds to build the shtiebel when the Monsey’s frum community was in its infancy. He went door to door collecting funds, and today the shtiebel is flourishing. This was his pride and nachas, as well as his accomplishments in the yeshivah.”

As part of his devotion to Breslov, he raised funds each Purim for kimcha d’Pischa, and sent the funds to the leaders of Breslov in Eretz Yisrael, who always held him in the highest esteem. Yet when it came to his own expenses, he turned down offers for help. “When he was making a wedding for a child and I gave him funds to assist in the massive expenses, he declined, saying there were other who needed it and he would manage on his own.”

Reb Moshe Reichman, a son-in-law, mentioned that his father-in-law was very meticulous about learning Chumash with Rashi each week. “When I would spend time at my shver’s bedside,” Reb Moshe said, “I would learn Chumash with Rashi aloud. At times, I inadvertently skipped a word, and he would often surprise me as he whispered the word that I skipped.”.

Similarly, visitors who would learn Mishnayos or from sifrei Breslov in his presence reported that would finish the words of the Mishnah or sefer that was being read.

Despite the suffering he endured during his illness, he never complained about it. One of the maspidim quoted a vort from Harav Yaakov Meyer Schechter, shlita, who explained the words of the Gemara in Shabbos (153a) as follows.

The Gemara tells us that from the hesped of a person one can recognize if he is a ben olam haba, one who will merit olam haba. Rav Yaakov Meyer explained it to mean that if we examine what a person bemoans, what gives him enough heartache that it makes him cry out in sorrow, we can see if he is worthy of olam haba. A person who complains about the lack of mundane matters will not necessarily merit reward in the world to come, but a person who is in pain from his distance from Hashem is surely worthy of olam haba.

“Rav Yidel was a person who only expressed a krechtz about his kirvas Elokim, his closeness to Hashem.”