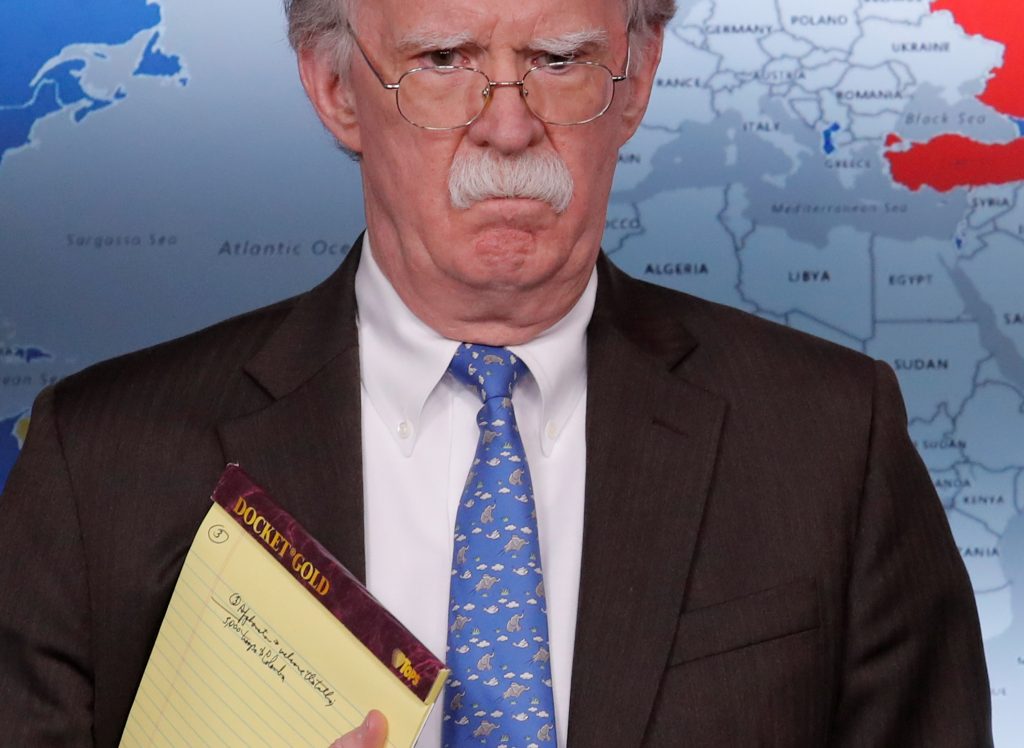 “We request these preventive measures against Guaido while we compile elements to stop the events that since January 22 have broken the peace of the Republic,” the prosecutor, Tarek Saab, said in a news conference.

Speaking at the opposition-led National Assembly, which he heads, Guaido responded to the move by dismissing it as “nothing new under the sun.” He said it came from “a regime that doesn’t give answers to Venezuelans” and whose “only answer is persecution and repression.” Guaido added: “The world is clear on what’s happening in Venezuela… Let’s not desist because of threats and persecution. We will continue to advance in our fight.”

The chief prosecutor’s request came after the United States escalated its efforts to unseat leftist President Nicolas Maduro on Monday by punishing the state oil company, Petroleos de Venezuela (PDVSA), in an effort to transfer control over it to the opposition. The U.S. move freezes $7 billion in U.S.-based assets and blocks more than $11 billion in revenue that Venezuela would get from oil sales next year through its U.S.-based company Citgo, which owns three refineries in the United States and employs thousands of workers.

“Today’s designation of PDVSA will help prevent further diverting of Venezuela’s assets by Maduro and preserve these assets for the people of Venezuela,” Treasury Secretary Steven Mnuchin said in a statement Monday. The Treasury Department said money would go to a fund that a transitional government headed by Guaido would eventually have access to.

Revenue from oil sales to the United States and from Citgo, which imports Venezuela’s heavy crude oil, refines it and distributes gasoline throughout the United States, is one of the Maduro administration’s main sources of income. These oil sanctions, experts say, constitute the biggest blow that the populist Maduro, who rose to power in 2013 after leftist firebrand Hugo Chávez died and named him his successor, has ever confronted.

“Venezuelan heavy oil is not easy to place. These sanctions leave the government with a tiny maneuvering margin,” said Henkel Garcia, head of local consulting firm Econometrica. “This is not just a big blow to Maduro but also to the Venezuelan people. It will hit the population hard in the short term with scarcity of food and medicines and even of gasoline.”

The sanctions come during a tense week in Venezuela. Overnight protests are surging and are being met with harsh repression. At least 35 people have been killed and more than 800 detained in a week. More protest marches are scheduled this week.

Many Venezuelans are desperate for change as they confront crippling hyperinflation and scarcity of vital medicines, but many worry that U.S. sanctions could make the dramatic situation worse in the short term.

At a supermarket in central Caracas on Tuesday, people were making nervous purchases amid predictions that food would become scarcer after the sanctions.

Amaury Caraballo, 62, a businessman, said he has been trying to buy more food but that prices are too high to accumulate much.

“I support the sanctions because it’s the only way to pressure the regime,” he said. “Everyone in the country is struggling to find food and medicines already. I’m definitely worried the sanctions will harden the situation for us, and I’m getting prepared for it, but I think it will be a good thing in the long term.”

A 63-year-old textile businessman, Jacobo Benzaken, said the sanctions would hit the people harder than they would hit the government.

“We will have no gasoline, no money, nothing,” he said. “I’m scared of not having transportation, food. Everything is scary. If we’re not doing well now, imagine what comes next…”

Freddy Guevara, an opposition leader who has taken refuge inside the Chilean Embassy, tweeted: “Yesterday President Guaido achieved the protection of the republic’s accounts abroad to avoid further robbing. Today the usurpers respond by freezing his checking account with which he recharges his phone balance. We’re doing well Venezuela. (hash)assymetricwar”

Separately, the State Department on Tuesday issued a new travel advisory for Venezuela, raising it to “Level 4 – Do Not Travel.” The advisory cited “crime, civil unrest, poor health infrastructure, and arbitrary arrest and detention of U.S. citizens.” In its travel advisory dated Jan. 24, the department ordered “the departure of non-emergency U.S. government employees and family members due to ongoing political instability.”

Bolton has maintained that all options remain on the table when it comes to Venezuela, prompting questions about whether the top White House official showed off the notepad purposely as a warning and a show of mettle.

Acting defense secretary Patrick Shanahan said Tuesday he has not spoken with Bolton about the possibility of deploying 5,000 troops to the U.S.-allied nation along Venezuela’s western border. He declined to comment on whether he had spoken to anyone else in the administration about the possible involvement of American troops in the crisis.

“We are supporting, we are monitoring the situation very carefully, and we’re watching,” Shanahan said. “We are working very much in real time.”

Shanahan said the National Security Council, under Bolton’s leadership, has “created a number of options” with regard to Venezuela.

“We support them with their policy development, and as the situation in Venezuela evolves, we are there to give them advice and counsel and support,” he said.

In a televised meeting with diplomats on Monday, Maduro fired back at the United States.

“John Bolton announced a series of immoral and illegal unilateral and criminal measures,” he said. “With this measure they want to rob our company Citgo. Be alert, Venezuela.” He added that the state oil company would take “legal and political actions” shortly.