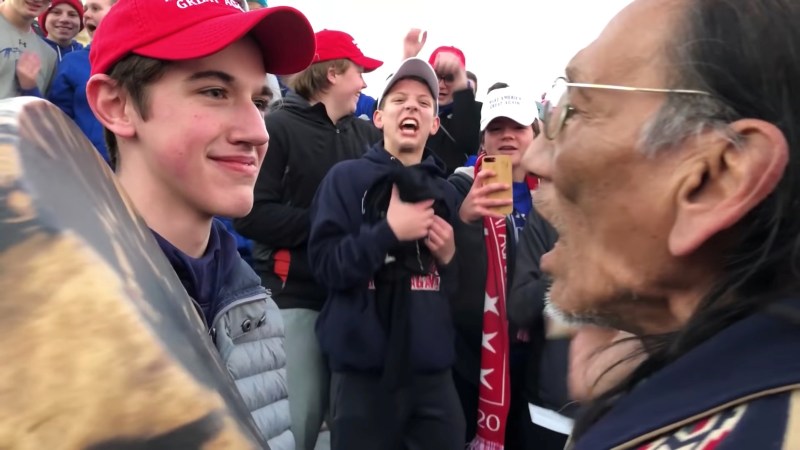 Whiplash was a distinct risk for anyone trying to follow the story — or, perhaps, non-story — of the faceoff the week before last between Kentuckian high-schooler Nick Sandmann and a 64-year old Native American, Nathan Phillips, at the Lincoln Memorial in Washington, D.C. Each was in town for a rally: Mr. Sandmann, a “Pro-Life” gathering; Mr. Phillips, an “Indigenous Peoples March.”

A short video of the younger man silently smiling at the older one as the Native American chanted and banged on a drum was offered to the public, with the smile characterized, and harshly criticized, as a disrespectful smirk.

Then a longer video emerged, indicating that the smile was benign, and that the two principals were not in conflict.

Or that they were even principals at all, as it became evident that both of the men were reacting to, and at least one of them being crudely insulted by, a group of “Hebrew Israelites.”

Those are black racists dressed in colorful caps and robes adorned with Jewish symbols who try to achieve a sense of self-worth by pretending that they are the “real Jews,” and white people “Edom.” They often appear with display boards inscribed with the English renditions of the names of the shevatim; they imagine that each of various African or Caribbean populations stems from a particular shevet.

Native Americans are assigned the designation of “Dan” by the befuddled members of the racist group, and members of the group, the later video showed, were rudely berating the high-school boys, perhaps because some were wearing “Make American Great Again” caps. The “Hebrew Israelites” also tried to enlist Mr. Phillips, a member in their fantasy of the “tribe of Dan,” in their verbal attack on the boys and, at one point, berated him too.

Even after longer depictions of the interaction were available, the debate among partisan players continued, with some trying to sully the boys’ and their religious school’s reputations, and others gleefully attacking the many media that fell hard for the first, incomplete, narrative.

What emerges from the fracas is something that has been increasingly evident in recent years: Truth is elusive.

The kernel of the problem is that facts are mediated by people, and people are subject to biases.

Reports tinged (or, at times, saturated) with writers’ prejudices have been colorfully labeled “fake news” by the president; for their part, fact-checkers have catalogued some of his own contentions that aren’t true over the past two years. It’s hard to know what can be believed and what cannot.

That’s always been the case, of course, but it’s getting worse. Much worse. Incomplete videos are one thing. Deepfakes, quite another.

If you don’t recognize that word, you’re not alone. It’s been around for a while but only entered the larger populace’s lexicon in the past year or two. Deepfakes are videos made with the use of special software that make it seem that an identifiable person is saying or doing something he has not said or done. Sort of Photoshop for video on steroids.

The software, which is readily available and being constantly refined, superimposes existing recordings and images onto others, creating a realistic but entirely unreal action, speech or expression. The technology can be used to alter the words or gestures of a politician or other public figure, yielding the very fakest of fake news.

Last year, a doctored image circulated by gun-rights activists and Russian discord-sowers purported to show a Parkland high school shooting survivor and gun-control advocate ripping up a copy of the Constitution. What she had actually torn up was a bulls-eye poster from a gun range.

And Myanmar’s military is believed to have used deepfakes to ignite a wave of killings in that country.

Legislators have taken note. Senator Marco Rubio, a member of the Senate Intelligence Committee, warned that “America’s enemies are already using fake images to sow discontent and divide us. Now imagine the power of a video that appears to show stolen ballots, salacious comments from a political leader, or innocent civilians killed in conflict abroad.”

Technology expert Peter Singer predicted that deepfakes will “definitely be weaponized,” whether it is for “poisoning domestic politics” or by hostile nation-state actors to gain an edge on the battlefield.

The 24-hour news cycle and expansion of social media platforms only compound the problem. “A lie,” as the saying goes, “can travel halfway around the world while the truth is still putting on its shoes.”

Chazal teach that, when the “footsteps” of Moshiach are close, ha’emes tehei ne’ederes, “truth will go missing” (Sotah 49b).

Seems there’s cause for optimism.