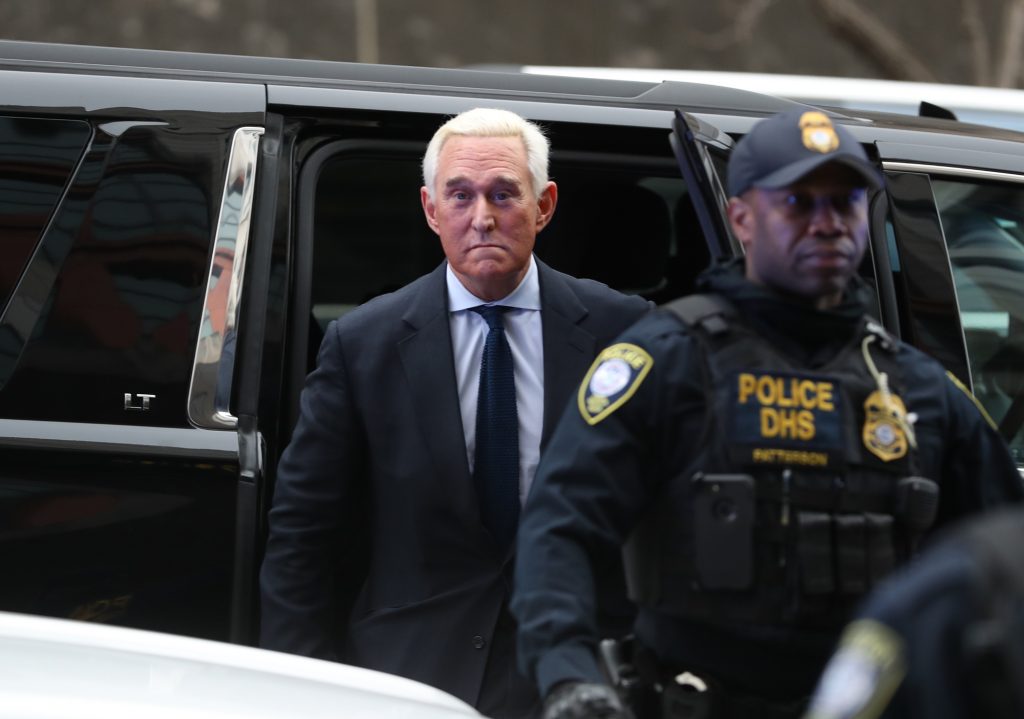 Stone’s lawyer, Robert Buschel, entered the plea. The normally talkative Stone said little during the arraignment except “yes, your honor” to acknowledge instructions from the judge. Another hearing is scheduled for Friday.

Prosecutors have accused Stone, 66, of lying to Congress about his conversations involving WikiLeaks and hacked Democratic Party emails, and they said he tried to persuade another witness to provide false testimony.

Stone was arrested early Friday at his home in Fort Lauderdale, Fla., and later released on a $250,000 bond. He has denied breaking any laws and accused Mueller of conducting a political prosecution.

A Republican operative who has spent decades embracing his reputation as a dirty trickster, Stone has given multiple interviews since his arrest criticizing the Russia investigation and the pre-dawn police raid on his home.

On Monday, he complained to reporters that law enforcement decided to “storm my house” and “terrorize my wife and my dogs.”

Stone has repeatedly vowed not to “bear false witness” against President Trump, but he didn’t close the door on cooperating with Mueller’s office in some way.

“I have to determine after my attorneys have some discussion,” he said. “if there’s wrongdoing by other people in the campaign that I know about, which I know of none, but if there is, I would certainly testify honestly.”

Stone was charged with one count of obstruction of an official proceeding, five counts of false statements and one count of witness tampering.

According to the 24-page indictment, a Trump official reached out to Stone during the campaign to learn WikiLeaks’ plans for releasing thousands of hacked emails from the Democratic Party and Hillary Clinton’s campaign.

At one point, the indictment said, he told a supporter that “the payload is still coming”, days before WikiLeaks began releasing emails stolen from the account of John Podesta, Clinton’s campaign chairman.

Stone lied about those conversations when he testified to the House Intelligence Committee, the indictment charged.

“I’m not going to talk about hypotheticals that are just ridiculous,” she said.

Sanders also said, “The president did nothing wrong throughout this process.”

“The further we get into the process, the more and more we see this has nothing to do with President Trump,” she said.