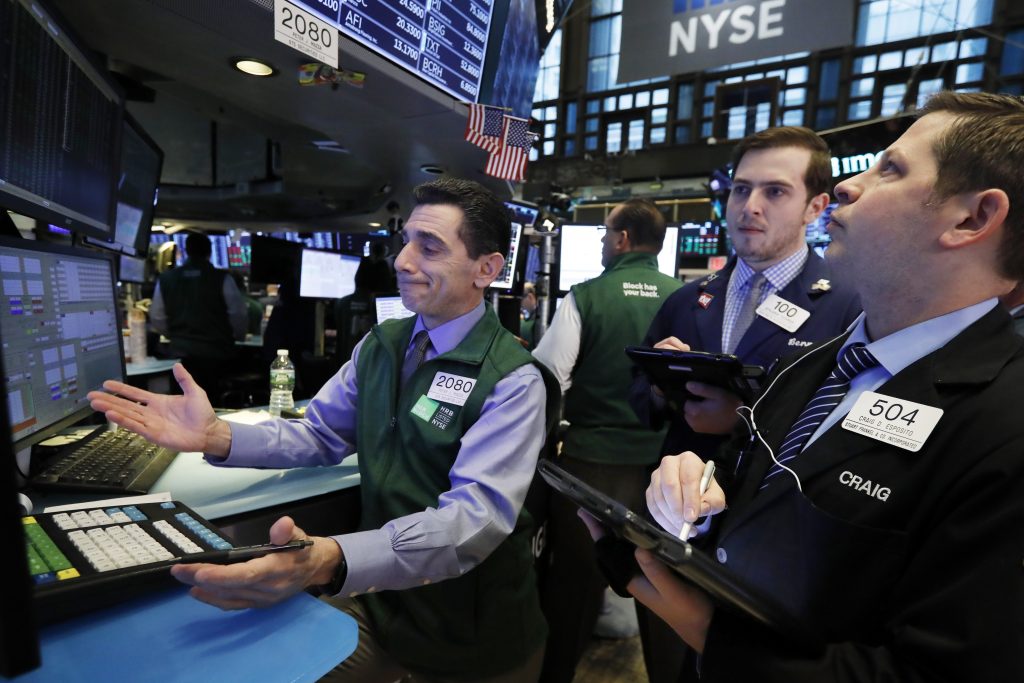 Early gains for stocks faded by Tuesday afternoon as investors assessed a mixed bag of corporate results and looked ahead to a heavy schedule of news on companies and the economy.

Xerox and 3M rose after reporting solid results, but Harley-Davidson fell. Apple reports its results after the close of trading.

Washington will continue trade talks with Beijing this week, and British lawmakers resume debate on the country’s looming departure from the European Union in March. Currently there is no deal in place to ensure smooth trade between Britain and the rest of Europe after Britain leaves the bloc.

In the U.S., the Federal Reserve ends its latest interest rate policy meeting on Wednesday and the government releases its monthly employment report, the most important indicator on the U.S. economy, on Friday.

The jobs report will have even more importance than usual because many other reports on the economy have been delayed because of the five-week partial shutdown of the federal government that ended Friday.

ANALYSIS: “We’re still pretty much in a tight race today,” said John Lynch, chief investment strategist for LPL Financial. “We think earnings are good and economic growth is good; it’s just not great like it was last year.”

PHARMA: Pfizer rose after the world’s largest drug-maker reported mixed results. While hefty costs for layoffs and acquisitions sunk fourth-quarter profit, the results still topped Wall Street forecasts. The company has been struggling to upgrade sterile injectable drug factories it bought from Hospira, but repairs have dragged on and production shutdowns have cut into sales.

The company also gave Wall Street a weak sales and profit outlook for the year, but the company is still coming off of a good year, getting four new cancer drugs that could be blockbusters approved in the last 14 weeks of 2018. The stock rose 2.5 percent to $40.51.

WINNERS: Nucor, the biggest U.S. steelmaker, said profit surged 68.5 percent during the quarter thanks in large part to a growing economy. The company also saw increased steel shipments and prices. The stock rose 3.8 percent to $60.75.

Xerox rose on better-than-expected fourth-quarter results and an upbeat forecast as it restructures its operations. Xerox rose 9.9 percent to $26.71.

3M rose 2.2 percent to $197.44, and also rose on upbeat fourth-quarter results and a positive forecast.

STUCK HOG: Harley-Davidson fell after the motorcycle maker reported a drop in sales worldwide, led by a weak showing in the U.S. Shipments worldwide fell 7.9 percent. The company, which has been struggling to boost sales domestically, has been increasingly looking to sell more bikes overseas. It has warned that the ongoing trade dispute with China would raise costs. Harley’s stock, ticker symbol “HOG,” fell 7.9 percent to $33.74.

GAME OVER: GameStop plunged after the company said it will no longer pursue a sale because of difficulty securing financing. The video game retailer is at its lowest value in nearly 14 years. The stock fell 28 percent to $11.14.

TRADE SPAT: American and Chinese negotiators will sit down for two days of trade talks starting Wednesday in Washington. Those talks could be more tense than usual. China has called on Washington to “stop the unreasonable crackdown” on telecom equipment maker Huawei, warning it would defend its companies. The statement comes after the U.S. escalated pressure on the tech giant by indicting it on charges of stealing technology and violating sanctions on Iran.

GETTING OUT: British lawmakers will debate and vote Tuesday on a “Plan B” for the country’s impending exit from the European Union. They may also try to amend the plan. Analysts note it is likely that lawmakers will also push for a delay to the March 29 departure, giving them more time to find common ground. Britain is set to leave the bloc exactly two months from now, with or without a divorce deal.