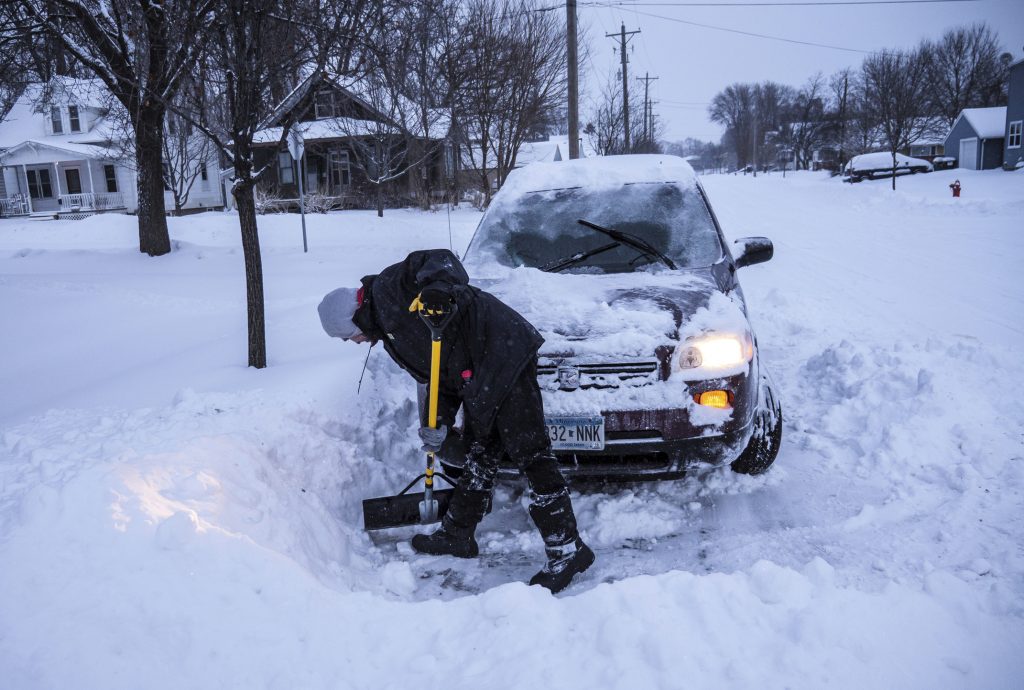 Heavy snow and gusting winds created blizzard-like conditions Monday across parts of the Midwest, prompting officials to close hundreds of schools, courthouses and businesses as forecasters warn that dangerously cold weather is right behind the snowstorm.

Snowplow drivers were having trouble keeping up with conditions in Wisconsin and Minnesota, where up to 14 inches of snow is expected. Chicago-area commuters woke up to heavy snowfall and more than 5 inches of snow already on the ground.

But it’s the plunging temperatures expected later this week that have forecasters especially concerned. Wind chills could dip to negative 55 degrees in northern Illinois, which the National Weather Service calls “possibly life-threatening.” In Minnesota, temperatures on Wednesday could fall to 30 degrees below zero but feel as cold as 60 below because of the wind chill, said meteorologist Tyler Hasenstein. Similar weather is expected in Wisconsin.

“I think the proper term is nasty cold,” Hasenstein told the Star Tribune. “We are very confident this cold is going to be significant. … People are right to be concerned.”

Cold weather advisories are in effect across a broad swath of the central U.S., from North Dakota to Missouri and spanning into Ohio. Temperatures will be as many as 20 degrees below average in parts of the Upper Great Lakes region and Upper Mississippi Valley, according to the National Weather Service.

The largest public school districts in Wisconsin and Minnesota were among those closed Monday, including districts in Milwaukee, Minneapolis and St. Paul. The Minnesota State Patrol was responding to scores of spin-outs and crashes early Monday in the Twin Cities metro area, even before the busiest commute time, because of snow-covered and icy roads.

“Plows are out across the state. Heavy snow overnight and blowing and drifting snow are making for some tough conditions,” Minnesota Department of Transportation spokesman Kevin Gutknecht said.

In Wisconsin, plow drivers were having a difficult time keeping up with the snow in Sheboygan. Minutes after a plow passed, roads were once again becoming snow-covered, according to the Department of Public Works.

Courthouses and most offices were closed in Milwaukee, Waukesha, Columbia and Washington counties, while more than three dozen flights were canceled early Monday at Mitchell International Airport in Milwaukee County. The cold also prompted officials to close some schools in eastern Iowa.

In eastern North Dakota, officials have issued travel alerts because of blowing snow.