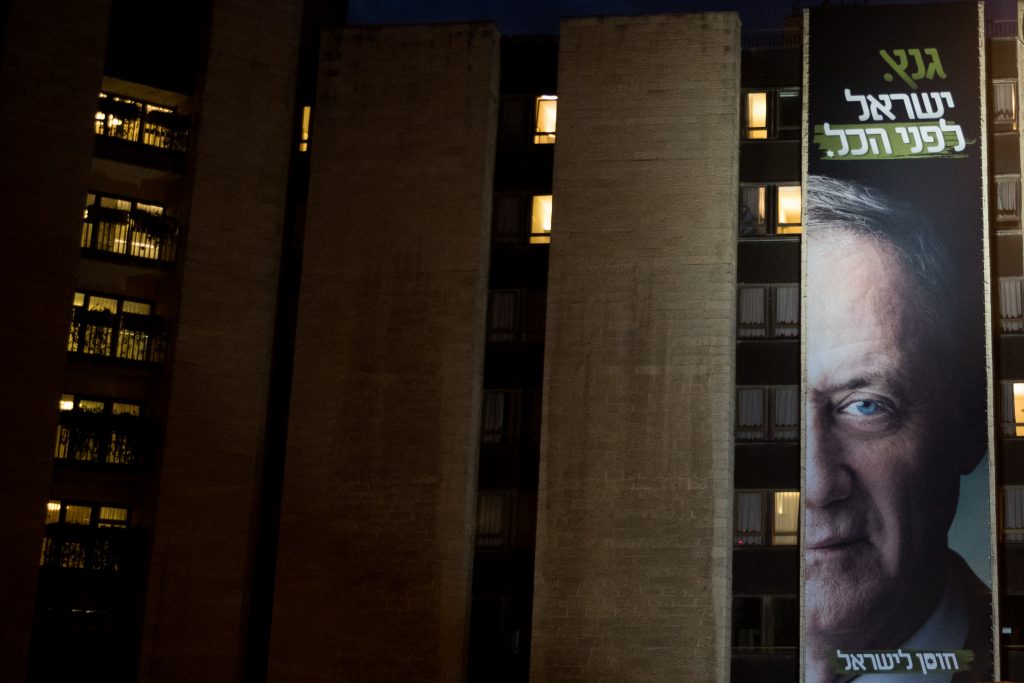 Huge campaign posters featuring a photo of Benny Gantz have already made their appearance in major Israeli cities, along with a series of videos touting his terrorist-crushing record as IDF chief of staff, but Gantz himself enters the fray in a speech on Tuesday night.

Previews of his first campaign speech were already making headlines on Monday night as Gantz was reportedly planning to focus on the incumbent, Israeli Prime Minister Binyamin Netanyahu.

“In the past week, various parties suggested several speech texts to Israel Resilience’s chairman,” the party said in a statement. “One of the drafts that weren’t approved ended up in the hands of some media outlets.

“Tomorrow, at 8 p.m., the citizens of Israel are invited to watch the real speech.”

“Israel is not a monarchy and there is no king or queen. The Netanyahu family is not a royal family, and Netanyahu is not a king. This is a bad and corrupt government that is ruling the people,” he is expected to say.

Along those lines, he is also expected to come out in favor of limiting the premiership to two terms.

Beyond that, the speech is likely to be rather general than specific on any issues, advocating national unity versus division.

A campaign ditty reflects the theme, with lyrics like “There is no right wing or left wing, there is only Israel, before everything else.”

“We came to win, to go until the end, the power of togetherness does us nothing but good,” the song continues, urging Israelis to “think like patriots.”

The message was rejected as patently false by Likud candidate Gideon Saar, who said on Monday that “Israel does indeed have a Right or a Left, and it is unacceptable to say otherwise, to pretend to have no views or to try to hide them.”

“By the time there’s a hearing against Netanyahu, if it happens, we’ll think of what to do. It’s inappropriate for one man to replace a government. Worthy as he may be, [Attorney General Avichai] Mandelblit cannot change the government, but rather decide to indict or not to indict. In the political field, they [don’t] decide what to do based on the decision of one person,” Bennett said at the Institute for National Security Studies.

“A lot of senior officials’ cases ended in nothing. Millions of Israelis will shape the situation with a vote, and then with all due respect to all the jurists, the millions should be allowed to express their position on who leads the State of Israel; otherwise we’ll just pass it on to the judicial system to decide who’ll be in power. The public will take everything into account and decide who to vote for,” added Bennett.

Meanwhile, the latest opinion poll indicated that an alliance of center-left parties could defeat Netanyahu.

If Yesh Atid and Gantz’s Israel Resilience ran together with former IDF Chief of Staff Gabby Asheknazi, however, the poll found, they would beat the Likud, winning 34 seats to 26 for Likud. In the event that Labor, former Defense Minister Moshe Yaalon’s Telem party, Tzipi Livni’s Hatnuah, and former premier Ehud Barak also join a “grand alliance,” they would take 40 seats.

So far, however, all efforts to negotiate any combination at all have foundered, in large part over the question of who gets to be No. 1 on the list.

In a more likely matchup, the TNS Teleseker poll had Likud with 28, ahead of Gantz with 15, followed by Yesh Atid with 13, each running separately. Arab Joint List and breakaway Ta’al parties would have combined 12.

The New Right party would win 9 seats, while Labor would get just 8. United Torah Judaism would rise from its current 6 to 7, while Shas would fall from 7 to 5, Meretz 5, Orly Levy’s Gesher 5, Kulanu 5, Yisrael Beytenu 4, Jewish Home 4. Tzipi Livni’s Hatnuah would fail to cross the threshold.