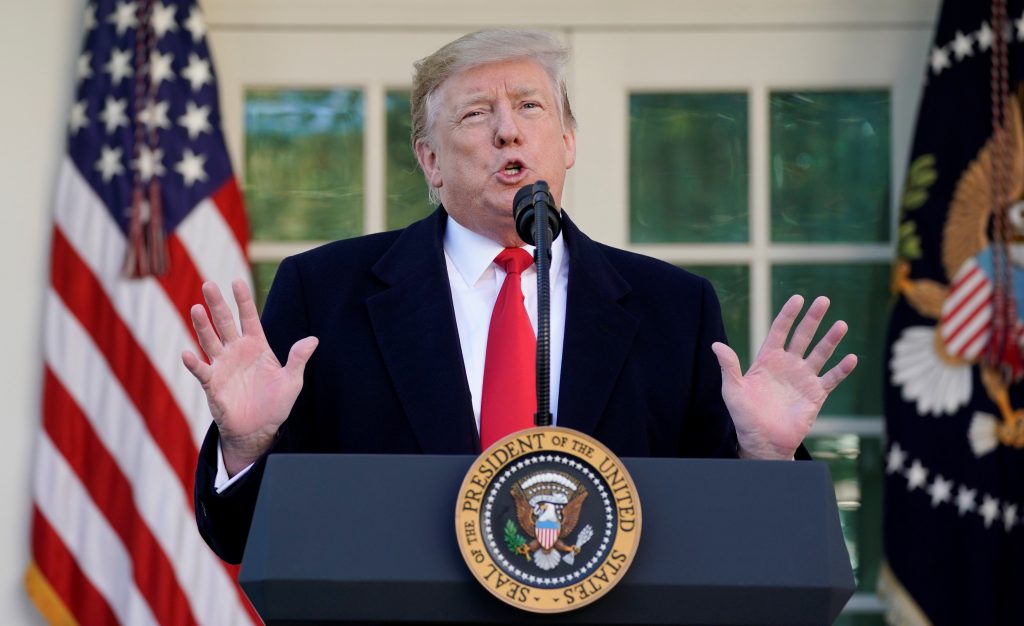 President Donald Trump signed a bill Friday to reopen the government for three weeks, backing down from his demand that Congress give him money for his border wall before federal agencies get back to work.

Standing in the Rose Garden, Trump said he would sign legislation funding shuttered agencies until Feb. 15 and try again to persuade lawmakers to finance his long-sought wall. The deal he reached with congressional leaders contains no new money for the wall but ends the longest shutdown in U.S. history.

First the Senate, then the House swiftly and unanimously approved the deal. Late Friday, Trump signed it into law. The administration asked federal department heads to reopen offices in a “prompt and orderly manner” and said furloughed employees can return to work.

Trump’s retreat came in the 35th day of the partial shutdown as intensifying delays at the nation’s airports and another missed payday for hundreds of thousands of federal workers brought new urgency to efforts to resolve the standoff.

“This was in no way a concession,” Trump said in a tweet late Friday, fending off critics who wanted him to keep fighting. “It was taking care of millions of people who were getting badly hurt by the Shutdown with the understanding that in 21 days, if no deal is done, it’s off to the races!”

Trump still made the case for a border wall and maintained he might again shut down the government over it.

“If we don’t get a fair deal from Congress, the government will either shut down on Feb. 15, again, or I will use the powers afforded to me under the laws and Constitution of the United States to address this emergency,” Trump said.

The president has said he could declare a national emergency to fund the border wall unilaterally if Congress doesn’t provide the money.

As part of the deal with congressional leaders, a bipartisan committee of House and Senate lawmakers was being formed to consider border spending as part of the legislative process in the weeks ahead.

“They are willing to put partisanship aside, I think, and put the security of the American people first,” Trump said. He asserted that a “barrier or walls will be an important part of the solution.”

The deal includes back pay for some 800,000 federal workers who have gone without paychecks. The Trump administration promises to pay them as soon as possible.

Also expected is a new date for the president to deliver his State of the Union address, postponed during the shutdown. But it will not be Jan. 29 as once planned, according to a person familiar with the planning but unauthorized to discuss it.

As border talks resume, Senate Majority Leader Mitch McConnell said he hopes there will be “good-faith negotiations over the next three weeks to try to resolve our differences.”

Schumer said that while Democrats oppose the wall money, they agree on other ways to secure the border, “and that bodes well for coming to an eventual agreement.”

In striking the accord, Trump risks backlash from conservatives who pushed him to keep fighting for the wall. Some lashed out Friday for his having yielded, for now, on his signature campaign promise.