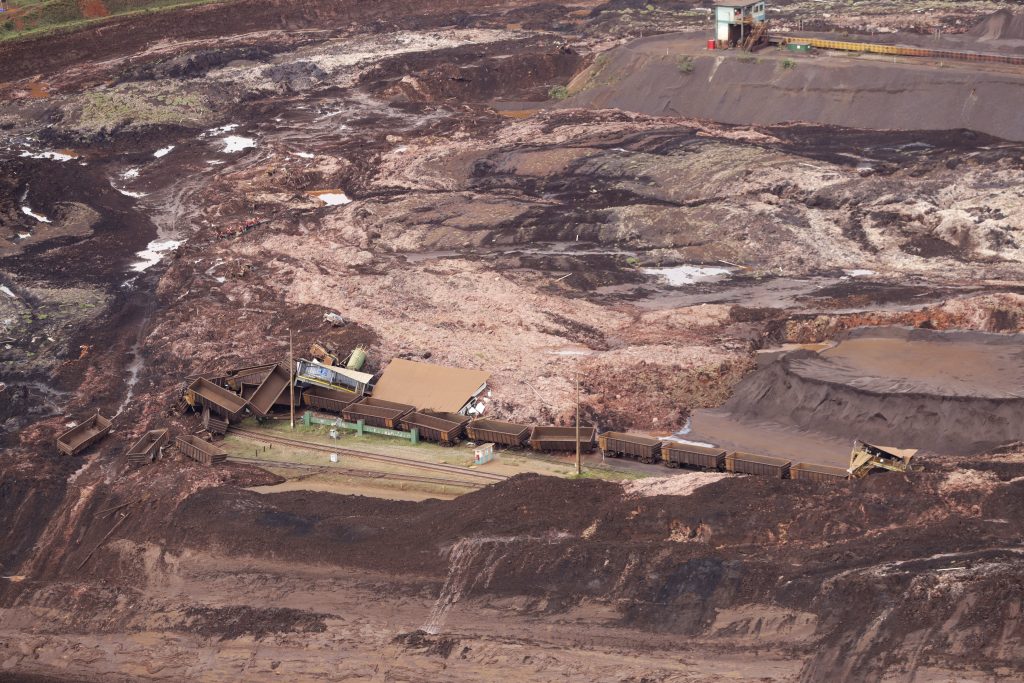 Brazilian firefighters said on Saturday that at least 34 people were killed when a dam burst at an iron ore mine owned by Vale SA, as rescuers continued to search for hundreds still missing.

The Minas Gerais state fire department also said 23 people have been hospitalized after the dam released a torrent of mud on Friday, leaving a roughly 500-foot-wide wake of destruction.

In an earlier statement, the department had said 300 people were still missing and 46 had been found alive, a figure that it did not update in its latest disclosure.

Firefighters focused their hopes for finding survivors on a bus, a train, mining offices and nearby homes that were buried on Friday in mud after the dam break at Vale’s Corrego do Feijao facility in Minas Gerais state.

Frantic family members of the missing crowded into a warehouse set up by Vale for those affected, next to a stretch of river now demolished by the sludge. More than a dozen helicopters helping to survey the area took off and landed from a soccer field nearby.

Daily Folha de S.Paulo reported Saturday that the dam’s mining complex, owned and operated by Brazilian mining company Vale, was issued an expedited license to expand in December due to “decreased risk.”

Preservation groups in the area say the approval was unlawful.

Lt. Pedro Aihara, a spokesman for state firefighters, told reporters that they had found a bus they believed could be filled with bodies. However, accessing the bus buried in yards of mud was proving difficult.

“We need a special machine to access the structure and recover victims,” Aihara said. “The number of dead is going to go up.”

Israel said it was sending a mission to Brazil to help in rescue operations and provide aid. The mission will leave within 24 hours, according to a statement by Israeli Prime Minister Binyamin Netanyahu’s office.

Firefighters distributed to news outlets lists of people who had been rescued or accounted for. But there were still scores of families in the city desperately awaiting word on their loved ones.

For many, hope was fading to anguish.

The status of others in the city of Brumadinho was unknown Saturday, but the level of devastation quickly led Bolsonaro and other officials to describe it as a “tragedy.”

The rivers of mining waste raised fears of widespread contamination.

According to Vale’s website, the waste, often called tailings, is composed mostly of sand and is non-toxic. However, a U.N. report found that the waste from a similar disaster in 2015 “contained high levels of toxic heavy metals.”

Vale CEO Fabio Schvartsman said he did not know what caused the collapse. About 300 employees were working when it happened. About 100 had been accounted for, and rescue efforts were underway to determine what had happened to the others.

“The principal victims were our own workers,” Schvartsman told a news conference Friday evening, adding that the restaurant where many ate “was buried by the mud at lunchtime.”

After the dam collapsed in the afternoon, parts of Brumadinho were evacuated, and firefighters rescued people by helicopter and ground vehicles. Several helicopters flew over the area on Saturday while firefighters carefully traversed heavily inundated areas looking for survivors.

Rooftops poked above an extensive field of the mud, which also cut off roads. The flow of waste reached the nearby community of Vila Ferteco and a Vale administrative office, where employees were present.

On Friday, Minas Gerais state court blocked $260 million from Vale for state emergency services and is requiring the company to present a report about how they will help victims. On Saturday, the state’s Justice Ministry ordered an additional $1.3 billion blocked.

Another dam administered by Vale and Australian mining company BHP Billiton collapsed in 2015 in the city of Mariana in Minas Gerais state, resulting in 19 deaths and forcing hundreds from their homes.

Considered the worst environmental disaster in Brazilian history, it left 250,000 people without drinking water and killed thousands of fish. An estimated 60 million cubic meters of waste flooded rivers and eventually flowed into the Atlantic Ocean.

Schvartsman said what happened Friday was “a human tragedy much larger than the tragedy of Mariana, but probably the environmental damage will be less.”

Bolsonaro, who assumed office Jan. 1, did a flyover of the area on Saturday.

On Twitter, he said his government would do everything it could to “prevent more tragedies” like Mariana and now Brumadinho.

The far-right leader campaigned on promises to jump-start Brazil’s economy, in part by deregulating mining and other industries.