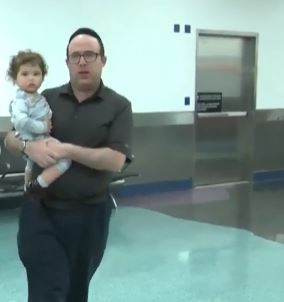 An Orthodox couple returning to Detroit from Miami were ordered off their American Airlines flight, leaving them stranded in Florida overnight.

Yossie and Jenny Adler, along with their nineteen-month-old child, were preparing to take off on their flight Wednesday night when they were escorted off the plane.

“All of a sudden, as soon as they took us off, they closed the gate and then they said, ‘Sorry, sir, some people complained you had body odor and we’re not letting you back on,’” Adler told local reporters from ABC 10 in Miami.

“There’s no body odor that we have,” Adler said in the morning at Miami International Airport. “There’s nothing wrong with us.”

Indeed, Mrs. Adler stated that they stopped several people at the airport, and although it was embarrassing, they asked them, “Do you think we smell? Because we just got kicked off a plane for smelling.”

Mr. Adler said that he was told that his luggage would be removed from the flight, but apparently it was left aboard and went to Detroit. Although they were given vouchers for the hotels and booked on a flight the next morning, they were left without their clothing or luggage, including their child’s stroller and car seat.

American Airlines sent a statement to Local ABC 10 on Wednesday night acknowledging the reason for their removal.

“Mr. Adler and his wife were removed from the flight when several passengers complained about their body odor,” the statement said. “They have been booked into a hotel for the night and given meal vouchers. They have been rebooked on a flight Thursday.”

The Adlers eventually boarded a flight on Thursday morning without incident and successfully made their way to Detroit, where they were reunited with their luggage.

Although they are now safe at home, Yossie Adler demands an explanation from the airline. “I want them to own up to what really happened and to tell me the truth,” he said. “What was it?”