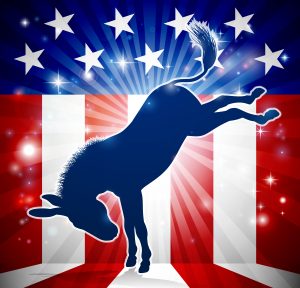 Donald Trump is an all-consuming force in American politics, yet the leading Democratic presidential contenders so far are choosing to mostly ignore the president as they launch their campaigns.

Three top-tier 2020 hopefuls, Sens. Kamala Harris, Kirsten Gillibrand and Elizabeth Warren, skipped talking about the man who fires up the Democratic base when they recently announced bids for their party’s nomination. For others who’ve announced or are considering runs, the president is at most a bit player in their pitches.

The president’s absence from Democratic campaign rhetoric reflects a mix of Trump fatigue among some progressives and the more urgent need for candidates to distinguish themselves in a crowd of potentially more than a dozen contenders.

“The major challenge these Democrats face is differentiating themselves from each other, and they won’t make much headway towards that goal by focusing on Trump,” said Brian Fallon, a former aide to Hillary Clinton’s 2016 campaign who runs the progressive judicial group Demand Justice. “Among Democratic primary voters, it is baked into the cake already that Trump is a horrible president.”

Harris’s video Monday announcing her bid made no mention of the president as she told viewers she’s running to protect the “values we as Americans cherish.”

During a nearly 9-minute interview on ABC that day, the Californian vowed to “stand up and fight for the best of who we are” and didn’t name Trump, even while discussing the government shutdown. She pivoted off a question about whether he should be impeached and instead called for protecting the Russia investigation.

Warren’s video kicking off her exploratory committee ran 41/2 minutes without mentioning the president, instead offering a lengthy prescription and prognosis for the shrinking middle class. She highlighted her efforts to confront Wall Street and said the wealthy and big corporations rig the system so politicians will “cut ’em a fatter slice” of the economic pie.

Gillibrand, announcing her candidacy last Wednesday on CBS, said she’s running to combat “the system of power” that entrenches “institutional racism” and rewards “corruption and greed.” Trump didn’t make the cut; her only mention of him over the 10-minute interview came when asked about the government shutdown.

Former Obama administration Cabinet secretary Julian Castro announced his candidacy on Jan. 12 and talked about the incumbent just once at the end of a 25-minute speech. For the most part, he emphasized a generational pitch as a 44-year-old Latino. “I’m running for president because it’s time for new leadership, because it’s time for new energy,” Castro said, vowing that his first act will be to rejoin the Paris climate accords.

By contrast, in his first official address as a presidential candidate in June 2011, eventual Republican nominee Mitt Romney made extended remarks assailing the man he hoped to replace, saying that “Barack Obama has failed America.”

A strategy of ignoring Trump was employed by many of the Democrats who were successful in the November midterm congressional elections. Even though polls showed anger at Trump was a prime motivator for Democratic voters, candidates stuck to a script that emphasized their plans to reverse government dysfunction and issues with local significance, such as health care. It’s also partly a response to a transition in the Democratic Party that’s more reliant on a young and diverse base that is drifting leftward on economic and cultural issues.

“It’s going to take more than just taking on Trump. You’re going to have to have policy ideas,” said Bakari Sellers, a former South Carolina state senator and Democratic nominee for lieutenant governor, who said voters want a candidate with a vision for the country.

The Democratic candidates are using their campaigns to draw subtle contrasts with Trump, albeit often without naming him. Harris said nobody should interfere with the American justice system “for political purposes”; Warren’s video splashed an image of the president as she said politicians will do “anything to hang onto power”; Gillibrand highlighted bipartisan achievements in the Senate; and Castro praised the media as “the friend of the truth.”

Democratic contenders can’t avoid President Trump entirely. Sometimes they use their social media accounts to criticize his decisions or rhetoric. Other times they get asked about him. Some lesser-known contenders may opt to go after him to gain attention.