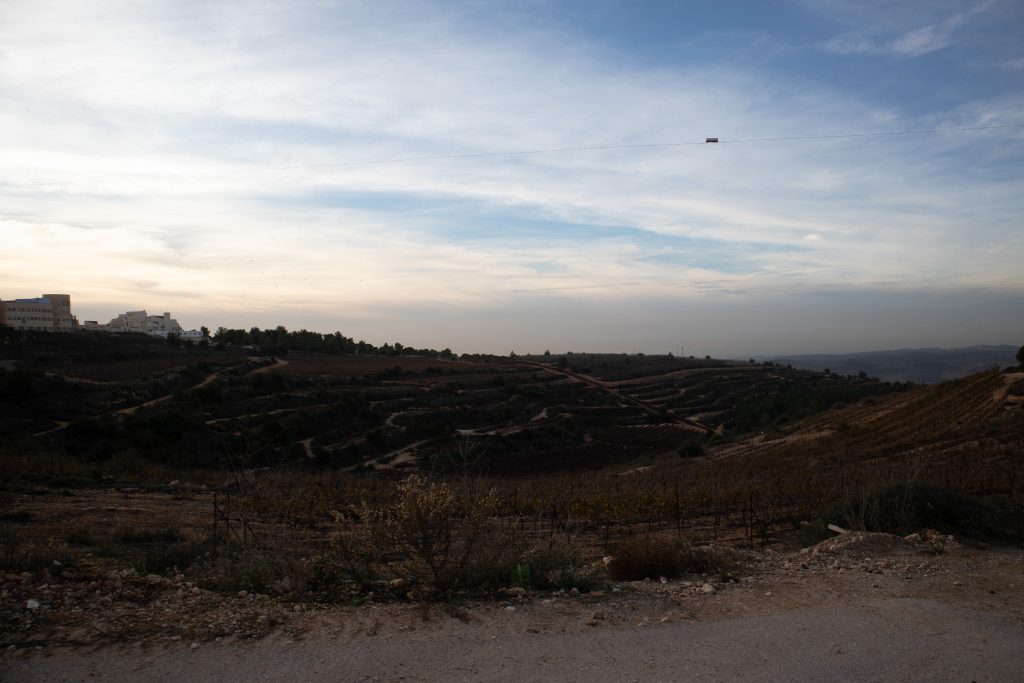 The Palestinian Authority has recently increased its efforts to take control of a strategic area in the Nachal Cheletz area between Yerushalayim and Gush Etzion.

Regavim, a research-based legal advocacy NGO dedicated to ensuring accountable use of Israel’s national land, published on Wednesday a report which exposes the PA’s construction work at Nachal Cheletz, near Har Gilo on the outskirts of Yerushalayim.

A large number of heavy tractors has been turning the landscape of the riverbed into a wide and flat expanse, and ancient agricultural huts have been renovated and transformed into residential buildings for Arabs.

These lands are Survey Lands which are not privately owned and can be declared state lands.

Yishai Chemo, the Regavim director in Yehudah and Shomron, says that the engineering work and the high cost of the work prove that this is not a private initiative.

Regavim has contacted the IDF’s Civil Administration several times demanding that “real enforcement be carried out in this super-strategic area, but at the moment the situation is that the work continues unabated,” he added.

Downstream, there are many lands that were purchased by the JNF years before the establishment of the state, and recently the JNF and the Civil Administration have begun planting trees the area.

The Gush Etzion Regional Council and Regavim have documented several Arab incursions into the JNF-owned land, as well as the damaging and uprooting of trees planted in the area.

“The theft of land financed by Abu Mazen [PA head Mahmoud Abbas] and his cohorts is unfortunately not new to us,” stated Gush Etzion Regional Council head Shlomo Ne’eman.

“This phenomenon should concern all policy-makers in the State of Israel. It is unthinkable that they are destroying and taking over state lands that are supposed to be declared state lands in the near future, undisturbed,” he added.

“Our Arab neighbors systematically steal land and exploit the lack of enforcement, at the end of which they rely on presumptions under a law that discriminates against the Israeli residents of Yehudah and Shomron,” he charged.

The Civil Administration told Regavim that “the implementation of enforcement will be determined in accordance with the order of priorities.”

The Knesset’s Foreign Affairs and Defense Subcommittee for Yehudah and Shomron in June 2018 convened a special meeting to discuss what it referred to as the PA’s “strategic takeover of land in Area C.”

Area C comprises some 60 percent of the Yehudah and Shomron region that remained under full Israeli control as part of Oslo interim peace accords.

Israel seeks to keep control of the area, which is home to close to 500,000 Israelis, under any final agreement.

According to the interim peace accords, any construction in Area C requires permission from Israel. However, the move by the PA to seize Israeli land is an attempt to change facts on the ground and influence the outcome of peace negotiations.

“The territorial takeover of lands in Area C is part of the strategic outlook of the PA, which has even set up an official office to coordinate its activities in Area C,” MK Mordechai Yogev, the committee chairman, said. “At the same time, the subcommittee is under the impression that our government elements have not been properly monitoring this issue, and there is no organized activity to stop this phenomenon.”