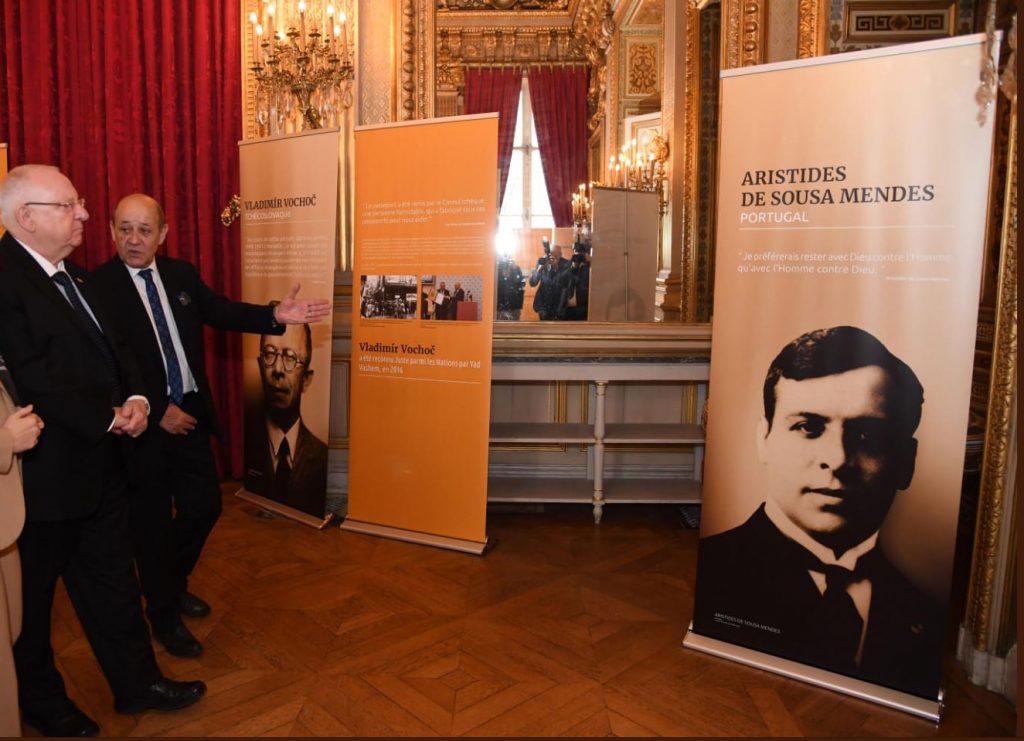 Israeli President Reuven Rivlin on Thursday opened an exhibition titled “Beyond Duty – Saving Jewish Lives and Showing the Way” in France, ahead of the International Holocaust Memorial Day which will be marked on Sunday.

The exhibition tells the stories of diplomats who risked their lives and the safety of their families to rescue hundreds and even thousands of Jews.

Diplomats used their immunity and authority and helped save the lives of many people. Some 36 diplomats in some 20 countries, recognized as Righteous Among the Nations for their actions, did so and saved an estimated 200,000 lives.

The “Righteous Among the Nations” designation is a title bestowed upon gentiles who rescued Jews during the Holocaust. Israel has recognized over 26,500 such individuals.

The exhibition is being displayed in Israeli diplomatic missions around the world as well.

One of these astounding stories is that of Aristides de Sousa Mendes, Portuguese Consul in Bordeaux, France. Defying official orders not to issue transit visas, especially to Jews, the “Angel of Bordeaux” worked tirelessly to issue tens of thousands of life-saving visas.

When this was discovered, Sousa Mendes was dismissed and died destitute and penniless in 1954.

“Even if I am fired, I can only act as a Christian and according to my conscience,” he said. “If my actions are seen as a refusal of orders, I would rather stand with G-d against man than with man against G-d.”

De Sousa Mendes was recognized as Righteous Among the Nations by the Yad Vashem Holocaust memorial in 1966.

“Some 200,000 people were saved by the actions of these diplomats, Righteous Among the Nations,” Rivlin said. “Their stories are a unique part of the history of the Holocaust. They prove that we always – as individuals, as representatives of our people and as countries – have the ability and the responsibility to make choices.”

Rivlin took the opportunity to call on Europe to step up its fight against the rabid anti-Semitism that has been flooding the continent.

“Just last year, 2018, there was a rise of 69 percent in the number of anti-Semitic incidents in France compared with the previous year. These are difficult and unacceptable findings. We need strong European leadership to challenge anti-Semitism in all its forms.”

“We will remember these diplomats as Righteous Among the Nations forever,” said the president. “May the memories of all those who perished in the Holocaust be bound up in the bond of life.”

French Foreign Minister Jean-Yves le Drian, who accompanied Rivlin, said that “today, we honor the memories of diplomats who saved Jews who were destined to be killed by the Nazis. Defying orders, they simply ignored the rules and regulations and gave Jews under threat passports, visas and diplomatic refuge in their embassies.”

“The exhibition we are opening today shows us the obligations of humanity. This is not just an obligation to those who died, but also to those who are alive today. France is not afraid of confronting its own history,” he added.