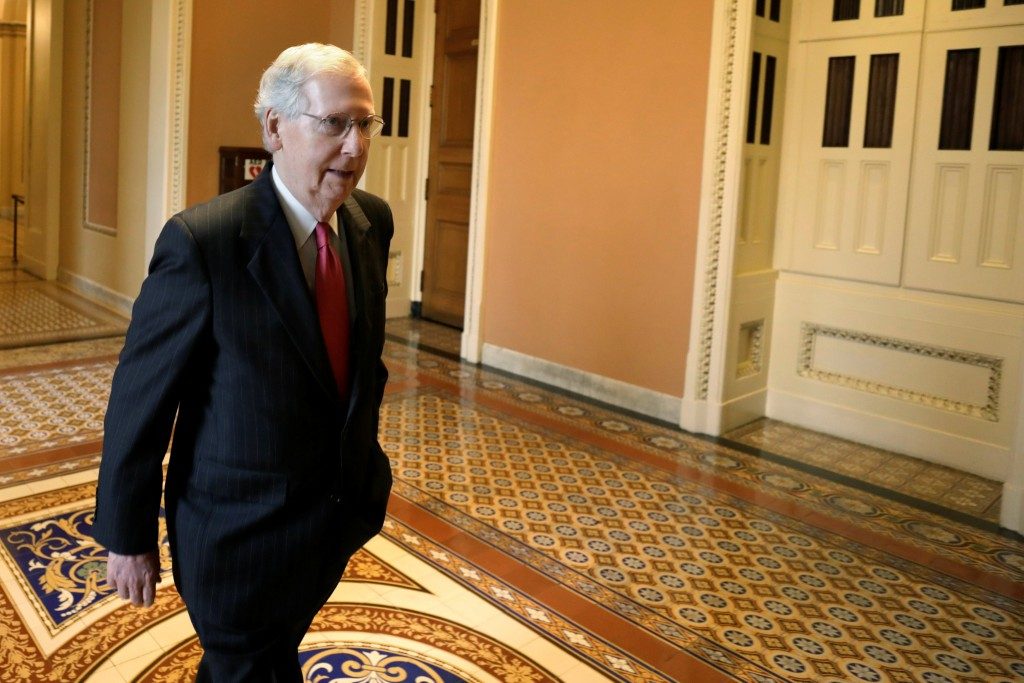 There was no sign of quick relief for 800,000 federal workers going without pay because of the partial government shutdown as the Senate scheduled votes on competing proposals to end the month-long impasse that both faced long odds.

Republican Senate Majority Leader Mitch McConnell said he planned to hold a vote on Thursday on a Democratic proposal that would fund the government for three weeks but does not include the $5.7 billion in U.S.-Mexico border wall funding demanded by President Donald Trump.

Its prospects appeared grim. The House of Representatives has passed several similar bills, but Trump has rejected legislation that does not include border wall funding. McConnell previously said he would not consider a bill the Republican president refused to sign.

McConnell also planned to hold a vote on legislation that would include border wall funding and relief for “Dreamers,” people brought illegally to the United States as children, a compromise Trump proposed on Saturday.

Many Democratic leaders dismissed the deal as a “non-starter” and said they would not negotiate on border security before reopening the government.

Democrats have said they would not trade a temporary restoration of the immigrants’ protections from deportation in return for a permanent border wall they view as ineffective. In 2017, Trump moved to end the Dreamers’ protections, triggering a court battle.

Yet Trump appeared to lose that bargaining chip after the Supreme Court on Tuesday declined to consider an administration appeal of lower-court rulings that allowed for Dreamers’ continued protections.

The hundreds of thousands of federal workers who are furloughed or working without pay are struggling to make ends meet as the shutdown, the longest in U.S. history, enters its 33rd day on Wednesday.

Many employees as well as contractors were turning to unemployment assistance, food banks and other support. Others began seeking new jobs.

The FBI Agents Association said on Tuesday that investigations of possible financial crimes, drugs and terrorism were being hindered by a lack of funds.

Trump planned to move forward on delivering his State of the Union address next Tuesday, despite House Democratic Speaker Nancy Pelosi’s recommendation that he delay it since government agencies responsible for providing security were affected by the shutdown.

“Those concerns were addressed by the Department of Homeland Security and the United States Secret Service. At this point, we’re moving forward,” White House spokeswoman Sarah Sanders told reporters on Tuesday.