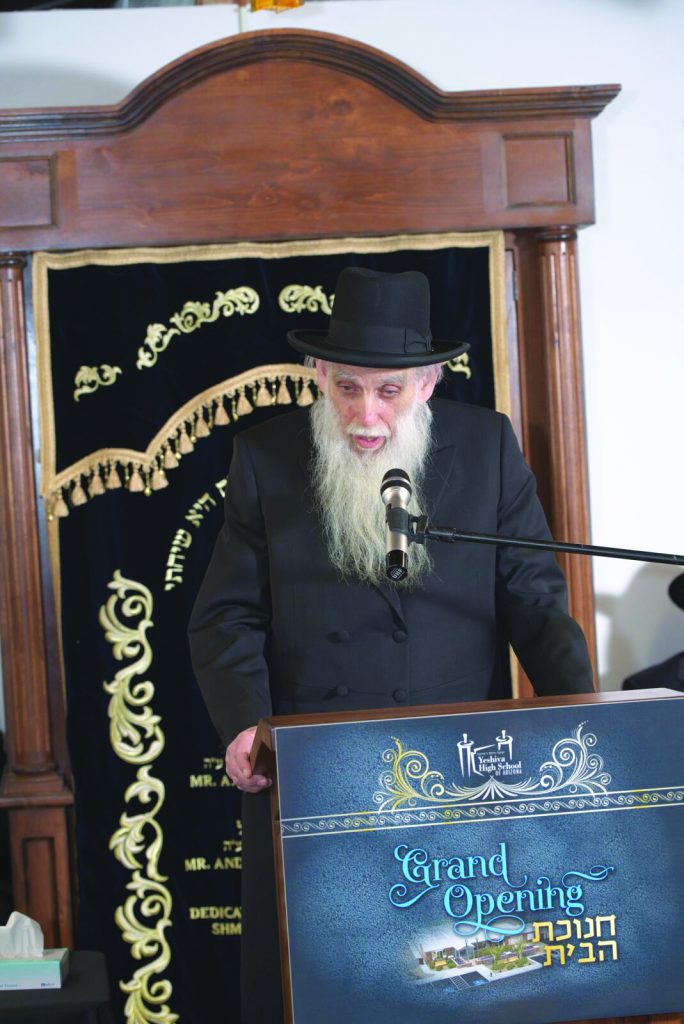 On Motzoei Shabbos Parashas Bo, January 12, Yeshiva High School of Arizona (YHSA) hosted a momentous chanukas habayis, celebrating the completion of their magnificent, state-of-the-art, new building. As the Tenka Rav, shlita, commented at the event, the chanukas habayis was “A real kiddush Hashem.”

After a year and a half of challenges in receiving permits and doing the construction, the new yeshivah building, situated on an acre of land in sunny Phoenix, gives permanence to the yeshivah that has been growing and flourishing since 2010.

Yeshivah High School of Arizona began with eight bachurim in a temporary and small rental. It now has an enrollment of 28 bachurim, with plenty of room to grow. The 5,000-square-foot building is equipped with a beautiful beis medrash, featuring a unique architectural design with sloped ceilings and exposed timber; a kitchen, dining area, offices, and a recreational room.

Outside, there is a full-size basketball court with professional grade hoops and lighting to play at night, a soccer field, and desert landscaping on the rest of the grounds.

The Tenka Rav spoke at Kehillas Ohr HaTorah in Phoenix on the topic of emunah. He explained that we are required to remember Yetzias Mitzrayim twice daily, because emunah in hashgachah pratis needs constant chizuk. He concluded with the words of the famous Ramban at the end of Parashas Bo which speaks of seeing the hand of Hashem in daily events.

Harav Aharon Feldman spoke at Kehillas Ahavas Torah in Scottsdale and was mechazek the kehillah on proper use of cell phones and technology. He explained the passuk “Beni bechori Yisrael,” according to the Gra, that Klal Yisrael stands above others in the areas of taavah, power over others, and shiamum (wasting time).

He explained that improper use of a cell phone can develop these three middos ra’os and encouraged the kehillah to focus on strengthening themselves positively in these areas.

Following Shabbos, over 300 people attended the gala chanukas habayis and were zocheh to hear words of inspiration from many of the chashuve guests.

The Tenka Rav has been involved in the Phoenix community over the past several years and it was a great kavod to have him give divrei pesichah at the event. The Rav spoke with love to the bnei hayeshivah, giving tremendous chizuk and divrei brachah.

Several of the bachurim spoke as well and expressed hakaras hatov to the community for providing them with a makom Torah and harchavas hadaas. Rabbi Sroy Levitansky spoke on behalf of the Lakewood Roshei Yeshivah and shared a personal message from Harav Yeruchim Olshin, shlita, Rosh Yeshivah of Beth Medrash Govoha, who quoted the Meshech Chochmah who wrote that building a yeshivah is the greatest form of harbotzas haTorah.

The chairman of the building committee, Mr. Irwin Pasternack, addressed the crowd, and celebrated the efforts of Rabbi Gavriel Goetz, Menahel of Yeshiva High School of Arizona, and the entire community, in building this beautiful makom Torah.

Mr. David Segal, president of the board, thanked the donors and supporters. He related that he was in awe of how many donors thanked him for the opportunity to give to the yeshivah, as the community looks at building a makom Torah as a zechus not a chov and understands the value of having a permanent and beautiful local yeshivah.

Rabbi Gavriel Goetz then introduced Harav Aharon Feldman, who spoke eloquently and powerfully about his motivation to come to the chanukas habayis. He explained that Torah is “life itself” and building a yeshivah is therefore a celebration of life.

He mentioned a conversation he had with President George W. Bush about school vouchers for Orthodox schools, in which he told the president that, “Education is life itself!” The Rosh Yeshivah related that the president’s jaw dropped, as it was such a novel concept to him.

The evening concluded with a buffet prepared by the wives of the yeshivah’s Rebbeim, and zemiros from local boys who sang a special song in honor of the simchah.