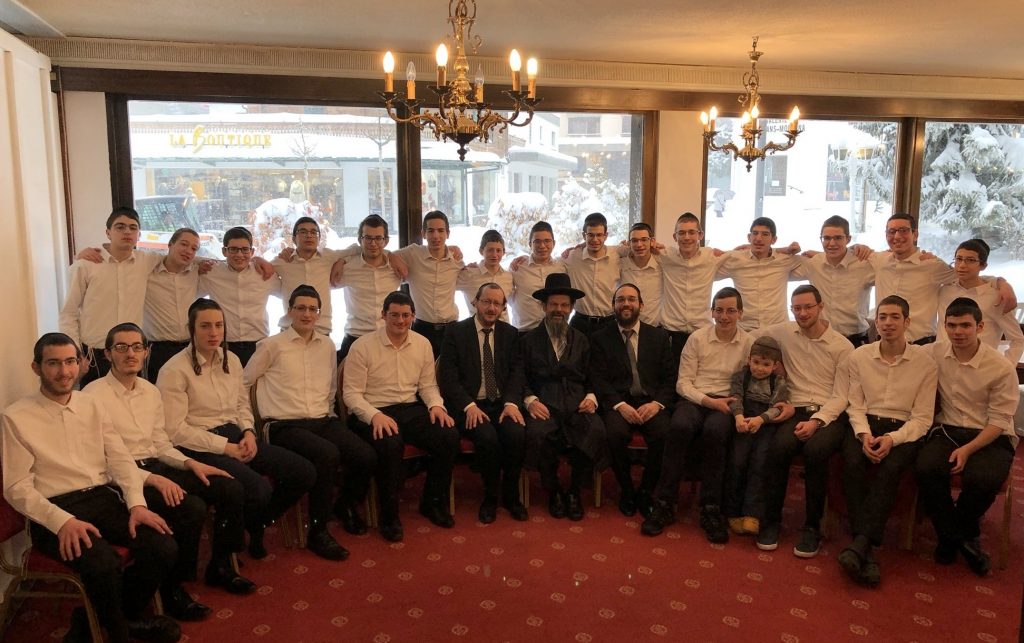 The bachurim of Yeshivah Lezeirim Manchester recently returned from a unique weekend in the Swiss Alps. All the participants were uplifted, not only by the indescribably beautiful Swiss scenery surrounding them, but also by the ruach of the limud Torah that encompassed the whole weekend.

The unusual choice of the yeshivah weekend was prompted by the high standard of learning that all the bachurim have achieved throughout the zman. Anyone entering the beis medrash could feel the vibrant ameilus baTorah that is the trademark of the yeshivah. All the bachurim take turns composing and presenting chiddushei Torah in their chaburos. As a result, the hanhalah decided to hold the annual Shabbos hisachdus weekend in a hotel in Crans Montana in the Swiss Alps. The members of the hanhalah who accompanied the bachurim were Harav Yosef Brandeis, Rosh Yeshivah, Rav Yaakov Rubin and Rabbi Moshe Akiva Brandeis.

The whole trip was filled with Torah. The yeshivah group left Manchester on Thursday afternoon. On arrival in the Geneva airport, they went straight to the beis medrash at Machzikei Hadass Geneva for a leil shishi seder. The learning seder finished at 1 a.m. and was followed by a chaburah from a bachur and a shiur from Rav Yaakov Rubin, both stimulating lively and animated discussions.

In the early hours of the morning, the bachurim went on an unforgettable walk around nearby Lake Geneva. At an impromptu kumzitz by the lakeside, passersby were mesmerized by the hauntingly beautiful niggunim. The group finally arrived at the hotel on Friday morning.

On Erev Shabbos, the bachurim relaxed, taking the cable car and walking in the snow. The tefillos for Kabbalas Shabbos were elevating. The enthusiasm for davening shown by the bachurim in their Manchester beis medrash was temporarily transported to the Swiss hotel. The yeshivah was allocated a separate room, where they enjoyed the tasty Shabbos meal together, followed by a kumzitz flavored with many divrei Torah from the bachurim. Afterward, a full seder limud was followed by an exhilarating walk in the freshly fallen snow. Finally, an oneg Shabbos was held back in the hotel, and continued late into the night.

The learning throughout the weekend, on Shabbos and Sunday was focused on learning the sugya b’iyun in halachah together with shiurim. They also completed in bekius a complete masechta. The learning sedarim attracted the attention of other visitors to the hotel. One of the guests was Harav Chaim Greenfeld, who is a veteran mechanech in the yeshivah world. He commented on the geshmak with which the boys were learning and davening. “In the several decades I have been in the yeshivah world I have never seen such a yeshivah. The bachurim take their learning and davening seriously and also have such geshmak and zest at the same time,” he marveled.

The gala siyum on the masechta was held on Motzoei Shabbos with much festivity. Kaddish after the completion was recited by Mr. Aaron Schwinger, in memory of his father Reb Chaim Schwinger. Aaron is himself a graduate of the yeshivah, and joined the group for the weekend. The spirited singing and dancing at the siyum high up in the Alps drew other guests to join in the simchas haTorah. All types of Yidden were impressed by the quality and conduct of the Yeshivah Lezeirim bachurim. The whole group returned to Manchester on Monday morning, thoroughly invigorated by their weekend break.