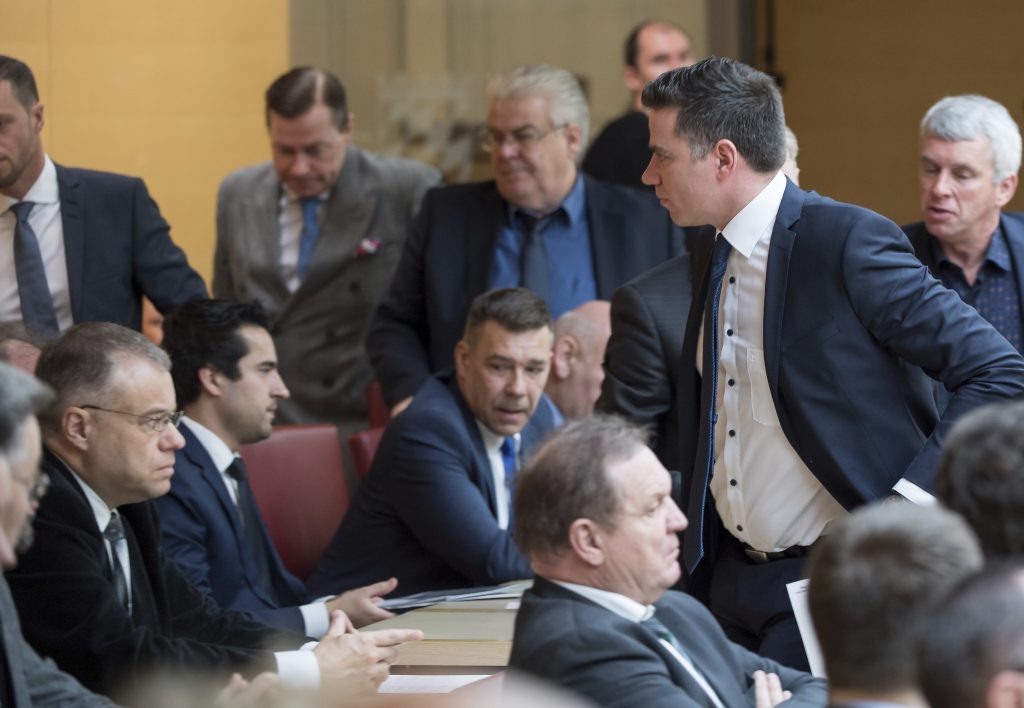 More than a dozen state lawmakers from a German far-right party walked out of the Bavarian parliament during a tribute to Holocaust victims Wednesday after a Jewish leader accused the Alternative for Germany of playing down the crimes of Nazis.

The state lawmakers stood up and walked out after Holocaust survivor Charlotte Knobloch, the former head of Germany’s Central Council of Jews, called the party out by name, saying “this so-called Alternative for Germany bases its politics on hate and marginalization.”

Speaking ahead of Sunday’s observance of International Holocaust Remembrance Day, Knobloch said Alternative for Germany “has downplayed the crimes of the Nazis and has close connections to the extreme right.”

Lawmakers from other parties rose to their feet and gave her a standing ovation.

The AfD, as it’s known by its German initials, first entered the Bavarian parliament last year and is currently in opposition with 22 of 205 seats.

Katrin Ebner-Steiner, who heads the party’s state parliamentary delegation in Bavaria, said in a statement sent to The Associated Press that the walkout was an “appropriate response.”

“The scandal is that the president of the Greater Munich Jewish Community, as a guest of state parliament, abused a memorial service for the victims of the Nazis in order to defame the complete AfD and its democratically elected representatives with the worst blanket insinuations,” Ebner-Steiner said.

Katharina Schulze, a Greens party leader in Bavaria, thanked Knobloch for her “clear and truthful words,” writing on Twitter that “Charlotte Knobloch summed it up perfectly: ‘Never again’ is Germany’s fundamental promise.”

But its rightward drift has prompted some prominent members over the years to quit the party.

Last week, the country’s domestic intelligence agency said it was putting the Alternative for Germany under increased observation amid concerns it was flirting with extremism.

The domestic intelligence service BfV said it would be examining public comments by AfD members and its links to extremist groups, but stopped short of putting the party as a whole under covert surveillance.

BfV’s chief added that the party’s youth section and a party faction linked to a prominent leader in eastern Germany, Bjoern Hoecke, would be scrutinized even more closely because there was sufficient evidence to indicate they could be classified as “extremist organizations.”

AfD has said it is exploring legal action against the BfV.