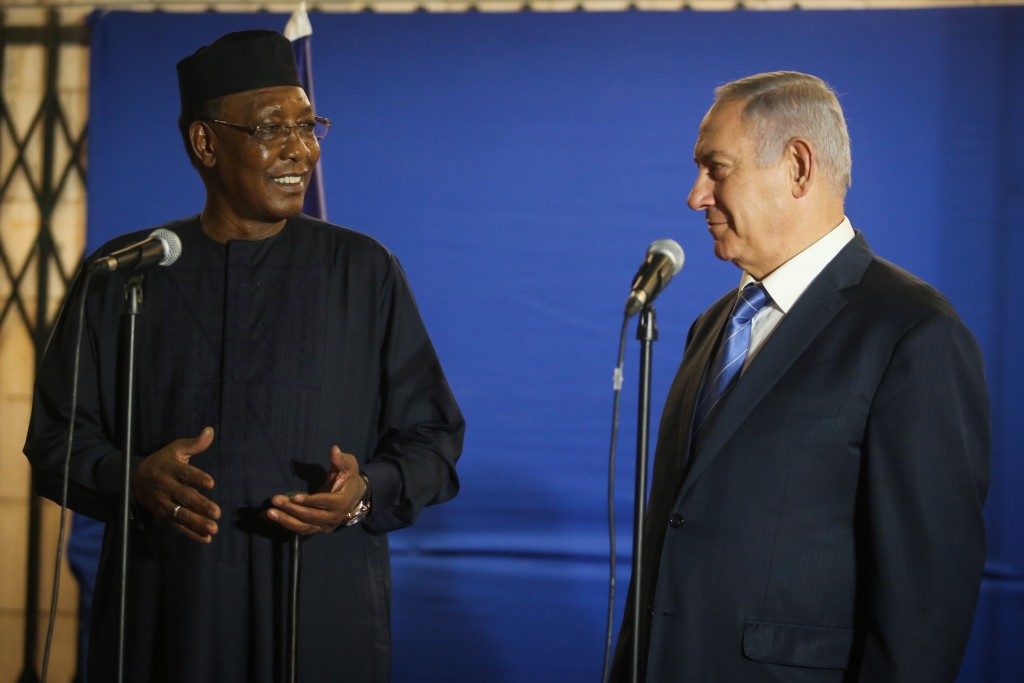 Israel is making inroads among African and Muslim nations because it has what they need.

That, in a nutshell, explains Prime Minister Binyamin Netanyahu’s historic trip this week to Chad, a Muslim-majority country in Central Africa that cut off ties in 1972, as a result of the Six Day War.

Israel’s expertise in areas that are vital to Chad’s economic and security interests have convinced the country’s leaders to overcome their objections to the “Zionist entity” and renew diplomatic relations.

The same is true of moderate Arab countries closer to home, who are reaching out to the Netanyahu government, some more openly, some less, because they feel threatened by Iran and hope that an alliance with Israel, with its advanced military technologies, will protect them.

In all these cases, countries are giving diplomatic recognition in order to get something in return. The driver is self-interest, not doing the right thing.

But with the United States, Israel’s dearest, most loyal friend, things are the exact opposite. For years, Washington stood by Israel economically and diplomatically with no thought of receiving anything in return. To the contrary, there were times when it paid a heavy price for supporting Israel, like back in the 1970s during the Arab oil boycott.

Over the years, as Israel developed, the relationship became more equal, more give and take. But it was always based primarily on U.S. concern for the welfare of the Jewish State, the only democracy in the Middle East, and only then on strategic benefits.

Last week’s announcement that the United States will be purchasing two Israeli-developed Iron Dome defense systems is another example of Americans doing the right thing, just because it’s the good and decent thing to do, and then discovering that their generosity ended up serving their own interest.

After the 2005 “Disengagement,” when Israel unilaterally withdrew from Gaza, the country came under merciless rocket attack from what quickly turned into a Hamas-run terror state. Out of necessity, the Iron Dome anti-missile missile system was created, in record time, to protect the country’s civilian population.

The United States, understanding the urgent need for a solution to the missile threat, generously helped fund the research, development and manufacture of a breakthrough defensive system. Since 2011, Congress provided more than $1.4 billion for Iron Dome, developed by Rafael Advanced Defense Systems. This includes hundreds of millions authorized by former President Barack Obama, who didn’t let his intense disagreements with the Netanyahu government over the peace process get in the way of his concern for the safety of the civilian public.

The U.S. Army needs the Iron Dome to provide its soldiers with cruise missile defense against potential Russian and Chinese threats. According to the timetable established by Congress, this must be done by September 2020.

According to Hamodia military correspondent A. Pe’er, the United States Army doesn’t like to purchase off-the-shelf weapons systems developed by other countries, even close allies like Israel, unless it concludes that it can’t develop a comparable system itself by a given deadline.

The purchase is undoubtedly a feather in Israel’s cap. Iron Dome, in operation for 14 years, has proven itself. The U.S. decision is an endorsement that will likely lead to other countries following suit.

But the ultimate satisfaction for Israel is that it can supply Americans with a system that helps to protect their soldiers. Iron Dome is a chance to pay back, in some small measure, a benefactor who has come through time and again; from President Truman’s recognition of the provisional Jewish government as the de facto authority of the new Jewish state just 11 minutes after David Ben-Gurion’s declaration of independence in Tel Aviv, to President Nixon’s crucial arms airlift during the Yom Kippur War, when Israel was in grave danger of defeat.

With other countries, give and take with Israel is about “interests.” With the United States, it’s about shared values, common goals and deep mutual respect and admiration.

“The United States government and taxpayer have supported the development and production of the Iron Dome program for many years now and so, in that respect, this is not turning to a stranger but to a close partner,” Tom Karako, a missile defense expert at the Center for Strategic and International Studies in Washington, DC, told the Times of Israel.

Mr. Karako is right, but he doesn’t go far enough. Israel is more than a close partner. It is a close friend, who wants good for the United States, and is proud to be able to provide a system that protects U.S. soldiers.