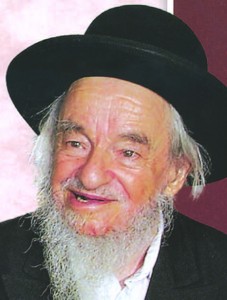 The pilot considered it “nothing extraordinary,” just a maneuver called “skate support” (as reported by TIME), but the rescue mission was undoubtedly daring. About two weeks ago, a skier got caught on a French Alps slope with serious knee trouble. Landing being impossible on such an incline, the pilot precariously angled the helicopter and leaned its skate against the slope, keeping the rotor — which was hair-raisingly close to the snow — moving at a slow clip, just enough to maintain position. Perhaps that pilot was such an expert that he didn’t think much of it, but most would agree that it was indeed quite the daring operation.

But it pales in comparison to the bravery of Harav Yaakov Galinsky, zt”l, who undertook one of the most daring rescue missions ever.

April 1967. Rav Galinsky is 46 years old and running Yeshivas Novardok-Chadera. One day, Rav Galinsky noticed that the vegetable delivery driver looked distraught. His daughter was poised to marry an Arab, and living in his village, Baka el Garbiya. “I’ll go there,” soothed Rav Galinsky, “and talk to her.” The driver was incredulous, “It’s a hostile Arab village, they’ll stone you!” True Novardoker that he was, Rav Galinsky assured him, “I’m not afraid of them. I fear only Hashem.”

Since it was a post-Shemittah year, the yeshivah was purchasing fruits from Arabs. The next delivery, Rav Galinsky asked the driver for a ride to the Arab towns. “Sure,” the driver amicably agreed, “where to?” “Baka el Garbiya.” “No,” the driver exclaimed, “not there! They’ll kill you, and me as well!” “Fine,” Rav Galinsky negotiated, “just drop me off nearby. I’ll find my own way into the village.” No sooner had Rav Galinsky — a fully bearded and frocked, rabbinical-looking Jew — entered the village, and the first stone was whizzing his way. Undaunted, Rav Galinsky asked the projectile-launching youth, “Where’s the Kadi?”

When the vegetable delivery man’s daughter appeared at the door, Rav Galinsky wasted no time: “Your father is going to die of heartache.” “My father?!” she responded angrily, “For a whole year I was dating a boy from Ein Shemer. A complete apostate! And my father was happy as punch. And this Arab boy, who believes in G-d and worships him, why shouldn’t I marry him?!” “Look,” Rav Galinsky told her, “I cannot stay for long. I’m arousing suspicion, and my bus back to Chadera is leaving soon. But I’ll tell you this. Were war to erupt, that apostate boy from Ein Shemer will be one of the first to enlist to protect your father, but the Arab boy you want to marry will be one of the first to sharpen his knife to kill your father. Think about it.” With that, Rav Galinsky left.

Little did he know that within two months, Nasser would close off the Tiran Straits, expel the U.N. troops from Gaza, and the nascent State of Israel would find itself in existential battle with Egypt, Syria, Jordan, and Iraq. It was the Six-Day war. One day, during that incredibly turbulent time, the vegetable delivery man jubilantly exclaimed, “She came back!” Following Rav Galinsky’s visit, the Kadi had insisted that she first spend time acculturating to Islam. At one point, as tensions mounted, her intended boasted about his ready weapons to slaughter all the Jews. Recalling her encounter with the anonymous Rabbi, she envisioned her fiancé slitting her father’s throat with gleaming eyes, finally understood what she had gotten herself into, and hastily made her escape.

I don’t know about you, but I think Rav Galinsky’s one-man mission was about as daring as it gets; far more daring than that French helicopter pilot’s “skate support” maneuver. Not only because he entered the lion’s den with nary a single weapon or backup at his disposal, but even more so because he dared to believe. He dared to believe that even a girl who had left everything and apparently cut herself off forever, even she could be convinced to reconnect with her true self. Yes, Rav Galinsky dared to believe in the inestimable power of the Jewish neshamah, whose flame can never be extinguished.