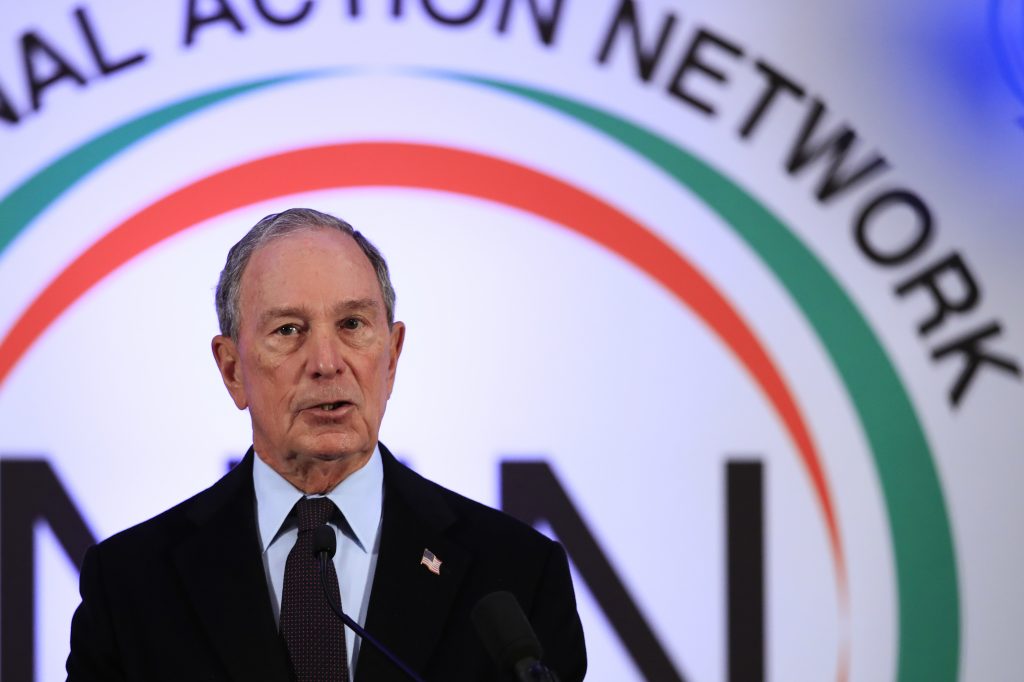 As Americans commemorate Martin Luther King Jr., Democratic presidential hopefuls are fanning out across the country to honor the civil rights leader and make themselves heard on the national stage.

Sen. Kamala Harris, D-Calif., used the holiday to launch a presidential campaign that, if successful, would make her the first woman and the second black candidate to become president.

And an annual rally to observe King’s birthday, held in the capital of South Carolina, a critical early-voting state in the Democratic primary, brought out two senators expected to seek the White House in 2020, Cory Booker of New Jersey and Bernie Sanders of Vermont.

In the nation’s capital, former New York Mayor Michael Bloomberg, who is weighing a presidential bid, spoke at a King event alongside former Vice President Joe Biden, who’s considering his own 2020 run.

While the Democratic field for 2020 is only beginning to take shape, the year that would have marked King’s 90th birthday gives the party’s prominent members a valuable opportunity to address race and, potentially, draw a contrast between their own views and those of President Donald Trump, whose approach to questions of racial justice has sparked criticism from multiple minority groups since he took office.

How Democratic contenders, both those officially in the race and those still mulling campaigns, celebrated the King holiday:

Bloomberg says far too many U.S. politicians don’t seem to care about the victims of gun violence.

He made the remark Monday during speech at a breakfast celebrating King’s life that was held by the Rev. Al Sharpton in Washington.

Bloomberg said many politicians care more about “getting re-elected than saving lives.” He spoke of his own efforts to reduce gun violence, including millions of his own fortune that he’s spent supporting gun control initiatives.

His speech to the predominantly African-American crowd focused on policies he championed while New York’s mayor, such as his efforts to improve schools and reduce neighborhood pollution. And he highlighted how he apologized to the fiancée of Sean Bell, a black man who was shot to death by New York police in 2006, just hours before the man’s wedding. At the time Bloomberg was critical of officers, who he said used excessive force.

He spoke to a gathering of Sharpton’s National Action Network for about 20 minutes.

Sanders is citing King’s “incredible courage in taking on virtually the entire political and economic establishment of his time” in prepared remarks for the South Carolina rally.

“Racial equality must be central to combatting economic inequality, if we are to build an economy that works for all of us, and not just the top one percent,” Sanders said in excerpts obtained in advance by The Associated Press.

The Vermont independent senator lost the state’s 2016 Democratic primary to Hillary Clinton by more than 40 percentage points. His presence at a Columbia church service Monday and a rally after, as well as several other events in the state, signaled that he plans to redouble efforts in South Carolina should he launch a second White House bid in 2020.

“If we end racism in the criminal justice system and in the voting booth, there is no limit to what we can accomplish,” Sanders planned to say.

Harris, a first-term senator and former California attorney general known for her rigorous questioning of President Trump’s nominees, opened the holiday by declaring her bid on ABC. She abandoned the formality of launching an exploratory committee, instead going all in on a presidential campaign.

“I love my country,” she said when asked what qualifies her for the presidency. “And this is a moment in time that I feel a sense of responsibility to stand up and fight for the best of who we are. And that fight will always include, as one of the highest priorities, our national security.”

Harris, 54, grew up in Oakland, California, a daughter of parents from Jamaica and India who were active in the civil rights movement.

King, she said, “was aspirational, like our country is aspirational. We know that we’ve not yet reached those ideals, but our strength is that we fight to reach those ideals. And that inspires me because it is true that we are a country that, yes, we are flawed, we are not perfect, but we are a great country when we think about the principles upon which we are founded.”

Harris also cited her years as a prosecutor in asserting: “My entire career has been focused on keeping people safe. It is probably one of the things that motivates me more than anything else.”

The senator plans a formal campaign launch in Oakland in a week and will have her headquarters in Baltimore. She’s already planning her first trip to an early primary state as a declared candidate. On Friday, Harris will travel to South Carolina to attend the Pink Ice Gala in Columbia, which is hosted by a South Carolina chapter of the Alpha Kappa Alpha Sorority, to which Harris pledged as an undergraduate student at Howard University. The sorority, founded more than 100 years ago, is a stronghold in the black community.

Biden atoned for his role in the passage of a crime bill that imposed stiffer sentences for those convicted of possession of certain drugs — a law that has disproportionately affected the black community.

Biden said he hasn’t “always gotten things right,” but has “always tried.” He also spoke about his support for efforts by the Obama administration to reduce the sentencing disparity.

Biden was the head of the Senate Judiciary Committee when the 1994 crime bill — which is now criticized as having helped create an era of mass incarceration — was passed and signed into law.

“It was a big mistake that was made,” said Biden.

Biden said the sentencing disparity is one example of broader racial injustice in America that needs to be fought.

“White America has to admit there’s still a systematic racism. And goes almost unnoticed by so many of us,” he said.

In Boston, Warren called for a constitutional amendment guaranteeing a right to vote for every American.

Warren made the comment after saying, “People of color have been systematically denied the most basic of human rights: the right to vote.”

“It would guarantee the right to vote to every American citizen and make sure that that vote is counted. Right now there is no constitutional right,” Warren said. “It would help protect and give us grounds for pushing back when localities undercut the right of people to vote.”

Warren said King’s fight was not just about civil rights, but also about economic rights. She said the road to prosperity is steep and rocky for millions of working people, but is “steeper and rockier for black and brown Americans.”

Warren also criticized Trump for the partial federal government shutdown and responded to Trump’s offer to Democrats on Saturday to open the government.

“If the president wants to negotiate over immigration reform, I’m all for it,” she said after the speech. “But open the government and open it now.”