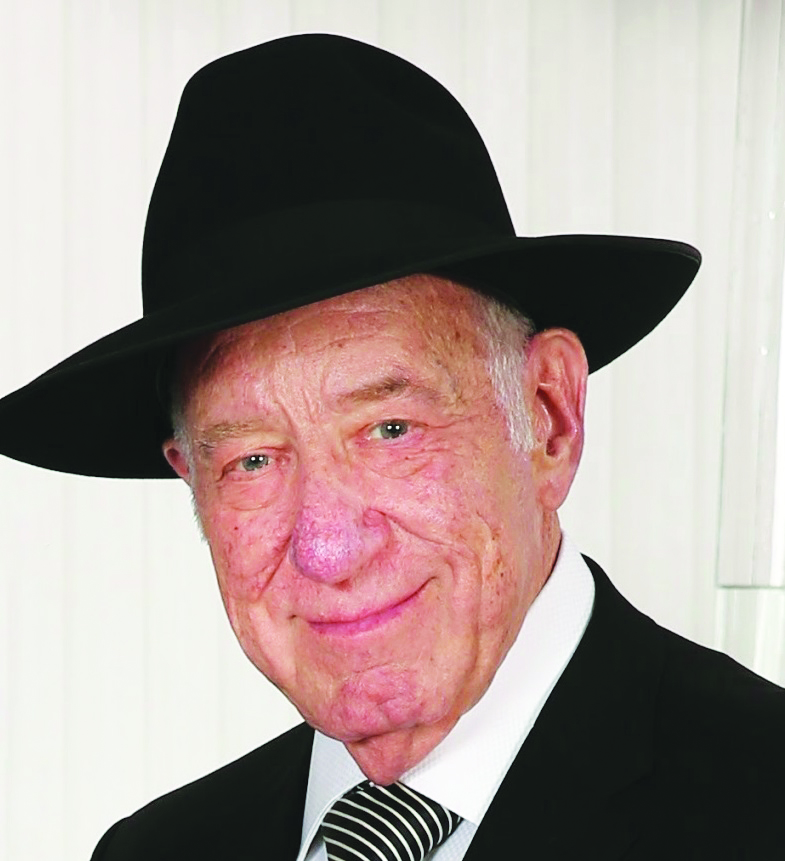 For half a century, he was at the forefront of General Studies programs in the New York City area, serving Yeshivas Chassan Sofer, Yeshiva Yesodei HaTorah of Vien and Yeshiva Torah Vodaath with dedication and devotion.

He utilized the expertise and knowledge he gained from his years as a principal in the NYC public school system to educate the students in a manner which would leave them well prepared to thrive in society when they left the walls of the beis medrash.

In describing his dedication to educating his students in line with the directives of the hanhalah, Harav Yosef Savitsky, Rosh Yeshivah of Torah Vodaath, said at his levayah that he was a true yerei Shamayim.

Reb Yitzchok was the son of Reb and Mrs. Berl and Rivtcha Fink (née Laufer). Reb Berl originated from the small town of Boka which was situated on the outskirts of Lizhensk, while Rivtcha came from the city of Turnow. The Laufer family were Chassidim of Harav Itzikel of Stutchin, zy”a, whose court was then in Turnow.

At the onset of WWII, the Finks miraculously made their escape by train from Berlin, Germany. They had witnessed the horrors of Kristallnacht, and they made their escape from the clutches of the Nazis with only a sefer Torah salvaged from Kristallnacht. They traveled through Holland, and eventually received affidavits from Reb Berl’s brother that allowed them to come to America.

While his older sister Miriam (Freireich) and brothers Abba and Yankel were born in Berlin, Germany, before the family escaped, Yitzchok was born in September 1945, after the family settled in the Bronx.

His family kept their ties with the Chassidus of Stutchin and that of Kolbasov, and they later davened in the Dumbrov beis medrash in Washington Heights. He attended Yeshiva Chassan Sofer, and married Freida, nee Wattenstein, in 1967.

They moved to Boro Park, and Reb Yitzchok began davening at the beis medrash of the Bostoner Rebbe, Harav Moshe, zy”a, where he served as gabbai for 10 years. In addition, his pleasant voice and nusach, along with his choice of classic niggunim which came with a mesorah, made him a sought-after baal tefillah.

Reb Yitzchok was a regular attendee at the Daf Yomi shiur of Harav Yisrael Mayer Kirzner, Rav of Cong. Sons of Judah–Bnei Yehuda, and learned through Shas several times with the Daf Yomi cycle. When he returned from the hospital, he immediately returned to the daf, not wanting to miss any more than he had to. His love for the sefer Noam Elimelech was well known, and he asked to be buried with a copy of the sefer.

He began his career as a teacher in the NYC public school system where he taught for seven years before being promoted to assistant principal. After 16 years, he was appointed as one of the first Orthodox principals in the public school system. At the time, there were only two others (one of whom was the late Rebbetzin Shelia Feinstein, a”h).

In addition to his employment for the Board of Education, Mr. Fink was secular studies principal for several prominent Brooklyn yeshivos: Yeshiva Yesodei HaTorah of Vien where he served for nine years, and Yeshiva Chassan Sofer where he served for eight years. Thirty-six years ago, he joined Yeshiva Torah Vodaath, and led their secular studies department with skill and devotion ever since.

In a conversation with Hamodia, Rabbi Shlomo Stern, a close friend for the past 45 years and a member of the presidium of the board of directors of Torah Vodaath, described how he made the connection between Mr. Fink and the yeshivah.

“In my capacity on the board, I knew that the yeshivah was looking to hire a new principal for the secular studies department, and I thought he would be a perfect fit. I introduced him to Rabbi Aharon Braun, the executive director, and he was duly impressed.

“When the members of the board interviewed him and saw his expertise and passion for education, he was hired. For more than three and a half decades, whenever he proposed some new program for the yeshivah, the board knew that it was chosen for the benefit of the students, and they somehow found the funds for it. They relied on his wisdom and professionalism, and they respected his opinion.”

His dedication to the students of the yeshivah and to his staff was legendary. At times, he would attend conferences where new and innovative methods were introduced, and would then bring them back to implement them in the yeshivah. If he thought it would be beneficial, he would invite a teacher to join him at the conference.

Rabbi Asher Sabo, Menahel of the yeshivah ketanah, spoke of the way he worked hand in hand with the hanhalah of the limudei kodesh department. If there was ever a problem with a child in the afternoon, he discussed it with us, he said, and he was interested in knowing how the students were doing in the morning. Each new idea or program was discussed, and a decision was made which was mutually favorable to both departments.

“His devotion to the students at times overwhelmed him emotionally,” said Rabbi Shmuel Goldstein, Menahel of the yeshivah ketanah. “We would often attend the bar mitzvah of a talmid together, and when a child was sick, we went together to be mevaker choleh. He felt so deeply for them that I witnessed him in tears.”

“He celebrated the afternoon successes of the students with the limudei kodesh Menahalim, and was equally happy to hear how a talmid was being matzliach in his limud haTorah. If there was a problem with a student in the morning, he made it his business to assist in the afternoon, and any problem in the afternoon was discussed with us. There was unity, and we worked as ‘yad achas — hand in hand.’”

His staff always knew that he stood behind them and cared for their success. He provided them with their favorite drinks, stocked the fridge with water bottles and even took out a personal loan to help teachers when the yeshivah was late with payroll. He complimented them on their hard work and offered advice in a non-threatening way. All this and more was always done with his constant, warm smile.

“He encouraged collaboration to help us grow and learn together,” wrote one of the longtime teachers of his staff. “His attention to detail in every situation, from complimenting to critiquing, helped us grow as educators.”

One of his proudest achievements was helping the children grow in literacy skills. “He wanted every yeshivah boy to be able to read and write on a respectable level,” said Rabbi Stern. “He introduced the resource room before it was in vogue, and other mosdos came to him for advice on how to improve their own programs, which he always provided graciously.”

Reb Yitzchok’s levayah was held Thursday morning in Yeshiva Torah Vodaath, and was attended by the Roshei Yeshivah, Menahalim, Rebbeim, talmidim and staff.