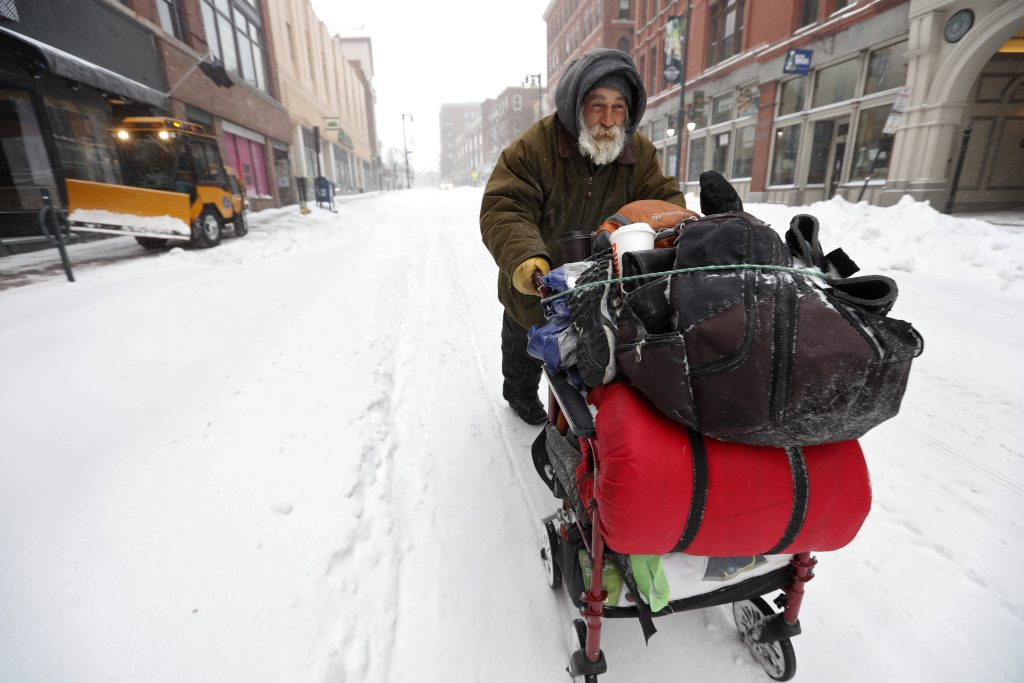 A major winter storm that has brought some of the coldest temperatures of the season covered a large swath of the U.S. in snow as it wreaked havoc on air travel and caused slick road conditions throughout New England Sunday.

Nearly 5,000 flights were canceled Sunday around the country, with Boston Logan Airport being one of the hardest hit, according to FlightAware, a flight tracking company. The National Weather Service issued winter storm warnings or advisories for part or all of at least 15 states stretching from southeast Missouri to the northern tip of Maine.

The storm was caused by the clash of an Arctic high pressure system with a low pressure system coming through the Ohio Valley, said National Weather Service meteorologist Dan Hofmann.

“It happens that this one is going through a relatively high population area,” Hofmann said.

Parts of northern New England could see up to 2 feet of snow, which will be followed Sunday night by bitter cold and wind chills as low as 35 below zero in parts of Vermont, Maine and New Hampshire.

Some New Englanders welcomed the fresh snow. Nicholas Nicolet and his 6-year-old son Rocco got outside early Sunday morning to enjoy the snow in Montpelier, Vermont, as they cross-country skied on the city’s sidewalks during the storm.

“We think it’s great,” said Nicolet, who said he and his son were out the door by 7 a.m.

New York City and the metro region escaped any snowfall, as warm temperatures Saturday night and Sunday meant that the precipitation came down mainly as rain.

The storm will bring severe cold from Sunday evening into Monday, with expected wind chills in the teens in the New York City area and well below zero around Albany.

Earlier, the system dumped up to 10 inches of snow on parts of the Midwest, Saturday.

A plane carrying 129 people skidded from a slick runway at Chicago’s O’Hare International Airport Saturday. No injuries were reported on the United Airlines flight as it arrived from Phoenix, Chicago Fire officials said.

In Kansas, a snowplow driver was killed when the plow drove onto the shoulder of a road and rolled over, throwing him under the vehicle. It wasn’t clear why the driver had moved to the shoulder from the roadway.

A 15-vehicle crash on slippery roads blocked a section of Interstate 55 in southeastern Missouri near Ste. Genevieve Saturday afternoon and drivers were urged to find an alternative route. In Detroit, many motorists were moving well below posted speed limits along freeways due to slushy conditions. Amtrak canceled some trains Saturday from Chicago to Washington and New York and between New York and Boston and Pennsylvania on Sunday.

As the storm system moves east, the frigid Arctic air behind it was expected to envelop many parts of the Midwest where it had just snowed.

“The air that it is bringing down with it is very, very cold,” Hofmann said.