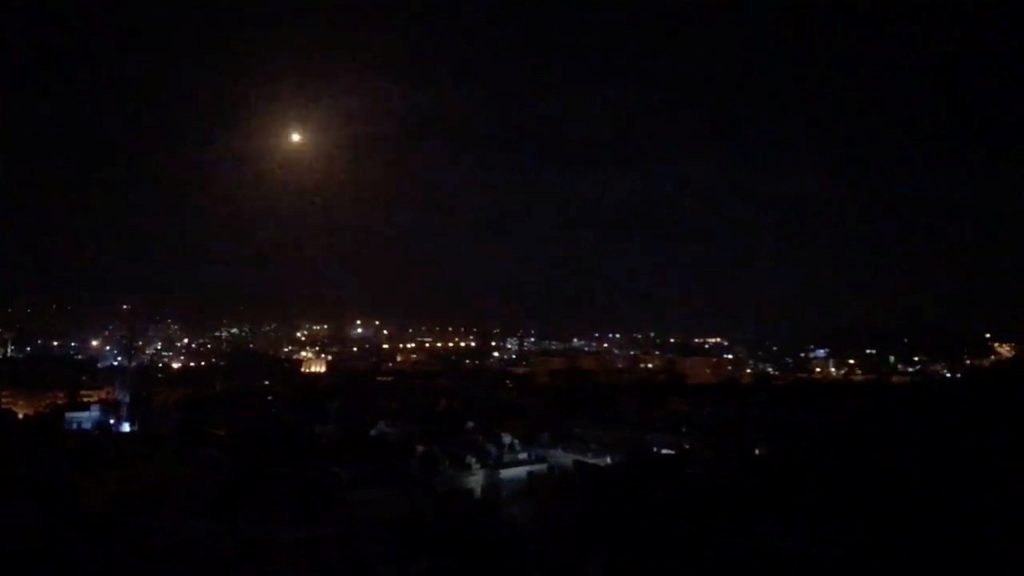 The Israel Air Force (IAF) on Sunday night carried out an extensive attack on Iranian targets inside Syria in response to a rocket fired by the Iranians at the Hermon skiing resort earlier in the day.

The IDF stated that Iranian Quds Forces operating in Syria launched a surface-to-surface rocket from Syria aimed at Israel’s Golan Heights. The Iron Dome Aerial Defense System intercepted the rocket. No one was injured and no damage was caused by the attack.

In response, the IAF carried out massive strikes against Iranian Quds targets in Syrian territory.

The Quds military sites in Syria hit by the IAF included munitions storage sites, a military site located in the Damascus International Airport, an Iranian intelligence site and an Iranian military training camp.

“By firing towards Israeli civilians, Iran once again proved that it is attempting to entrench itself in Syria, endangering the State of Israel and regional stability. We will continue operating determinedly to thwart these attempts,” the IDF stated.

The IDF added that it holds the Syrian regime “responsible for everything taking place within Syria” and warned them against “targeting Israel or permitting others to target Israel from their soil.”

“We are prepared for all scenarios and will continue operating as needed to defend Israeli civilians,” it concluded.

Syria’s SANA news claimed that Syria’s air defenses confronted an Israeli attack and “prevented it from achieving its objectives.” The report said that the attack included land and air strikes and successive waves of guided missiles.

A Syrian military source quoted in the report said that “immediately our air defenses dealt with the situation and intercepted the hostile missiles, downing most of them before reaching their targets as they continue their heroic response to the aggression.”

The Iranian attack on the Hermon occurred shortly after Syrian media claimed it thwarted an Israeli strike on targets in the south of the country.

Following the tensions on the border with Syria, the Hermon resort was shut down for skiers.

The last time the IDF provided extensive information on its strikes in Syria was in May 2018 when the IAF carried out multiple strikes against Iranian targets in Syria in response to an Iranian attack on IDF bases in the Golan Heights.

Prime Minister Binyamin Netanyahu, who made a historic visit to Chad on Sunday, stated that Israel has “a permanent policy: To strike at the Iranian entrenchment in Syria and hurt whoever tries to hurt us.”

“This policy does not change whether I am in Israel or on an historic visit to Chad. This policy is permanent,” he underscored.

Iran’s military build-up in Syria remains a red line for Israel, which has carried out thousands of attacks to thwart the Iranian entrenchment in the war-torn country.