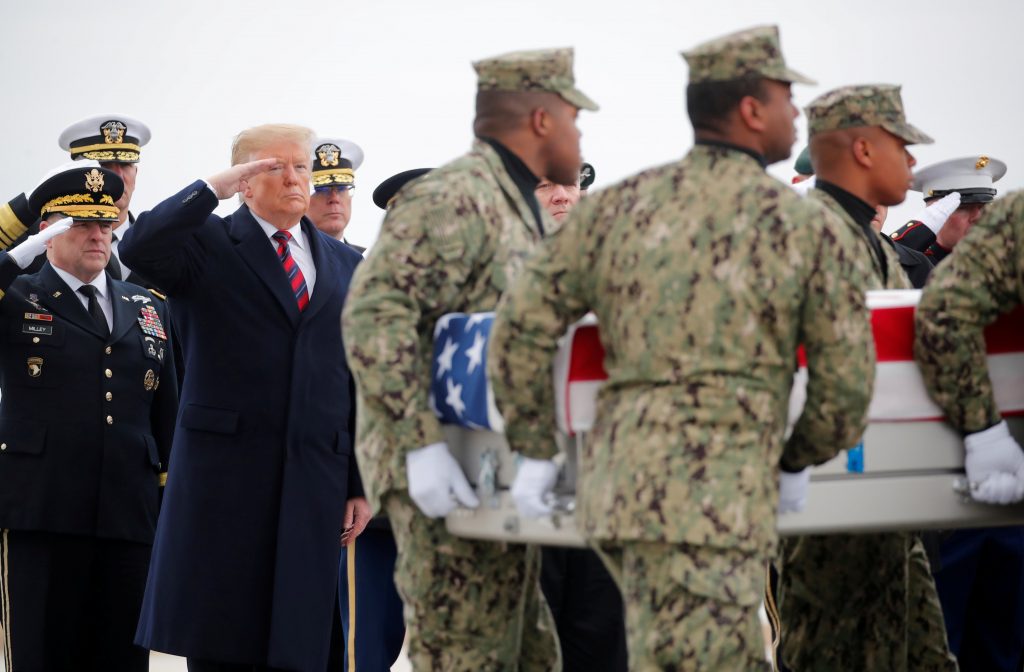 U.S. President Donald Trump traveled to Dover Air Force Base in Delaware on Saturday to receive the remains of four Americans killed in a suicide bombing in northern Syria.

Trump, locked in a battle with congressional Democrats that has led to a nearly month-long partial government shutdown, announced his trip via a predawn tweet, saying he was going “to be with the families of 4 very special people who lost their lives in service to our Country!”

Trump told reporters on the South Lawn of the White House prior to departure that he planned to meet the families, a duty which he said “might be the toughest thing I have to do as president.”

He was greeted by military staff at Dover Air Force Base after a short flight from Joint Base Andrews, but did not speak to reporters before entering his motorcade.

Flanked by military officials, Trump, Secretary of State Mike Pompeo and acting Defense Secretary Patrick Shanahan filed up a ramp leading onto a military transport aircraft, where a prayer was given to honor the memory of Scott Wirtz, a civilian Department of Defense employee from St. Louis.

Trump filed down the plank and saluted while six service members clad in fatigues and white gloves carried an American flag-draped casket carrying Wirtz to a waiting gray van.

The Dover base is a traditional hub for returning the remains of American troops abroad.

The United States believes the attack that killed the Americans was the work of Islamic State terrorists.

Trump announced last month that he planned to speedily withdraw U.S. troops from Syria, but has since said it does not need to go quickly as he tries to ensure safety of Kurdish allies in northern Syria who are at risk of attack from neighboring Turkey.

Trump told reporters on Saturday that his Syria policy has made progress but that some work remained in destroying Islamic State targets. He defended his plans for a withdrawal.

“It’s moving along very well, but when I took over it was a total mess. But you do have to ask yourself, we’re killing ISIS for Russia, for Iran, for Syria, for Iraq, for a lot of other places. At some point you want to bring our people back home,” he said.

In addition to Wirtz, those who died during the Wednesday attack in Manbij, Syria, were Army Chief Warrant Officer Jonathan Farmer, 37, of Boynton Beach, Florida, and Navy Chief Cryptologic Technician Shannon Kent, 35, identified as being from upstate New York, the Department of Defense said in a statement.

The Pentagon did not identify the fourth person killed, a contractor working for a private company. U.S. media identified her as Ghadir Taher, a 27-year-old employee of defense contractor Valiant Integrated Services.